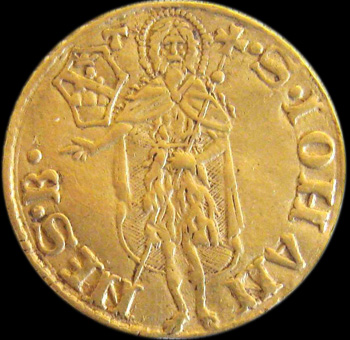 Italian Florin of 1462, series XXVII,
with image of St. John the Baptist
and his legend - S.IOHANNES.B

What is a Florin?

Florin was the name given to a type of gold coin first issued from the Republic of Florence in AD 1252. Since then, the name florin has been "adopted" by several other nations and used for coins of various denominations in various times. So when someone speaks of a florin, one must ascertain which florin they are referring to, as the florins of various countries are not necessarily directly related to one another.

The very first florins were not English, but were from Florence, hence the name Florin. They were struck in gold from AD 1252 to 1533 by the Republic of Florence, a city-state in modern-day Tuscany, Italy. This coin (or ones very similar) became the dominant monetary denomination of Western Europe for large-scale transactions for several hundred years. The original gold florin (called the "fiorino d'oro" by the Florentines) contained 54 grains of fine (0.999) gold, 0.1125 troy ounces. Its weight is said to have been chosen to equal the value of the Lira (i.e. "pound" of silver) of the day - making it effectively an early form of gold "pound coin". However, it will become apparent that the pound being used at the time was probably either equivalent to the Tower Pound, or one directly related to it: The Tower Pound of 5400 grains divides perfectly into 100 of these coins. The rapid popularity of the coin was due in part to convenience; it was much easier to carry than an equivalent weight of silver bars, which had been the main medium of large-scale monetary exchange beforehand. The prominence of the coin was no doubt also driven by the enormously wealthy and powerful Florentine banks of the era. [1]

In 1285 the Republic of Venice, a neighboring state, commenced production of an equivalent coin - the ducati d'oro. This had an almost identical weight and became a dominant trade coin in oriental trade for several centuries. Other countries followed suit, creating equivalent golden coins intended to be compatible in international trade. In Europe these collectively became known as "ducats" and many nations minted them. [2]

In 1343, King Edward III of England wished to create a gold coin compatible with the Italian and French gold coins, which were in wide use by that time. He commissioned the design of the first English florin. It was specified by an indenture (legal contract) of 1343 that fifty of the coins would be made from each Tower pound of fine gold - meaning that the coin weighed 108 grains, exactly double that of the Florentine coin and the petit florins of France. For this reason it is sometimes seen referred to as a double florin.

At the same time, a "single Leopard" (S.1477) or "half florin" of 54 grains and a quarter florin (S.1478) or "helm" of 27 grains were also created for smaller transactions. The single leopard featured a leopard sejant with a royal banner and the helm featured a helmet surmounted by a crowned lion, on a field of 10 fleurs.

The English gold florin coin featured a glorious design by George Kirkyn and Lotte Nicholyn of Florence. The English florin was also known as the double leopard owing to the leopards (actually lions [7] ) either side of the King on the coin's design. The name leopard is used because this is the French heraldic term for a lion passant guardant. [8] The reverse of the coin features the Royal cross within a quatrefoil, with a leopard / lion in each spandrel. The legend on the reverse, in elegant Lombardic lettering, reads IHC: TRANSIENS: PER: MEDIVM: ILLORVM: IBAT: ("But Jesus passing through their midst went his way") The face value of the coin was set to be equivalent to six silver shillings - however it appears that a misunderstanding of the gold-silver price ratio caused the downfall of the coin: At the time of their release in 1344, the florin's gold content was worth less than their stated value, meaning that merchants would not accept them! This disaster meant that the coins were recalled, demonetized on August 20th 1344 and melted down, being subsequently replaced by the Gold Noble which became a successful, popular coin.

The English gold florin is considered by aficionados to be one of the most magnificent English coins ever made; however owing to the recall, only three examples are known to exist. Two were discovered in the River Tyne by children in 1857 and one was found by a metal detectorist "in the south of England" in 2006. The 2006 coin sold at auction for a (then) record price for a British coin - £460,000. The other two gold florins are in the British Museum.

Curiously, the monetary failure of the English gold florin was a case of history repeating itself: The Gold Florin was not the first but the second English gold coin to be produced and then recalled since 1066, the first being the gold penny of King Henry III (1216–1272). Prior to this time, the silver penny was the only denomination struck in England and the minimal need for larger denomination coins was met by Byzantine or Arabic gold or silver coins. (Smaller denominations were created by cutting the silver pennies into halves or quarters). The gold penny, with a value of twenty pence, was introduced in 1257, but its value too was chaotic - the gold in the coin being worth twenty-four pence by 1265! This meant that people did not wish to trade them, and again almost all were melted down.[3][4][5][6][7] Nor would this be the last time that the fluctuating gold-silver price ratio caused difficulties in coinage - indeed it has been argued that the challenge of having two precious metals in currency has never been fully resolved. [10]

For five hundred years no further English florins were produced and the coin seemed confined to history books. However in 1848 a new silver coin was one of those being proposed; valued at one tenth of a pound or two shillings and with a weight in proportion to the weight of the other silver coinage of the day. Various names for the coin were put forward including Centum, Decade and Dime - but, perhaps inspired by the "Gothic revival" under way in the 19th century, and by the fact that other countries had florin coins of similar size or denomination, the ancient name "florin" was chosen for the coin. [3]

The 1848 florin was the first of the new silver florins. Only a small number were made, as patterns, and these are now scarce. The official release commenced in 1849 with 413,820 florins being recorded as minted in that year.

There was in fact one further English gold florin - and this one is practically as rare as the original: In 1922 a trial proof in gold of the florin (ordinarily silver) was struck. Only a very small number of these coins (5?) exist; one sold at auction in 2004 for £9,000.