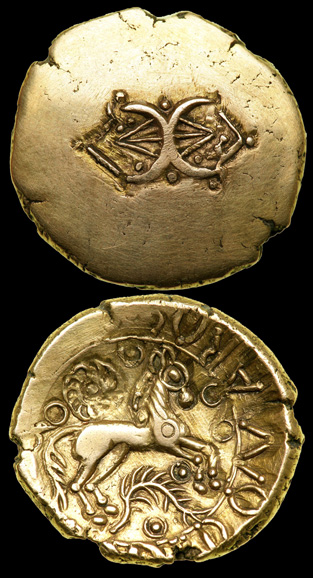 The civilization of the Celts is equally enchanting and mysterious. Known to the greater part of the Roman Empire as Hyperborea[1] , and then referred to as Gaul prior to, and after the conquest of Gaius Julius Caesar[2] , the land of the Celts and its varied tribes and minorities which is today the realms of Great Britain, Ireland, Scotland and Wales holds a rich treasure trove of history, art, culture, mythology, and even that glittering prize – gold.

Renowned for their extensive skills in metalworking and design and well-known for their wonderful examples of knot-work jewelry, the Celts were also a culture that prided itself in trade. Although once considered by much of the Western world as a backward barbarian race filled with superstitions and foul-craft, it has been realized that the Celts were a deeply religious people who were masters of stealth combat, herbological lore, and intricate metalworking.

The first examples of Celtic gold coins were inspired by the Celts' close trade with the Greeks, earning them a place in the mythology of the Greeks as the fabled paradise of Hyperborea. [1] Celtic gold currency came about sometime during 400 BC with the earliest examples bearing decidedly Greek iconography and even letters. Some of these early coins even bore images of Philip II of Macedon and his legendary son Alexander the Great. [2] The production of such coins lasted until well into the 1st century BC where their images, legends, motifs and overall iconography became more their own – employing symbols and devices taken from their own mythology or featuring the busts and names of their own heroes. [3]

One of the most notable motifs in Celtic gold coinage is the horse (see example left), a highly valued animal in Celtic culture and lore that occurs repeatedly in much of its coinage, usually featured on the reverse side of the coin. This constant motif is generally thought to have derived from earlier Greek influences, as some of the earliest Celtic coins bore images of the sun god Apollo and his chariot. This is a highly debatable attestation however, as Celtic culture itself is replete with mythologies featuring horses rushing towards battle with riders atop them – a motif that later became commonplace in Celtic gold coins during its rebellion against Rome.

Celtic gold coins are much of an enigma for some historians - as Celtic Gaul and Britain were small countries that did not possess much influence, power, or vast territories. Despite this, they were able to mint currencies of a highly precious metal, albeit with more rudimentary methods than nations of a greater span of influence. Celts also created other forms of currency, in silver and other metals, through either casting or striking the designs unto a prepared round of metal. In casting, molted metal was poured unto a mold of clay tooled with designs which was then left to cool. The mold was then broken after cooling.

Cast coins, especially examples of gold ones are some of the finest examples of Celtic gold coinage, replete with highly ornate details usually featuring a wide and weird coterie of mythological images – even of giants trailing decapitated heads in their wake, hounds, skulls, Gods and Goddesses and other rich imagery that was completely divorced from its former Graeco-Celtic synthesis. Struck coins were usually made of soft metal, such as pure gold which was molded into a round shape on a clay mold and then cooled. It was then tooled with a design using an iron or bronze die that would imprint the design on the soft metal round. [4] While not as ornate as cast gold coins, die-struck coins extensively featured Greek or Roman letters – an oddity for Celts, as their own languages (ogham and runic) were almost never employed in their metalworking, with very rare and scarce exceptions.

The Celts were also a people that flaunted the virtues of their leaders; they took as a prototype the banal coins of the Roman Empire (in the latter part of the 1st century BC until well into their final assimilation into a Roman state) and peopled their gold coinages with images of their tribal chieftains. Celtic coinages (gold, silver, gold, and bronze) later featured more 'commonplace' symbols such as the triskele (triple spirals) and the principle of three interlocked figures usually on the obverse side of coins. [5]

Oddly, Celtic gold coins lack the trademark knotwork found on most examples of Celtic metalworking. While a number of Celtic coins may appear as legitimate gold coins, some of these 'gold' Celtic coins are actually blatant forgeries made of brass or some other cheap metal and simply coated with a thin layer of gold, a practice more commonly done on struck coins than cast ones. [6]

Celtic gold coins are of extreme interest to historians and collectors due to their historical value, rarity, and sheer diversity. Despite being well known during the Iron Ages and Roman Age of Gaul, Celtic gold currency was only circulated locally, usually made in very limited amounts by varying tribes, depending on the availability of the metal. After their assimilation to Rome, their own unique currency slowly disappeared, to be replaced by the permitted Roman currency. Today, examples of Celtic gold coins are extremely sought-after, although surprisingly cheaper by far than the more 'famous' Roman gold coins or English gold coins also highly coveted by collectors and investors alike. [7]