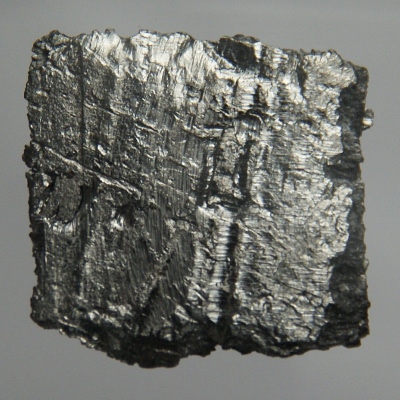 Erbium is a silvery-white colored metal and one of the lanthanide series of elements. It is element number 68 in the periodic table and has the symbol Er. Pure erbium is fairly stable in air, tarnishing slowly. It burns readily to produce erbium (III) oxide. It reacts slowly with cold water and more rapidly with hot water to form erbium hydroxide. [1]

Erbium was first discovered in 1843 by Carl Gustaf Mosander. Working with the mineral gadolinite, Mosander separated it into three separate components, which he named yttria, erbia and terbia after the town of Ytterby in Sweden, the source of the mineral. Erbium oxide is pink, terbium oxide yellow and yttrium oxide is white and it was these oxides that were the components named by Mosander. Confusion between the names seems to have happened: Terbia was renamed erbia in 1860 and erbia was renamed terbia after 1877! Erbia contained erbium oxide, however pure erbium metal was not obtained until 1934, when erbium chloride was reduced with potassium in a substitution reaction. [1]

Erbium is the 45th most abundant element in the earth's crust; more common than lead overall, however as with the other rare earth elements, it is seldom found in high concentration and the multi-stage process required to separate it from its ore is complex. Erbium is processed from minerals such as xenotime, monazite and euxenite, and in ion adsorption clays such as those of southern China. [1] Erbium is also found in the mineral churchite, which is hydrated yttrium erbium phosphate.

As with other rare earths, China is the main global supplier. [1] World erbium production is around 500 tonnes per year. [2]

Erbium is used in laser technology. Erbium is employed as a dopant for yttrium aluminium garnets, which are used as a lasing medium in solid state lasers. Er:YAG lasers emit light at 2940 nm, which is in the infrared spectrum and has certain specific medical applications such as laser skin resurfacing, dentistry, bone surgery and wart removal. [4]

One of the most interesting uses of erbium is as a signal amplifier in fiberoptics. The distance light is able to be transmitted in fiberoptic cables is limited by a phenomenon called Rayleigh scattering. Higher wavelengths of light are more seriously affected, so red light can be carried further - however too far into infrared and the light is absorbed by the glass. Erbium (III) ions, optically pumped at 980nm or 1480nm emit light at 1530nm. The wavelength of erbium-emitted light at 1530nm falls very close to the "ideal" wavelength (1550nm) for minimal signal loss in optical fibers. This means that erbium is an optimal material for use as a dopant in laser optical amplifiers. [1] [3]

Erbium compounds typically have a pink color, and erbium oxide is used as a colorant in decorative glass, porcelain and cubic zirconia. [1]

Erbium has some use in metallurgy. It is added to vanadium alloys in order to improve their workability and lower their hardness. It is alloyed with nickel to form an alloy that is used in cryocoolers (devices used to generate cryogenic temperatures) as it has very high specific heat capacity at low temperatures. More recently, an alloy of erbium, cobalt, ytterbium and nickel has increased the specific heat capacity further. [1]

Erbium has also been used in nuclear control rods. [1]

Erbium also has use in photographic filters and is added to lenses of safety glasses used in welding, metal working and glass blowing, owing to its ability to filter out infrared light.

Erbium iodide is used as a heat and light stabilizer for nylon fabrics. [5]

Erbium selenide is used in infrared detection and imaging. [6]

Erbium phosphide is a semiconductor and has found use in laser diodes and high power, high frequency applications. [7]

Erbium is also used in certain phosphors. Erbium and titanium codoped gadolinium oxysulphide (Gd2 O2 S) phosphors have been investigated for their characteristic long-lasting luminescent afterglow properties. Erbium is also being researched for use in special high security ink, for uses such as in banknotes. Together with ytterbium it can create a special infra-red signature which could be detected with an infra-red laser.[9]