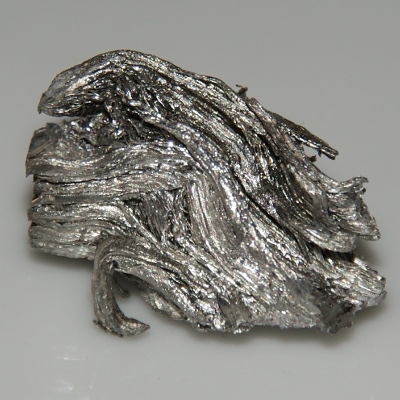 Holmium is a silvery-white colored, soft metal. It is one of the lanthanide series of elements, has the symbol Ho and is element number 67 in the periodic table. [1] Although a rare earth element, holmium is not excessively rare, being around 20 times more common than silver. [2]

Holmium's most well known quality is that it has the highest magnetic strength of any element. Holmium is moderately reactive. It will tarnish in warm, moist air, forming a pale yellow oxide.

Holmium is considered to be one of the "heavy rare earths", together with dysprosium, erbium, europium, gadolinium, lutetium, terbium, thulium, ytterbium and yttrium. [3]

Holmium was first observed by Marc Delafontaine and Jacques-Louis Soret in 1878, who noted its spectrographic absorption bands. However it was also discovered by Swedish scientist Per Theodor Cleve, in 1878 - and Cleve succeeded in isolating its oxide from rare earth minerals. Other new elements had been discovered in the oxides of rare earth elements, and Cleve found two new materials in erbium oxide. One of which, a brown material, he named holmia, after the city of Stockholm. He named the other material thulia - thulium oxide. [4]

Holmium, like other rare earth elements, is not found naturally as a free element. It is found at low concentrations in rare-earth minerals such as gadolinite, bastnasite and monazite sand. Extraction of holmium is performed via the same multi-stage, complex process used to extract other rare earth elements, and as with the others, the world's primary source is currently Bayan Obo, China. Holmium makes up about 1.5% of the rare earth content of the Chinese ore. [1]

Holmium uses tend to require small amounts of the material: Global holmium production is stated to be around 10 tonnes per year. Although reserves are estimated at around 400,000 tonnes, holmium's low concentration in minerals means that although not one of the most "in demand" rare earth elements, prices remain relatively high. [5]

Holmium has relatively few uses - although given its unusual magnetic qualities, it may find important use in the future.

Holmium is used in the creation of maximum field-strength magnets, as a pole piece or magnetic flux concentrator. [2]

Holmium can also be used to color glass blue. [6] Holmium oxide is used to impart yellow or red color to glass, ceramics or cubic zirconia. Holmium oxide in solution is used as an optical calibration standard in scientific instruments. [1]

Holmium is used in solid-state laser technology, and holmium lasers have medical applications, such as cancer, kidney stone, dentistry and enlarged prostrate treatment. Yttrium iron garnet and yttrium lanthanum fluoride solid-state lasers are doped with holmium and operate at 2.08 micrometres, a frequency said to be "eye safe". [1]

Holmium has been used as a nuclear control rod material, owing to its ability to absorb neutrons. [1]

Holmium phosphide is a semiconductor - and has use in laser diodes and high power, high frequency applications. [7]