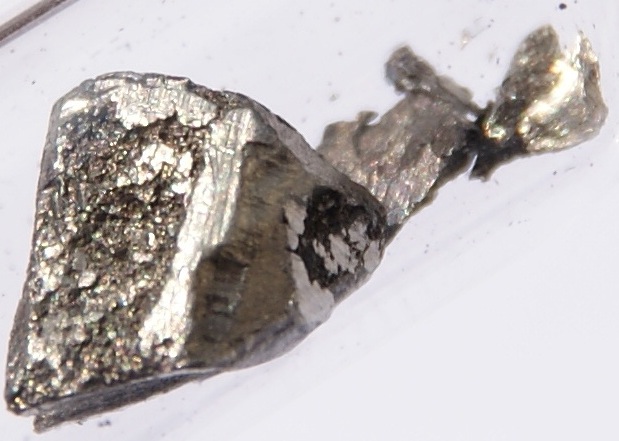 Lanthanum is a silvery-white metal and number 57 in the periodic table. It has the symbol La and is the first element in the lanthanide series of elements. It is reactive and will oxidise in air over time. [1]

Lanthanum was first discovered unexpectedly in 1839 by Carl Gustav Mosander, a Swedish chemist, in a sample of cerium nitrate. It was one of the first of the lanthanide elements to be discovered, and Mosander named its oxide lantana after the Greek for "escapes notice". Lanthanum was not obtained in pure form until 1923 - and this is typical of the lanthanide elements. Their presence was often either predicted or observed, but owing to their similarities, many were not completely isolated until advances in chemistry enabled their extraction. [1] [2]

As with many of the other lanthanides, lanthanum is extracted from the minerals monazite and bastnäsite. As the lanthanides often have similar qualities, the process is complex and involves several stages and treatment with various chemicals to separate the various elements. Lanthanum is one of the more common of the rare earth elements, and around 12,500 tonnes are produced per year globally. To put this figure into perspective, cerium production is at 24,000 tonnes per year, neodymium at 7,300 and many of the rare earth elements are under 500 tonnes / year. [3]

Lanthanum has a diverse variety of uses. One of the best known uses of lanthanum is as a component of "misch metal", which continues to be used in the flints of lighters over 100 years after these were invented by Carl Auer von Welsbach. Misch metal is pyrophoric, which means that it gives off sparks when scratched. Misch metal contains around 25% lanthanum, 50% cerium, 5% praseodymium - with the remainder being a mix of other lanthanides. Misch metal (aka "mischmetal") has been produced from either monazite or bastnasite, and once the mixed rare earth element compounds found in the mineral have been reduced to pure metals, the metal content is in the ratio which occurred naturally in the rock. In modern times, the more valuable elements are removed from misch metal for separate sale, meaning that the modern misch metal may contain only lanthanum and cerium, with perhaps praseodymium. As the elements are similar, the exact mix of misch metal used for flints is dictated more by economic factors than by the requirements for specific ratios in the end product. As misch metal would be too soft if used on its own, it is typically combined with iron and magnesium oxides in order to form a more durable flint yet one which still gives a bright spark. [3] [4]

Lanthanum carbonate is used as a medication, under the brand name Fosrenol®. It works as a "phosphate binder", preventing absorption of phosphate from the stomach and is used to reduce levels of phosphate in the blood of kidney disease patients. [5]

One of the most significant uses of lanthanum by mass is its use in the batteries of nickel-metal hydride batteries used in hybrid and all-electric cars. For example, the batteries required by each Toyota Prius require 22-33 pounds of lanthanum. Nickel-metal hydride batteries It is possible that the amount of lanthanum used in hybrid will increase as manufacturers push to obtain greater mileage from their vehicles. Currently, over 2 million vehicles use NiMH batteries, and NiMH batteries are also extensively used in consumer electronics such as laptop computers. [6] It is difficult to predict whether demand for lanthanum will rise or fall in this arena - because although demand for rechargeable batteries is increasing, there are several other technologies available, and the drivers for innovation are strong. Other chemicals currently used for batteries include lead-acid, nickel-cadmium (ni-cad) and lithium ion. NiMH is currently in great demand but if a new technology is developed which has better parameters for cost, durability, weight, and power storage, demand for NiMH may fall. [7] Due to the fact that lanthanum is expensive to purify, a misch metal is used which also contains other rare earth elements. [1]

Lanthanum is one of the rare earth elements used by the motion picture industry for studio and projector lights. [1]

Lanthanum is used by the glass making industry. Lanthanum oxide added to glass raises the refractive index more than lead, without too much negative effect on light dispersion. For this reason, lanthanum oxide is used in high performance optics such as cameras and telescope lenses. [2] It is also used in infra-red absorbing lenses and alkali-resistant glass. Lanthanum fluoride is used in ZBLAN, the most stable heavy metal fluoride glass and one used in fibre-optics. ZBLAN has superior transmittance in the infra-red spectrum. [1] [8]

Lanthanum is used in steel making - and small amounts can increase its workability and impact resistance. [1]

Lanthanum is used in hydrogen sponge alloys, which have the remarkable quality of being able to absorb up to 400 times their own volume of hydrogen in a reversible process. Hydrogen sponge alloys are being researched for their usability in hydrogen storage tanks which may be able to overcome the challenges involved in storing compressed or liquid hydrogen. [1] Other rare earth elements such as yttrium may potentially be used for this application. Also possible is the use of palladium, which can store up to 900 times its volume of hydrogen. [9]

An important use of lanthanum is in petroleum cracking catalysts. Although a number of materials could be used for this application, lanthanum-rich material is the most active and the most energy-efficient for petroleum production. [10]