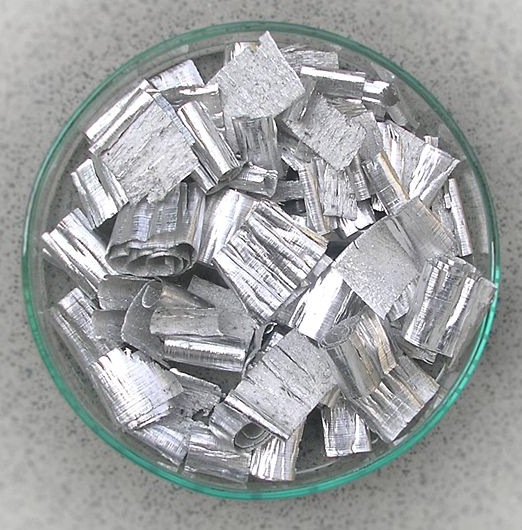 Magnesium is a light, silver-colored metal. It is element number 12 in the periodic table of the elements and has the symbol Mg. Magnesium is a critical element in human biology and its ions are essential to living cells. It is also found in chlorophyll and is thus essential to plant life. [1]

Magnesium is highly reactive and is thus not found uncombined in nature. It is produced either from ores (such as olivine, magnesite and dolomite) or from seawater and natural brines (magnesium oxide is soluble in seawater.) [2]

It burns with an extremely bright white light and magnesium fires can reach temperatures of 3100ºC. Magnesium fires are difficult to extinguish because it burns not only in air but underwater (forming magnesium oxide and hydrogen), in nitrogen and in carbon dioxide. [1]

Solid magnesium reacts slowly with water to form magnesium oxide and hydrogen - but when molten or burning it reacts violently with water. If attempt is made to extinguish a magnesium fire with water, it will only intensify the blaze. [1]

Magnesium was first prepared by Sir Humphry Davy in 1808 when he electrolysed "magnesia" with mercury oxide. [1]

Magnesium is derived from several minerals, including dolomite and magnesite. It is also produced from sea water and natural brines. [1]

Magnesium has a very wide range of uses. Its most common use is as a structural element - and it is the third most commonly used metal in this regard, behind iron and aluminium. Magnesium is often added to aluminium alloys in order to improve mechanical characteristics. [1] Aluminium alloys for beverage cans include magnesium. Duralumin and magnalium are magnesium alloys.

Magnesium alloys have been used as high-grade automotive components - in particular wheels "mag wheels", engine blocks (Porsche, BMW and others). Racing cars from the 1950's to the 1970's were made with magnesium body panels but these led to disastrous fires in crashes. [1]

Magnesium is used in aerospace, although applications have been somewhat limited by the fire risk. However, new magnesium alloys are in development for improved suitability. [1]

Magnesium is much used in making consumer goods such as laptops, office furniture, power tools and sports equipment. [7]

Magnesium is also used in incendiaries. It was once widely used in flashlight photography, and is still used in fireworks and pyrotechnics, in flares and emergency firestarters [1] , and as a fuse for thermite. [4]

Magnesium has much use in chemical processing - for example the most major use is to remove sulphur in iron and steel processing. [5]

Magnesium compounds are used in medicine and dietary supplements. Milk of magnesia contains magnesium hydroxide and Epsom salts are magnesium sulphate. Magnesium stearate is used in pharmaceuticals - as an agent which helps prevent tablets from sticking when they are pressed. [1]

Magnesium is also used in manufacture of lightweight wheelchairs and related medical equipment. [6]

In conclusion, magnesium is important to many industrial processes. Due to recent slowdown in automobile manufacture and the recession of 2008-2009, also due to competition to aluminium cans from plastic bottles, magnesium is in abundant supply and prices have fallen. [7]