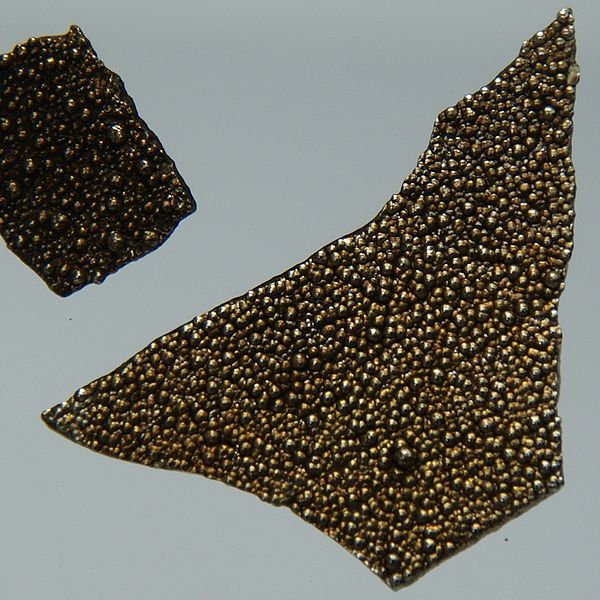 Manganese, element no. 25 in the periodic table, is an important metal in industry. It resembles iron and is sometimes found in combination with iron in nature. Manganese is also a required trace mineral for living organisms. [1]

The use of Manganese has a long history. In the stone age manganese oxides were used as pigments and have been found in cave paintings 24-30,000 years old. [1] It was used by Egyptian and Roman glassmakers and its use as "glassmakers soap" continued to modern times. [1]

In the 19th century it was discovered that adding manganese to steel made it harder. In 1866 the Leclanche cell was invented - a type of battery that used manganese dioxide. The use of manganese dioxide in batteries was the standard for commercially available alkaline batteries in the 20th century. [1]

Manganese is the 12th most abundant element in the earth's crust. It occurs in several minerals, including pyrolusite, braunite, psilomelane, and to a lesser extent as rhodochrosite. Of these, the most economically significant is pyrolusite. Most of the world's manganese resources are in South Africa (around 80%), however there are also significant deposits in Ukraine, Australia, China Brazil, Gabon, India, Ghana and Kazakhstan. [1]

85-90% of the Manganese used in the USA in 2007 went towards steelmaking. It is anticipated that future used of manganese will closely follow trends in steel production. [2] 24% of the manganese used goes towards "I-beams" - steel bars used in construction. [3] [4]

Manganese is used in alkaline batteries - in 2002, over 230,000 tons of manganese dioxide went towards battery manufacture. [1]

Manganese (in the form of methylcyclopentadienyl manganese tricarbonyl / MMT) has been used as a gasoline additive. It is controversial and health hazards associated with this use are debated. [1] [5]

Manganese is also used in plant fertilizers, animal feed and as a brick colorant. [6]

Though a large amount of manganese exists compared to some other critical metals, it is considered a highly critical metal because there is no viable substitute in its major applications. [5]