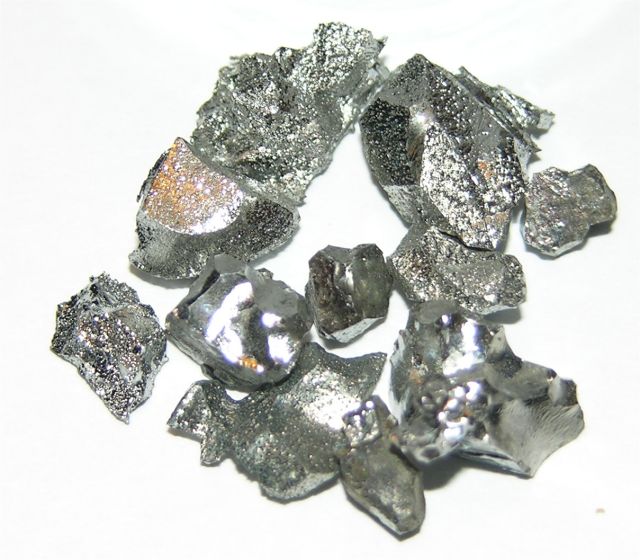 Molybdenum is a silver-colored metal that was discovered in the late 18th century. It does not occur uncombined in nature, but exists in various minerals, the most significant of which is molybdenite. [1]

When pure, molybdenum has a very high melting point (2623ºC) - the sixth highest of any element with only osmium, rhenium, tantalum, tungsten and carbon having higher.

Molybdenum oxidizes above 600ºC but has the useful property that it has a very low thermal expansion coefficient - meaning that it is a useful component of alloys that need to be able to withstand extreme temperatures with minimal change. [1]

The chief industrial use of molybdenum is in the manufacture of stainless steel, cast iron and superalloys. In 2008, 88% of molybdenum usage went towards metallurgy. [2] Molybdenum use is commonplace in steelmaking and molybdenum steels are particularly used where high temperature stability, strength and corrosion resistance are required.

The second biggest use of molybdenum was in catalysts. [2] Molybdenum disulphide is used in the hydrodesulphurization of petroleum and other petrochemicals. Fuels with lowered sulphur content create lower sulphur emissions - and molybdenum is resistant to sulphur unlike other precious metal catalysts; so this use of molybdenum is likely to increase. [4]

Molybdenum tungsten alloy is used for applications involving molten zinc - as it is resistant to corrosion in this scenario. [1]

Another use of molybdenum is in nuclear reactor construction. [2]

Molybdenum has some interesting applications in new "green technology". Molybdenum steels are used in pipes and tanks for biofuels, which require additional protection from the corrosive nature of some of these fuels. [2]

Molybdenum is used in the new thin-film CIGS solar panels. Although the solar cells are made of copper indium gallium and selenium, hence the acronym, a thin layer of molybdenum is used to transfer the electricity that is generated. [2]

Molybdenum is an essential trace element in plant and animal life forms and is sometimes added to fertilizers.[4]

Molybdenum is used in compounds added to PVC as a smoke suppressant. [4]

Molybdenum disulphide is used as a dry lubricant in aerospace [3] owing to its ability to function in extreme conditions of temperature and pressure as well as in a vacuum. [4] It is added to some lubricating greases. It is also used as a heating element material which operates in air at temperatures above 1500ºC. [1]

Molybdenum reserves are said to be adequate for the foreseeable future - however in its main application as a component in steels and alloys, it has no ideal substitute. [5] Molybdenum is thus critical to industry however it appears that only a major interruption to its supply chain would cause major disparity between supply and demand.