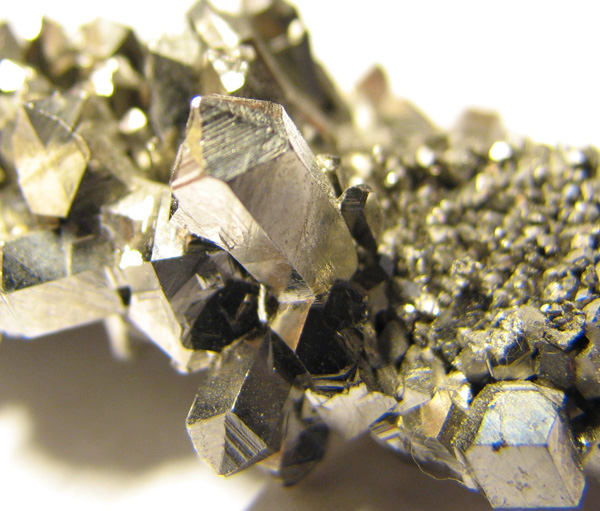 Niobium, formerly (and sometimes still) known as columbium, is element no. 41 in the periodic table. It is a rare transition metal. Niobium has much in common with tantalum, element no. 73, which sits directly below it in group 5 of the periodic table. As might be expected, niobium has similar chemical properties to tantalum and in early 19th century, the two elements were thought to be identical. [1] The connection between the two elements is celebrated in their names, taken from Greek Mythology: Niobium is named after Niobe, the daughter of Tantalus. [2]

Niobium is a soft, grey, ductile metal with low reactivity. It is inert in the body and is considered to have no biological role. It will not even react with the highly corrosive aqua regia, which can dissolve gold and platinum. [2] It will however react with hydrofluoric acid and hydrofluoric / nitric acid mixtures. [1]

Niobium is a somewhat uncommon metal, being the 33rd most abundant element in the earth's crust. Its rarity is unexpected and on account of its high density it is considered that some of the 'missing' niobium may have sunk into the earth's core when the earth was forming. [2] Niobium does not occur as a pure element in nature, but is found in minerals such as columbite - (Fe, Mn)(Nb, Ta)2 O6 , also known as niobite or columbate. Columbite is very similar to tantalite, but having a greater proportion of niobium - and the two are found together in a mineral known as coltan. [1] Niobium is also found in pyrochlore. Pyrochlore is a solid solution series with pyrochlore as the niobium end member and microlite as the tantalum end member. [3]

Around 75% of the world's niobium supply comes from two Brazilian pyrochlore deposits - one at Araxá, Minas Gerais and the other at Catalão, Goiás. The third largest producer is the Niobec Mine in Quebec, Canada, which produces 7%.

Niobium resources are also found in several African countries, Australia, Russia, Afghanistan and Columbia. Coltan (mentioned above), which contains niobium, has unfortunately been embroiled in controversy, as it has been stated to be a "conflict mineral" being mined illegally by militias and used to finance war in the Democratic Republic of the Congo / other conflicts in Africa.

Niobium is a versatile metal with a wide range of uses. The principal use of niobium is in steel manufacture. Niobium is a "microalloying element" (i.e. used in small quantities) used in the construction of special steel alloys. In small quantities (below 0.1%) it has a strengthening effect on steel - and in 1996, 90% of the 44,500 tons of niobium mined was used in the manufacture of high grade structural steel. Niobium steels have numerous uses including pipeline construction and automobile structural components. [1]

As it has a high melting point of 2477ºC, niobium was once used in filament lightbulbs, however it has been replaced in this application by tungsten, which has a much higher melting point of 3422ºC. [2]

Niobium is used by aerospace industries. It is included at up to 6.5% in superalloys such as those in jet and rocket engines on account of its ability to improve temperature stability. It is used at 89%, together with hafnium and titanium, in liquid rocket thruster nozzles, such as those found in the main engine of the Apollo Lunar Modules. [1]

Because of its low reactivity and anodization characteristics, niobium is sometimes used in jewelry and coinage. Niobium can be anodized in a similar manner to Titanium, with a thin oxide layer in a range of permanent metallic colors being formed. [2] [4]

Niobium is also in demand for the manufacture of superconducting magnets. These have a number of uses such as MRI (magnetic resonance imaging) scanners and nuclear physics applications. The International Thermonuclear Experimental Reactor uses approximately 850 tonnes of niobium-titanium and niobium-tin wires. [1]

Niobium has many other uses in a wide variety of technologies and applications, here are some examples: Because of its biological inertness, niobium is used in implanted medical devices such as pacemakers. Pure niobium is used in free electron laser technology. Niobium is used in electromagnetic radiation detectors such as those used in space observatories. It is also used in some arc welding rods, and can be added to glass in order to raise its refractive index and allow thinner lenses in items such as spectacles. [1]