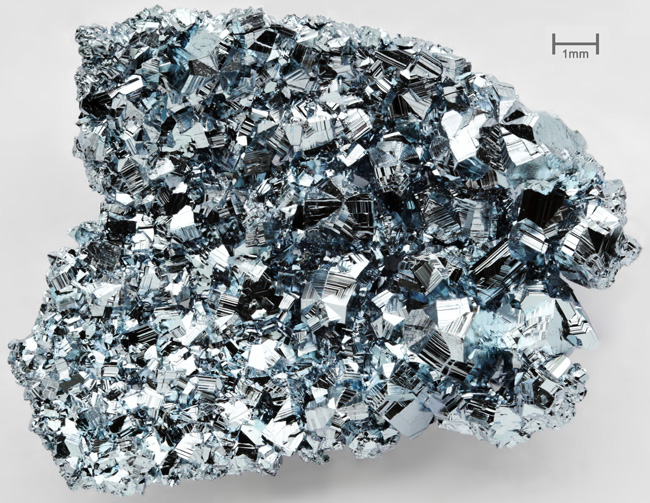 Osmium was discovered in 1803 by Smithson Tennant. For a number of years, chemists working with platinum had dissolved it in aqua regia in order to create soluble salts which could be used for further work. There always remained a small amount of residue which was insoluble. Tennant obtained both osmium and iridium from the residue. He named osmium after the Greek word osme, which means "smell", on account of the pungent smell of osmium tetroxide, a toxic substance. [1]

Osmium is element number 76 in the periodic table. It has unusual chemical properties. It has the highest melting point of any platinum group metal and the fourth highest of any element, at 3033ºC and is extremely hard. It can form compounds in eleven different oxidation states, ranging from -2 to +8. Xenon and ruthenium are the only other elements that can form +8 compounds.

Osmium can occur uncombined in nature, or in alloys with other elements such as iridium. Osmium often occurs together with platinum, and is principally derived nowadays from platinum, copper and nickel ores, in which it occurs as sulphides, tellurides, antimonides and arsenides together with other platinum group metals, from which it is separated. [1]

Osmium is scarce, and according to [3] being the least abundant of all the elements occurring naturally in the earth's crust. It is interesting also to note that all the platinum group metals are scarce, occupying 6 of the last 8 places in the table of abundance of elements in the earth's crust. The other two are gold and rhenium. Osmium is 30 times less common in the earth's crust than platinum, and ten times less common than ruthenium. [3] (Note - these figures can only be estimates tables from other sources do not necessarily place the elements in the same order of abundance.)

Osmium is by far the least used of the platinum group metals: For example 2010 USA imports of platinum were 153,000 kg, palladium 71,000 kg, rhodium 13,000 kg, ruthenium 14,000 kg, iridium 3,500 kg and osmium a mere 14 kg. [4] Another reason for its little use is that osmium tetroxide is highly toxic - and when pure, powdered osmium reacts with oxygen in the air, causing potential problems and preventing many possible applications. For this reason, osmium is most often alloyed with other metals, particularly iridium and seldom used pure.

Osmium was used to make the filaments of lightbulbs in the early 20th century, before being replaced by tungsten, which has a higher melting point. [1] The name of the OSRAM lightbulb company was derived form the words Osmium and Wolfram (old name for tungsten.)

Osmium also one of the early catalysts used in the Haber process, used for the industrial production of Ammonia. However in 1909 an inexpensive iron-based catalyst was discovered and is still in use today. [5]

Osmium is used in alloys with other platinum group metals, and these are used in applications where durability and hardness are required - for example fountain pen nibs, instrument pivots, armor-piercing weaponry and electrical contacts. The stylus in early phonographs was made from osmium before hard gemstone materials such as sapphire replaced osmium. [1]

Osmium has been added at 10% to platinum for use in surgical implants. [1]

Osmium tetroxide is used for staining tissue in electron microscopy. [1]