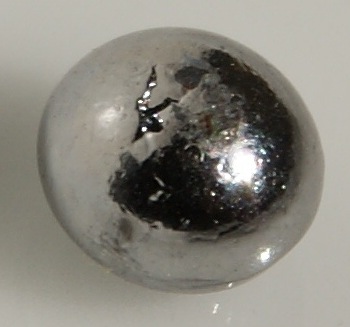 Rhenium is a silvery-white colored transition metal. It is element number 75 in the periodic table and has the chemical symbol Re. [1]

Rhenium has some interesting and unusual properties. It has the highest range of oxidation states of any element; ranging from -1 to +7. It is the 4th densest of all elements (with only platinum, iridium and osmium above it, and has the third highest melting point at 3186ºC, with only carbon at 3642ºC (sublimes, no liquid phase) and tungsten at 3422ºC above it. [1] [2] Rhenium is one of the "refractory metals" - a class of elements that have high melting points and great resistance to heat and wear.

The existence of rhenium was predicted by Mendeleev in the 1860s from an empty position in his newly-invented periodic table. Mendeleev was able to predict certain qualities that a few undiscovered elements would have. Rhenium was first isolated in the 1920s and approximately 660kg of molybdenite mineral was processed in order to yield one gram of rhenium! [2] This gives some indication of that scarcity (and resulting cost) of rhenium.

Rhenium is one of the rarest elements in the earth's crust and is largely obtained as a by-product of the processing of molybdenite, in which rhenium exists in trace amounts. Demand for rhenium is high and supply is small; as a result rhenium is one of the more expensive elements to obtain. In 2010, 99.99% pure rhenium powder was priced at around $2300 / kg and USA consumption was around 42,000 kg. [3]

Rhenium is used in the manufacture of high-temperature superalloys for jet engine parts - and this application comprises 70% of global rhenium use. [3] The superalloys also contain nickel, and typically contain either 3% or 6% rhenium. New superalloys may also contain ruthenium, which improves the stability of the alloy. The high demand for materials for jet engines has meant that alloys with lower rhenium content (1.5%) have been developed. [1]

Rhenium is the most important material added to tungsten alloys. Rhenium improves the ductility (ability to be drawn into wires), machinability and high-temperature stability of tungsten. The more rhenium is added, the better the quality - and so rhenium can be added up to the solubility limit, which is 27%. Rhenium-tungsten alloys can be used in X-ray technology owing to their high melting point and ability to withstand electron impact.[1]

Rhenium has good wear resistance; also its oxide sublimates at 360ºC. This makes rhenium useful for electrical contacts: During switching, a spark is often produced, which can oxidise the contact material. In the case of rhenium, the oxide burns away and so the contact remains clean. [1]

As it has a high melting point, rhenium is used with tungsten to make thermocouples which can be used to measure temperatures up to 2200ºC. [4]

Rhenium is alloyed with molybdenum. Molybdenum alloys superconduct at temperatures below 10 Kelvin. [4]

Rhenium is also alloyed with platinum to make catalysts. Rhenium-platinum alloy catalysts are used for catalytic reforming, used in petroleum refineries to convert low octane rating naphthas to high-octane liquid products such as lead-free fuels. 30% of all catalysts made for this purpose use rhenium. Other processes using rhenium catalysts include olefin metathesis, a process used in the manufacture of medicines, polymers and fuels. Olefin metathesis may use other metals as catalysts, such as nickel, tungsten, ruthenium and molybdenum. [1] [5] Rhenium catalysts are unusually resistant to "poisoning" by phosphorus, sulphur or nitrogen and so are used in hydrogenation reactions. [2] Around 20% of the USA's rhenium use goes towards petroleum-reforming catalysts. [3]

Rhenium is also used in the creation of certain "superhard" materials. Rhenium diboride (ReB2 ) has a similar hardness to tungsten carbide, silicon carbide and titanium diboride, however it exhibits anisotropy, which means that its hardness is very directionally dependant and not uniform in all directions. ReB2 does not require high pressure for its formation. It is the only superhard material created thus far which exhibits metallic behavior - however the "superhardness" of ReB2 is disputed by some sources. [6] [7]