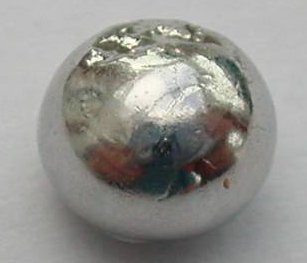 Ruthenium is a hard, silver-white metal of the platinum group of metals. Obscure and very rare, it was discovered in the 19th century.

Ruthenium is typically found together with other platinum group metals. Major sources are the Ural Mountains of Russia, North and South America. It is also found in Canada and South Africa and approximately 12 tonnes is mined per year.[1]

As with platinum and other metals of the group, ruthenium is either produced as a by-product of nickel and copper mining, or as an element occurring in platinum group metal ores. Extraction is a multi-stage chemical process, using different permutations of materials and a series of processes to separate the various metals - for example with the processing of copper ores, first the copper is removed by electrolysis, and the noble metals settle to the bottom of the cell. Aqua regia is one of the agents used - to separate gold and platinum from osmium, ruthenium, iridium and rhodium, because only gold and platinum will dissolve in it. [1]

Ruthenium is used in hard disk drives, resistors and flat screen displays. It is also used as a plating material for making electrical contacts much more durable. [2] It is a good electrical conductor and has similar properties to rhodium in this regard but is less expensive. [1]

That leaves 14.3% for all the other uses combined.

Ruthenium is often added to platinum and palladium alloys as a hardening and strengthening agent - and jewelry or medical instruments made with these metals are much more durable. [4] An alternative to ruthenium in this regard is cerium.

Ruthenium is also added to titanium alloys - and just 0.1% ruthenium added to titanium makes it 100 times more resistant to corrosion. [3] It is used in some nickel-based "superalloys" with applications such as jet engine turbine blades. [1]

It's said that an alloy of ruthenium and molybdenum has superconductive properties.

Ruthenium is also being researched for use in dye-sensitized solar cells - a new type of low-cost thin-film solar cell. The interesting thing about this technology is that while not as efficient as other thin-film solar cells, it is highly competitive due to its lower cost and it is said that it could compete with fossil fuels and have great significance by 2020. [7]

Increased recycling of ruthenium - in particular from the electronics sector - has decreased the demand for primary ruthenium. [2] However, with such a wide range of possible uses - and many interesting current developments, it seems highly likely that new demand for ruthenium will surface.