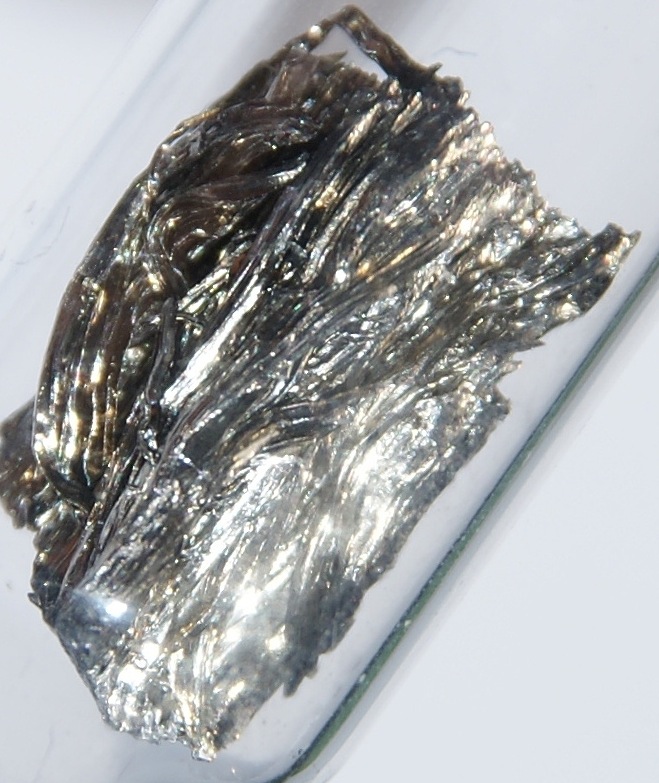 Samarium is an element in the lanthanide series. It is a silvery-colored metal with atomic number 62 and symbol Sm. Samarium is typical of lanthanides in that most of in its compounds it assumes the +3 oxidation state. A few Samarium (II) compounds are known however. [1]

The existence of samarium was noted in 1853 by Swiss scientist Jean Charles Galissard de Marignac, who observed its spectral absorption lines in a sample of didymium (a mixture of the elements praseodymium and neodymium). However it was not until 1879 that Paul Émile Lecoq de Boisbaudran, a French chemist, discovered samarium in the mineral samarskite. [1] [2]

Samarium is quite reactive. It ignites spontaneously in air at 150ºC and oxidises in air at room temperature. Naturally-occurring samarium is generally considered to be of low toxicity. [1]

Samarium is produced by the same multi-stage process that is used to isolate other rare earth elements, and is typically separated by ion exchange from monazite sands. [3] Global samarium production is around 700 tonnes, with global reserves estimated to be around 2 million tonnes. [4]

As with other rare earth elements, the general trend of uses for samarium is increasing as the world uses more advanced technology. One of the principal uses of samarium is in the manufacture of advanced modern magnets. Samarium-cobalt magnets have a high level of permanent magnetization and although this is not as high as that of the cheaper neodymium iron boron magnets, they are the most resistant to demagnetization and are much more temperature-stable than NIB magnets; being able to withstand temperatures of 700ºC as opposed to the 300-400ºC of neodymium magnets. Sm-Co magnets are however brittle and prone to physical damage. Samarium-cobalt magnets have a wide range of possible uses and can be found in headphones, motors, microphones, switches and musical instrument pickups. [1] [5]

153 Sm, a radioactive isotope, is a principal ingredient in the drug samarium lexidronam (aka Quadramet), which is used for cancer treatment. It has a half-life of 46.3 hours. [1]

149 Samarium is a good neutron absorber and so is used in the control rods of nuclear reactors. It has greater stability than some of the other materials available for this purpose such as boron or cadmium. [1] The 'Lindsay Mix' - a blend of samarium and gadolinium - is a byproduct of a neodymium processing technique and was widely employed for control rods. More recently, samarium-europium-gadolinium has been used. [2]

Samarium is sometimes found as a component in mischmetal, which finds use in lighter flints. However, samarium is not critical to mischmetal and it is often separated as this is more profitable. [6]

Samarium oxide is used as a dopant for calcium fluoride crystals by the laser industry. [2] It is also used in Neodymium:Yttrium Aluminium Garnet solid-state lasers to absorb stray emissions and improve efficiency. [7] Samarium oxide is also added to glass to absorb infrared radiation. [8]

Samarium is used as a catalyst in organic chemistry. It is employed in the dehydration and dehydrogenation of ethanol. [6]

Samarium titanate compounds are used as dielectric materials in certain capacitors and coatings. [6]

Samarium has been investigated as an alloying material for aluminium as an interconnection material for integrated circuit applications. [9]

Silver-samarium alloys have been investigated for use in dentistry. [11]