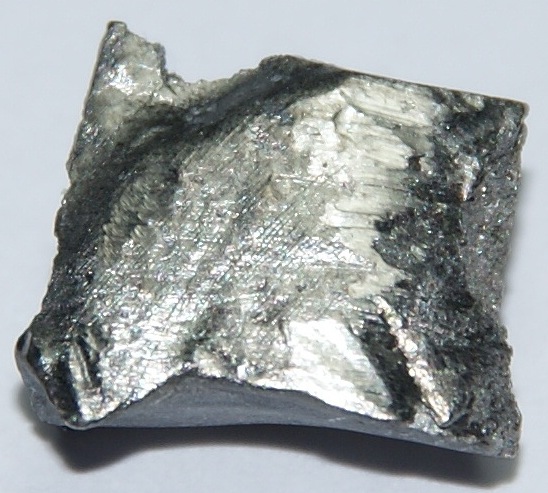 Terbium is a silvery-white colored metal. It is one of the rare earth elements, with atomic number 65 and symbol Tb. Terbium when pure is soft and can be cut with a knife. [1]

Terbium is quite stable in air but burns readily. It reacts slowly with cold water and rapidly with hot water, forming terbium hydroxide. Terbium also reacts with all halogens, and with many other elements when heated - such as carbon, sulphur, phosphorus, nitrogen and silicon. [1]

Naturally-occurring terbium is composed of one stable isotope ( 159 Tb). [1]

Terbium is one of four elements named after the Swedish village of Ytterby. The others are erbium, ytterbium and yttrium. The village has a quarry nearby, which is where gadolinite was first sourced. Gadolinite was the mineral in which the four elements mentioned above were discovered. The elements holmium, thulium and gadolinium were also all first discovered in minerals from the same quarry. [2]

Terbium was first discovered in 1843 by Carl Gustaf Mosander, a Swedish chemist - who detected it in yttrium oxide. Mosander separated yttria into three substances - yttria, terbia and erbia. There was apparently some confusion of nomenclature, and the names of terbia and erbia were switched. Terbium made up only around 1% of the original yttria mix. It was not until the 20th century and the advent of ion exchange extraction techniques that pure terbium was able to be produced. [1]

As is typical for rare earth elements, terbium is not found either pure or in high concentration in nature, but exists in small amounts in a number of minerals - including cerite, gadolinite, monazite, xenotime and euxenite. [1]

Terbium is separated from rare earth minerals during the complex, multi-stage process typically employed to separate the various elements. Treatment with ammonium nitrate leads to crystallization of terbium salts, then ion exchange processing is used to separate the terbium ions. [1]

Terbium is one of the rarest of the rare earth elements - yet there is still twice as much as there is silver in the earth's crust overall. However as mentioned above, it is mostly found in low concentrations. Terbium is expensive and global production is around 10 tonnes per year. [3]

Terbium has unusual optical properties, which have been studied in depth. By far the most significant use of terbium is the use of its oxide as a green phosphor. Terbium oxide phosphors fluoresce a brilliant yellow-green and are used in conjunction with europium blue phosphors and europium (III) red phosphors to create trichromatic lighting, which has a higher light output than incandescent lighting from the same amount of electrical power. [1] Terbium is used in fluorescent lamps, in the green emitter of projection televisions and in phosphorescent security inks such as those used in euro banknotes. [4] [5]

Some terbium compounds exhibit triboluminescence. This fascinating optical phenomenon is defined as the emission of light from a crystalline material when chemical bonds are broken (i.e. when it is fractured, crushed or pulled apart). This has possible application as part of early-warning systems designed to detect mechanical failure of critical structural materials such as aeroplane wings. [5] [6]

Terbium is one of the elements used in the alloy Terfenol-D, which has the unusual quality of being magnetostrictive. This means it changes shape when exposed to magnetic fields - and the material is used in sonar systems and other sensors and transducers. [1] Terfenol-D, which also contains dysprosium and iron, is used in sonar devices, sensors and in an interesting device called the Soundbug, a resonator that converts electrical signals into mechanical energy. The soundbug is attached to a resonant flat surface, turning it into a loudspeaker. [7]

Terbium is used together with iron and cobalt in alloys used for magneto-optical recording films. [4]

Terbium is used as a dopant for calcium tungstate, calcium fluoride and strontium molybdate in solid-state device materials. [8] It is also used together with zirconium(IV) oxide as a crystal stabilizer of high temperature fuel cells. [1]

Sodium terbium borate is used as a laser material.