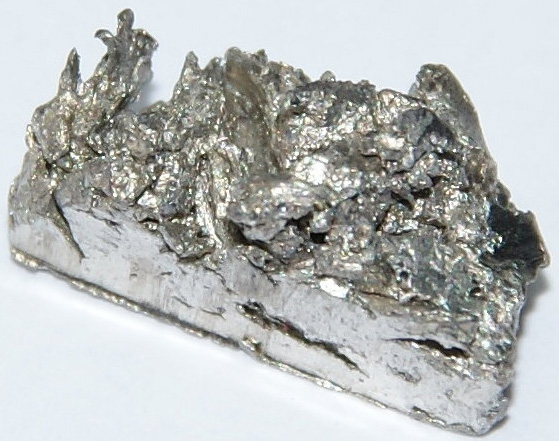 Ytterbium is considered to have been first discovered in 1878 by Jean Charles Galissard de Marignac, a Swiss scientist. It was found in the mineral gadolinite. However gadolinite also contains several other elements, including other "rare earth elements" - and this was a cause of consternation (and nomenclature frustration) for scientists of the 19th century, as the technology did not exist to separate the elements completely from each other.

Gadolinite, which had been found in a quarry near the town of Ytterby (near Stockholm, Sweden) had been separated into three components in 1843 by Swedish chemist Carl Gustaf Mosander. He named these three components yttria, terbia and erbia. Erbia was separated by Marignac into two components, one of which contained the element which he named ytterbium [2] - but it was not until 1953 that the properties of ytterbium were able to be ascertained, when relatively pure ytterbium was first produced by ion-exchange processes. More recently, solvent extraction has also assisted extraction. [1]

Although being a "rare earth element", ytterbium is the 43rd most common element on earth, being more abundant than uranium or tin - and is found in the minerals monazite, euxenite and xenotime. It is most commonly produced industrially nowadays from the mineral monazite using ion exchange. It is sourced in several countries including China, United States, Brazil, India, Sri Lanka and Australia [1] [2] . With a diverse supply base it would seem that the supply chain of ytterbium is likely to be relatively stable; however production is small, only around 50 tonnes per year.

It is often said, particularly by older sources, that ytterbium has very few industrial / commercial uses. As global ytterbium production is only around 50 tonnes per year, it can be seen that demand for the element is much smaller than many other metals. However ytterbium does have a growing number of applications including some very interesting, unusual ones - and with advances in technology, more are likely to be discovered.

Ytterbium also has a number of uses in laser technology. Its trivalent ion Yb3+ is used as a laser-active dopant and ytterbium finds its way into some high-power lasers and wavelength-tunable solid-state lasers. [5] Ytterbium fiber lasers have been described as perfect for laser cutting, for which they have good characteristics for important parameters such as operating wavelength, power, beam quality and spot size. Such lasers are used for several applications such as cutting silicon wafers for solar panels, detailed cutting of thin materials, cutting alloys for aerospace, cutting of thick steel plates, welding, marking and drilling. [6] Ytterbium in these applications could probably be described as having ideal characteristics, but there are likely to be alternative possibilities.

169 Yb emits gamma radiation, and it has been used in small amounts in portable X-ray machines. [3]

It has been stated that 174 Yb has the potential for use in atomic clocks, as it may be even more accurate than the caesium atomic clock. However, the caesium clock is accurate to 1 second in a million years - and except for experimental purposes, it would seem that this is accurate enough! [3]

Ytterbium is also being researched for use in special high security ink, for uses such as in banknotes. Together with erbium it can create a special infra-red signature which could be detected with an infra-red laser.[3]

Ytterbium (III) chloride has several possible uses, including in a possible rapid test for tuberculosis, and tracking digestion in animals.[7]

Ytterbium nitrate has uses in fiber optic technologies and is a colorant in glasses and porcelain glazes.[8]

Certain ytterbium compounds are luminescent, but give out light at 980nm, near infra-red, and are being researched for their use in biological imaging as light of this wavelength travels further through body tissues than other wavelengths of visible light.[3]