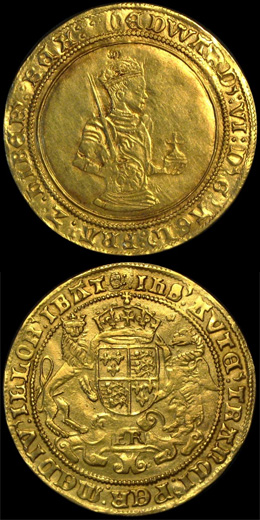 Here is a list of the double and treble sovereigns known to exist from the 15th and 16th centuries:

Unique examples of piedfort (literally "heavy foot") sovereigns of Henry VII have been found at double and triple thickness, (S.2177) using the same dies as the regular variety. (S.2176) It is thought that these were experimental or VIP presentation pieces and not intended for circulation. [1] [2] These coins have a catalogue valuation of between £52,500 and £185,000 depending on grade.

During Henry VIII's reign, a few double sovereigns were minted. These were "probably patterns" according to Keynon [3] who describes them in great detail. These coins do not always appear in general coin catalogues:

A pattern double sovereign from the second coinage of Henry VIII: Bought by the British Museum, this coin weighs 470.1 grains and is exactly like that of the first issue, but with obverse mintmark lis and reverse MM pheon and "four saltires" after the word IBAT in the legend. Thought to be unique and to have been struck not long after 1526. [1]

Edward VI, in his "second period" coinage, 1549-1550, struck a treble sovereign. This is thought to be a pattern, presumably existing in only one example, which is described by Keynon (p.108-109). This coin, weighing 508 4 /17 grains, and at a fineness of 22 carat, differed from the previous coins in that the King holds a sword and is not wearing the "Royal robes".

There is also mention of a double sovereign of the Edward VI third coinage. Two examples were known to Keynon - one weighing 475 grains and the other at 504 grains. The coin was valued at 48 shillings and the weight was intended at 480 grains, one troy ounce. [3]

The triple Unite of Charles I was valued at sixty shillings, so in one sense could be seen as a treble sovereign. This coin is given its own page - triple unite.

The next time the double sovereign appears is in 1823, in the reign of George IV. Some coin catalogues list these coins (1823 onwards) as "two pounds" rather than "double sovereign". However these coins generally featured the same reverse design as the sovereign - Pistrucci's George and Dragon - and were minted at double the weight of the "ordinary" sovereign. On this website we will refer to these coins as double sovereigns, up to the time of the release of the two pound piece in 1980. The two pound coin has its own page - Two Pound Coin.

This coin appears in 1823 - after the Great Recoinage of 1816 and thus is "milled", rather than hammered; made by machinery with far greater precision than the old hammered coins. This coin was exactly twice the weight of the gold sovereign and was similarly struck in gold. The coin was known as a double sovereign in its day and this is clearly appropriate - the coins bear the same famous reverse design; Pistrucci's George and Dragon.

William IV produced a proof-only version of the double sovereign / gold two pound coin dated 1831. This coin has a plain edge and inverse die axis. The reverse design is a shield and mantle with crown above, with the words "ANNO 1831".

The double sovereign was not produced again until 1887, when it appeared with the Victoria "Jubilee Head". It is reported that there are a large number of forgeries of this coin, and that although some are of poor quality and easily detected by the experienced numismatist from the manner in which the coins wear, some of the forgeries are very competent and difficult to detect. Anything that looks "too new" is potentially suspect. [2] (p.432)

In addition there is an 1887 proof version (including an extremely rare variation with no "B.P." designer's initials on the reverse. A further version of this coin with the "S" mintmark (for Sydney, Australia), is listed as extremely rare, with a value in five figures - however these coins also have been a victim of recent forgery.

Edward VII issued a 1902 double sovereign, in 'ordinary', proof and "Sydney mint" versions ("S" mintmark above center of date on reverse.) Again, very competent forgeries of this coin are known to exist. [1]

George V issued a 1911 double sovereign. Only proof versions of this coin exist, and most of them remain in the "sets" in which they were issued together with other proof coins of that year. Again, forgeries are known and heavily scuffed coins are suspect. [1]

An Edward VIII double sovereign is known. This is considered a pattern, and as he abdicated the coin was never released. The coin is extremely rare and listed by Coincraft with a value of £70,000. [1]

A 1953 gold proof was created, however these were not released to the public and the few specimens that exist are extremely valuable - listed in Coincraft as £75,000. The next gold proof two pound coin was released in 1980; these coins, and those subsequent, are described here - Two Pound Coin.

[1] Coincraft's Standard Catalogue of English and UK coins
[2] Spink - Coins of England and the United Kingdom
[3] Keynon - The Gold Coins Of England, p.112