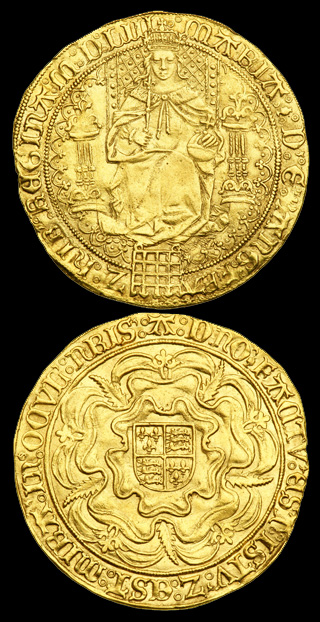 The fine sovereign was a thirty shilling gold coin (as distinct from the "ordinary" twenty shilling sovereign) which was issued by some English monarchs in the 16th century. Fine sovereigns are striking coins - large, rare and valuable nowadays and must have been a powerful commodity in their day.

In the "Third period" coinage, 1550-1553, Edward VI issued the first fine sovereigns, (S.2446) valued at thirty shillings according to modern catalogues; however Keynon's classic reference "The Gold Coins of England" from 1884 has the value of the fine sovereign listed as 24 shillings.

The design of the fine sovereign was perhaps inspired by the large, high quality 200 grain, 23 carat sovereigns of Henry VIII's first coinage - which also had depicted the King enthroned on the obverse and Royal Arms over a Tudor rose on the reverse. The coin features Edward enthroned on the obverse, with portcullis below him and the inscription EDWARD VI D G ANGLIE FRANCIE Z HIBERNIE ("Edward VI, by the grace of God, King of England, France and Ireland.") [1]

The reverse of the coin features a large Tudor Rose, with royal arms over it and the Legend "IHESUS AUTEM TRANSIENS PER MEDIUM ILLORUM IBAT ("But Jesus passing through their midst went His way.") [1]

A double sovereign was also made from the same dies as the Edward VI fine sovereign, using a flan of double thickness. (S.2447) Only two examples of this coin are thought to exist. The coin was made at double thickness as a piedfort and was probably either a pattern or a presentation piece. Its catalogue value is listed as £175,000 in VF condition. [2]

Mary issued a fine sovereign (S.2488), valued at thirty shillings - and this coin, like all her gold coins, was struck at .995 fineness - very high quality indeed. [2] Mary's fine sovereign exists in three "obverse Latin date" varieties; with the date above the Queen's right shoulder being MDLIII (1553), MDLIIII (1554), or no date appearing. The 1554 is rarer than the much 1553. There is a possibility of either of two mintmarks - with either a pomegranate or halved rose MM appearing; the same on both sides of the coin. The reverse legend on the coin reads DNO FACTU EST ISTUD Z EST MIRA IN OCUL NRIS - ("This is the Lord's doing and it is marvellous in our eyes.") [1]

No fine sovereign was issued by Philip and Mary (1554-1558), however the tradition of the 30 shilling fine sovereign was picked up again by Elizabeth I. Elizabeth's fine sovereign appears in two main varieties, the 1559-1578 variety, with the tressure pattern broken by the back of the throne (mintmark either lis or cross crosslet), and the 1583-1600 "sixth issue" (Spink - Coincraft has it as the fifth issue) variety, with the throne set lower and the tressure pattern "not normally" broken by the back of the throne (mintmarks "A", escallop, crescent, hand or tun). [2]

In his second coinage (1604-1619), James I minted a 30 shilling gold coin very similar indeed in appearance to the previous fine sovereigns. It was essentially the same coin, however it came to be known as the Rose-Ryal in recognition of the obverse design of the King in his Royal Robes, and the reverse design of the Rose. [2]