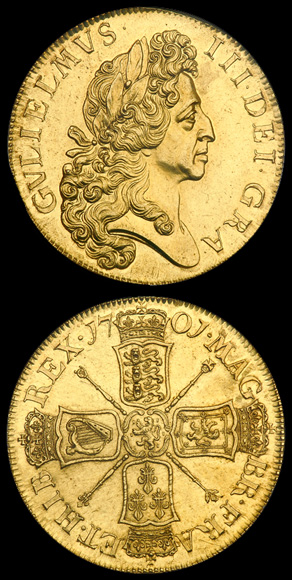 The five guinea coin is a denomination that first started in the reign of Charles II and continued into be issued until 1753. The guinea coins were superseded by sovereigns in the Great Recoinage of 1816.

In general, five guinea coins were not produced in great quantity compared to the guinea and half guinea - however those that were in circulation saw much use. In general, worn or damaged examples are more common, specimens in high grade significantly more valuable.

The first five guinea coin was that of Charles II, and it was initially valued at 100 shillings. Although most people think of the value of the gold guinea as 21 shillings, the guinea was at first worth 20 shillings; being a continuation of the sovereign / unite / broad and other 20 shilling coins of previous times. The name "guinea" was in a sense a nickname, a recognition of the fact that the gold used to make the coins was imported from Guinea, Africa. Fluctuation in the gold price, together with clipping of the nation's silver coins caused the face value of the guinea to be changed several times throughout the life of the coin.

The series of gold guinea coins of Charles II were milled, as opposed to hammered, and the machining process for creating the coins had recently been developed. With a diameter of 37 mm and a weight of 41-42 grams (around 650 grains troy) the five guinea piece was an impressive coin by any standards and would have had tremendous purchasing power in its day. The Obverse featured Charles' portrait with the words CAROLUS II DEI GRATIA ("Charles II by God's Grace"); the reverse featured the cruciform shields, sceptres in angles design that has been seen on other coins since then - for example the silver florins of George V issued from 1911-1920. The five guinea coins featured edge lettering instead of milled edges - with the words "DECUS ET TUTAMEN" and "ANNO REGNI _______" with the regnal year, calculated from the day of the death of Charles I. So for example, coins from 30 Jan 1669 - 30 Jan 1670 read "ANNO REGNI VICESIMO PRIMO".

With the exception of the extremely rare 1677/5 coin with "NONO" ("ninth") edge lettering, all these coins are obtainable, collectable examples generally listing for four figure sums.