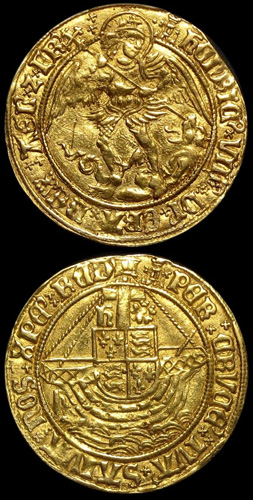 The Gold Angel was an English hammered coin first struck in the "first" reign of Edward IV (1461-1470). Gold Angels were minted from 1465 through to 1643 and form a striking series of coins that is both intriguing for the enthusiast and challenging for the collector - with numerous rare varieties, high value coins and fascinating historical anecdotes.

From the 1430's to the 1460's, rising precious metal prices and a short supply of gold across much of Europe meant that the Gold Noble was worth considerably more in continental Europe than its face value in England (six shillings and eight pence) - and the coins were being exported on the black market, resulting in a great shortage. Similarly, the English silver coins were being exported, melted down and sold en masse for profit. [1]

In order to put a stop to this, decisive measures were required: On 13th August, 1464 King Edward IV (1461-1470, 1471-1483) ordered by indenture a reduction in weight of the silver coinage and a raising in value of the gold coinage. Mintage of the old gold noble was halted. Edward raised the value of the nobles still in circulation to eight shillings and fourpence in order to keep the coins' value competitive with the price of gold and attract old nobles back to the exchanges. The strategy didn't work and so Edward raised the buying price of nobles again, to eight shillings, six and a half pence. The coins flooded in - the London exchange bought 137,875 of the old coins in a year. [2] Edward reduced the size of silver coins by 20% in 1464, resulting in the "light coinage".

A new coin, the gold ryal (also known as the rose noble as it featured a large Tudor Rose on the reverse) was introduced in 1465 with a value of ten shillings. However this coin proved unpopular (perhaps due to the high denomination - the highest yet seen in England) and production was ceased in 1470. (The ryal was reintroduced briefly in 1487 and then again with greater success in 1553.) [1]

A further variety of 958 fine gold coin was introduced in 1465 [3] in order to 'fill the gap' between denominations: The Gold Angel. Its weight was 80 grains [4] and its value was six shillings and eight pence - equivalent to a third of a pound or eighty pence in total; equivalent to the original face value of the earlier Gold Noble coin of 108 grains. It was at first called the "Noble Angel" on account of its depiction of Archangel Michael on the obverse, however the name was soon shortened to "Angel". Unlike the Rose Noble however, the Angel became a very popular coin.

It appears that the English again took inspiration from France for this coin - as a gold coin by the name of Angelot had been issued there in 1340. 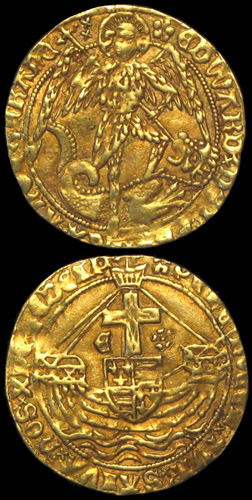 The "face value" of the Gold Angel did not always stay the same, with various factors playing a part; including debasement of the silver coinage, fluctuation in the gold price and the extravagant spending of Henry VIII. The export of English coin also appears to have been an ongoing problem. During the second coinage of Henry VIII (1526), the value of the Angel was raised to seven shillings and sixpence, and then in 1544 to eight shillings. In 1550, during the reign of Edward VI (1547-1553) it was raised again to ten shillings, its value being inflated due to debasement of silver denominations. In 1612 the coin's value was raised to eleven shillings by James 1st, in order to keep its value in line with a rising gold price. Finally, with James I's third coinage, the value of the coin was returned in 1619 to ten shillings - and there it remained. [1][5]

Despite the fluctuations in face value, it appears that the fine quality 23-carat gold of the Angel may have become a standard for gold quality, at least for a while - as the nickname "Angel Gold" arose for 23 carat Gold. [6]

In 1471, the Half Angel, also known as the angelet or angelett, was introduced. It featured a similar design, a weight of 40 grains and a diameter of 20-21mm. [5] It initially had a value of three shillings and four pence but this value fluctuated, as with the angel. The half angel was produced until 1619. [1]

It is common to find the gold Angel coins, particularly those of James I and Charles I, with a small hole bored through them (or with the hole 'plugged'). Although other old coins are sometimes found pierced, having been worn as jewellery, the frequency with which this was done to the gold Angel is testament to a curious tradition; that of the touch piece.

It had long been believed in England and France that monarchs had a "God-given" power to heal by touch a particular form of Tuberculosis called Scrofula, also known as King's (or Queen's) Evil or Morbius Regius.

In a tradition with roots going back to ancient Rome, Kings and Queens performed a special ceremony, giving coins bearing the image of "The Devil Defeated" to the sick. The monarch hung the perforated coins around the necks of sufferers personally, and having touched the coin (or in some cases laid hands on the sufferer) it was thought that through talismanic action, the healing power of the King could be transferred to the recipient, who was instructed to continue to wear the coin, being cured if they had enough faith.

The tradition is recorded in William of Malmesbury's Chronicle of the Kings of England (1120). The scrofula disease was seldom fatal and is now held to be given to spontaneous cure or remission - nonetheless in old times belief in its power was strong: King Henry IV of France is reported to have touched and healed as many as 1,500 individuals at one time!

The Angel coin became the preferred coin for such ceremonies because it featured an image of the Archangel Michael slaying Satan in the form of a Wyvern (dragon). Charles I issued Angels almost exclusively for use as touch pieces and Charles I Angels without a hole are uncommon. [8]

The first French "Angel" was l'Ange (or Angelot), struck by Philip VI in 1340. There is also record of mention in royal ordinances of a Demi-Ange (Half Angel) but this coin has never been found. [9] At this time it appears that a Silver Angelot was also minted. [10]

Centuries later, from 1871 - 1898, France minted an Angel gold coin at 900 fine - and this also had a mystical reputation for giving fortune to the bearer. One version of the legend has it that the designer of the original coin, Augustine Dupré, faced a death sentence - and as he prayed to be spared he held a gold Angel. The coin caught the eye of the guard, and with the coin Dupré bought his freedom from the guillotine. [11]