Gold Coins of the Black Prince

Although not technically English coins, the coins issued by the Black Prince were examples of Anglo-Gallic coins - minted by English Kings and Princes in their French Possessions. Numerous issues of these coins were made by English leaders from the time of Henry II (1154-1189) to Henry VI (1422-61). This page focuses on the five gold coin types issued by Edward the "Black Prince" (1330-1376).

Edward of Woodstock, now commonly known as the "Black Prince", was the eldest son of King Edward III of England. He lived from 1330 to 1376 and was invested as Prince of Wales in 1343. He died one year before his father. Had he outlived his father, he would have become King of England.

The Black Prince served as the King's representative in Aquitaine, where he held court with his wife Joan "The Fair Maid of Kent", who was, controversially, also his cousin. [1] Joan was described by a French chronicler as "The most beautiful woman in all the realm of England, and the most loving." [2]

The Black Prince turned out to be an exceptional military leader: By way of example, in 1367 he struck a deal to provide military aid to Peter of Castile, whose throne had been usurped. Their combined forces, together with those of a few other noblemen, defeated a Franco-Castilian army of more than double their numbers (24,000 to 60,000), with the English longbowmen dominating the battlefield.

However, the main objective of the Black Prince's mission was to support Edward III's claim to the French throne.

The Black Prince was authorized to mint coins and no doubt these would have been used to pay his soldiers and other subjects. Turning to Pinkerton's classic 1784 text on medals, [3] (p.134,161 and 181) we find this account of his coins:

(p.161) - "There were two kinds of Black-money, the counterfeit intended by forgers to pass for silver; and the authorised money of billon. Black-money, or billon, was struck in the mints of the English dominions in France, by command of the kings of England, for the use of their French subjects; but black-money and copper money are very different. Money of billon was common in all France from about the year 1200. Hardies [a silver "penny" coin of 19mm diameter], being authorised black-money, of Edward the Black Prince, are likewise found."

(p.181) - "Gold coins, which Edward the Black Prince struck in France, were, in like manner, termed Leopards, from that animal, part of the then English arms, being on the reverse."

Several types of coin were issued in France by the Black Prince - among them five different gold coins. These in general resemble in appearance the first gold florins of Edward III. All of these coins are extremely rare, with very few known examples of each. The five gold coins of the Black Prince are listed below.

On the gold chaise, the Black Prince appears on the obverse sitting in a Gothic chair, or throne, with a scepter in his right hand. On the reverse is a cross within a compartment of four roses and four angles. It has two lions ("leopards") and two fleurs de-lis in the quarters. [4] On the obverse is inscribed "ED PO GNS REGIS ANGLIE PNS AQUITANIE" ("Eduardus Primo Genitus Regis Angliae Princeps Aquitaniae" - "Edward first born to the King of England Prince of Aquitaine".) On the reverse - "DEUS JUDEX JUSTUS FORTIS PACIENS" - "God the just, powerful,patient judge." [5] From this inscription De Boze calls it a Juste, or Fort.

This coin weighed 54 grains Troy and was made at .995 "fine gold". A few examples are known - John Laskey mentions one in 1813 as residing in the Hunterian Museum, Glasgow - though he thinks this coin unique. [6] Snelling (1762) however mentions five - one in the King of France's cabinet; one of Mr. Hollis, formerly of Thomas Grainger, both weighing 54 grains; one of Sir Charles's; one in the Duke of Devonshire's collection and one in that of the Earl of Pembroke. [4]

The Black Prince was not the only one to mint such a coin: Other 14th century gold chaise coins are mentioned as coming from Belgium, under the reign of Louis de Male (1346-1384). 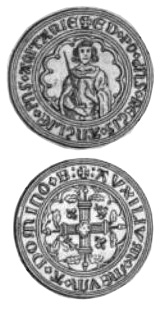 Gold Hardy
of the Black Prince

On the hardy, the Black Prince is in his robes to his waist, with his sword in his right hand, within a compartment. On the reverse is a cross with the lions and fleurs-de-lis. It is inscribed on the obverse as the last, with the Prince's name and title; but on the reverse, AUXILIUM MEUM A DOMINO B. [4] That in the King of France's cabinet weighs 75 French grains, or about 61 grains Troy; the Duke of Devonshire's 60, or that of the half noble. Hautin, p. cxxxiii. has one a little different, he being crowned. His robes are open so as to show his armour, and it has only AQT instead of AQUITANIE. [4] This coin also was minted at 995 fine gold. [5]

Snelling (1762) lists two known examples of these coins - one in De Boze and one belonging to the Duke of Devonshire. [4] 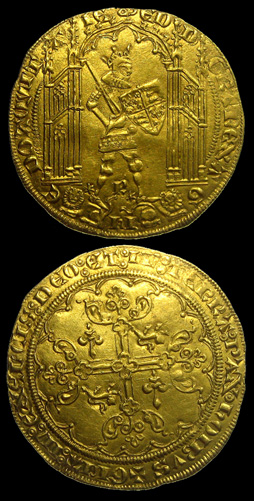 Gold Guiennois
of the Black Prince

The gold guiennois is described by [4] as being exactly like that of his father. On the obverse, the Black Prince stands under a gothic pavillon / portico / canopy (a known French style), fully armed, with sword raised and shield decorated with the arms of England and France. On the reverse, a foliate cross. The inscriptions are in elegant Lombardic lettering - on the obverse ED P GNS REGIS ANGLIE PINCPS AQUITANIE; and on the reverse, GLIA IN EXCELSIS DEO ET IN TER PAX HOMINIB - ("Glory to God in the highest and on Earth, peace among men.") [4] [5]

This is a striking, unusual coin. Snelling (1762) lists two known examples - one in De Boze and one belonging to Sir Charles. [4] More have evidently been discovered - four of these coins are now presented by the Fitzwilliam Museum, Cambridge. [7] 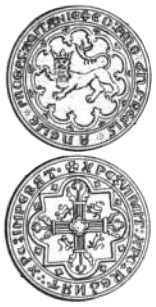 Gold Leopard
of the Black Prince

The gold leopard of Edward the Black Prince, also, is like that of his father. On the obverse, a lion or leopard, passant-guardant; crowned and within a compartment of arabesques, and the legend ED PMO GNS REGIS ANGLIE PNCEPS AQUITANIE. On the reverse a cross, whose ends terminate in acorns with leaves, within a rose or compartment of four arches and four angles. The reverse legend is the same as his father's - XPC VINCIT XPC REGNAT XPE IMPERAT. ("Christ conquers, Christ reigns, Christ commands.") [4] [5]

Snelling (1762) lists two known examples - one in De Boze and one belonging to Sir Charles. [4] 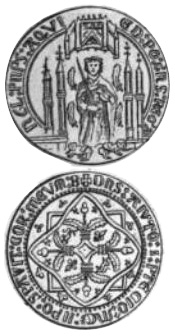 Gold Pavillon
of the Black Prince

The pavillon depicts Edward the Black Prince standing in his robes under a spacious portico or pavillon, with his sword erect as usual, and has two ostrich feathers on each side of him. The obverse inscription reads as that of the Chaise - ED PO GNS REG ANGL PNPS AQUI; short for "Eduardus Primo Genitus Regis Angliae Princeps Aquitaniae" ("Edward first born to the King of England Prince of Aquitaine".)

On the reverse is a cross formed of leaved acorns, inclosed within a sort of curved lozenge, out of the middle of the four sides of which issue the four angles of a square. The reverse legend reads DNS AIUTO PTECO ME IIPO SPAVIT COR MEUM B; that is, Dominus adjutor protector meus, in eo speravit cor meum - "The Lord is my helper and protector, in him I have prostrated my heart." [4] [5]

A spectacular example of the gold pavillon is found in the British Museum. [8] Snelling (1762) mentions five: One in the King's cabinet, formerly Dr. Andrew Gifford's; that of the Duke of Devonshire, weighing 69 gr. Troy; one in the Pembroke collection; one in De Boze [presumably the Cabinet des médailles et antiques, of which Claude Gros de Boze was curator from 1719-1753 [9] , or a personal collection?], named by him a Double, about 73 gr. Troy; and that of Thomas Knight, Esq; of Godmersham, near Canterbury, formerly possessed by Bryan Fairfax, Esq; 83 gr. Troy.

Snelling (1762) notes how the weights of these coins differ far than any of the Aquitanian gold coins. [4]