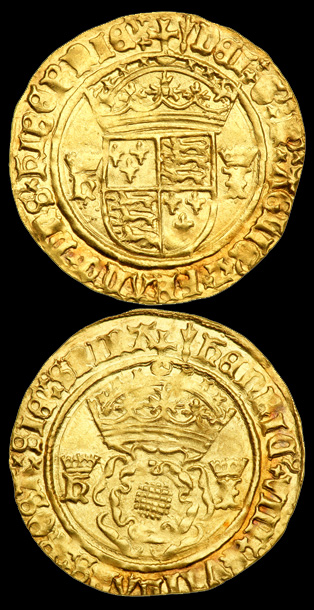 Although many people think of the English crown coins as being minted only in silver, the first crowns were made of gold. The first gold crown was introduced in the Second Coinage of King Henry VIII - from 1526 to 1544.

Crown Of The Rose

The first crown coin was called the Crown of the Rose. It was made from 23 carat gold and valued at four shillings and sixpence. However this coin was short lived. Two varieties are listed in coin catalogues; one with the reverse legend DNS HIB [short for "Dominus Hibernia"] RUTILANS ROSA SINE SPINA ("Lord of Ireland a dazzling rose without a thorn"); the other with HENRIC RUTILANS ROSA SINE SPINA of the reverse legend ("Henry a dazzling rose without a thorn"). Both of these coin types are very rare and valuable now. [1]

Crown Of The Double Rose

Henry's next gold crown, the crown of the double rose (see image left), was valued at five shillings - and this has remained the face value of the crown ever since (with the exception of the commemorative "crowns" issued from 1990 onwards which have a face value of five pounds).

The crown of the double rose was minted at 22 carat - and unlike some of Henry's controversial silver coins, the gold crowns were never debased. Numerous varieties appeared: As is well known Henry remarried several times, with one of the results being that the "HK" on the first coin, short for "Henry Katherine" needed to be amended several times! A half crown was also issued and these coins were successful, being continued with the Third Coinage (1544-1547) and Posthumous Coinage (struck from 1547-51 during the reign of Edward VI yet with Henry's name and portrait). [2]

Edward VI (1547-1553) continued to mint gold crowns together with half crowns, and also introduced a silver crown. None of the gold crowns of Edward VI is common - and the first issue is thought to be unique.

Mary and Philip did not mint crowns, however both silver and gold crowns and half crowns were re-introduced by Elizabeth I. None of the gold crowns of Elizabeth are common and of the first of the three issues, only two examples are known to exist.

Gold and silver crowns were subsequently minted by James I, Charles I and during the Commonwealth period.

The gold crown minted during the second coinage of James I came to be known as the "Britain Crown." This was because the words MAG BRIT ("Master of Britain") appeared on the coins for the first time. The crowns of James's third issue were also known as quarter laurels, a laurel being a twenty shilling gold coin of the same period. 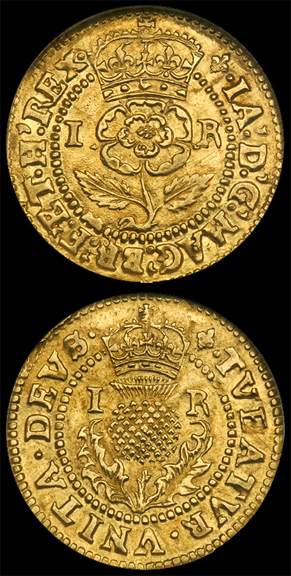 James also introduced the thistle crown (see image left) - a smaller gold coin valued at four shillings, however this coin was not continued by later monarchs. [1] The Thistle crown featured a rose and crown on the obverse, and thistle-and-crown on the reverse. The letters IR (standing for 'IACOBUS REX')appear on either one or both sides of some coins, and not on others.

James I, Charles I and the Commonwealth also produced double crowns, valued at 10 shillings.

From the time of Charles II onwards, regular-issue crowns were minted in silver - however there have been occasional gold proof crowns or pattern crowns created as presentation pieces. In general these coins are spectacularly rare and valuable; worth high five figure 5 or even 6 figure sums in some cases. Dates include:

Since 1990, commemorative gold proof "crowns" with a face value of five pounds sterling have been issued by the Royal Mint. These coins, issued as limited edition collector's pieces, have been referred to as "five pound crowns" in order to distinguish them from "quintuple sovereigns." The five pound crowns have a diameter of 38.61mm, a weight of 39.94 grams and a fineness of 916.6 (22 carat). [3] See Five Pound Coin for a full list.