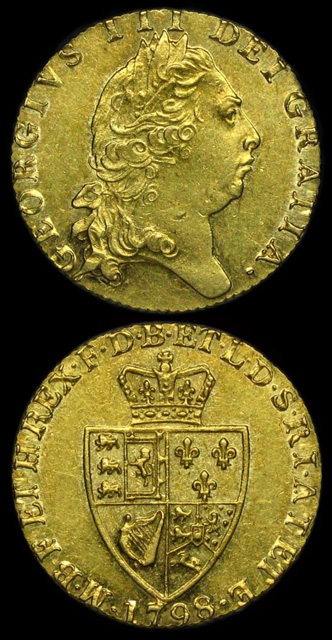 The first gold guinea was issued under the reign of King Charles II on February 6th, 1663. The guinea was at first valued at twenty shillings and four denominations were issued: A five guinea coin (100 shillings), two guineas (40 shillings), one guinea and half guinea (10 shillings). However as the price of gold was rising, attempts were made to keep its value in line. First the weight of the coin was reduced in 1670, then in the 1680's, the value was increased to 22 shillings. [1]

The new coins of 1663 were also the first to use the new machines made by Blondeau which finally rendered the ancient hammering method of coin manufacture obsolete. The new coins had a more uniform, precision made quality and the larger coins featured 'edge lettering', with the legend "DECUS ET TUTAMEN" - "a decoration and a safeguard"- appearing on the edge, together with the "regnal year" in Latin. The inclusion of the word "safeguard" was a reference to the fact that the edge lettering would immediately reveal any illegal clipping or shaving of the coins done in order to collect gold. There was also no "inner circle" on these coins. The guinea had a diameter of one inch (25 mm).

The guinea was effectively a continuation of the tradition of a "sovereign-type" gold coin valued at twenty shillings; like the broad, unite and sovereign of previous times. "Guinea" was not the official name of the coin; the coins came to be named guineas because the gold used in them was imported from Guinea in Africa.

The 1663 guineas had a diameter of one inch (25 mm) and were made from "crown gold" (at approx 22 carat), each weighing 129.4 grains. Some of the gold coins have an elephant under the bust, and after 1675 the elephant had a castle above. This symbol was used to denote that the metal used was imported by the Africa Company. [3]

By the reign of William and Mary (1689-1694), the old hammered silver coinage was in general so badly clipped that the guinea, nominally rated at 20 shillings, was commonly traded at 30 shillings. Now through the renewal of an act passed by Charles II, any person could bring bullion to the tower mint and have it coined, without any charge whatsoever. This created a problem for the mint: As 30 shillings of silver could be obtained for a guinea, this was causing a black market trade cycle - silver being exported to buy more gold. Thus in 1695, 700,411 guineas were coined for private persons, in addition to the 21,389 for the Africa Company.

In 1695, a proclamation declared that coins "clipped within the ring" were no longer legal tender. It was also declared that in no transaction should the guinea be valued above 28 shillings; then 26, then on April 10th 1696, no higher than 22. In 1695 it was also enacted that from March 2nd, 1695 to January 1st, 1696, no guineas were to be imported and the mint should only be obliged to coin bullion brought by the Royal African company.[3] (p.179)

Finally, all hammered silver was called in and declared that from December 1st, 1696 it was no longer legal tender. Thus, to the lament of modern collectors, most of the old silver coin was melted down.

The price of the guinea then fell back to "reasonable" levels.

The guinea continued to be made throughout the eighteenth century, varying slightly in size and weight and large numbers were made throughout the 18th century. In 1774, almost 20 million of the old gold guineas of William III and Queen Anne were called in and remanufactured as new guineas. Towards the end of the century, gold became scarce. Good quality coins were being either used to finance military operations or exported. Many fraudulent base coins were in circulation at this time. In 1799 the manufacture of the coins was halted although half and third guineas continued to be made.

One last run of guineas was made - in 1813. This was created in order to pay the Duke of Wellington's army in the Pyrenees. 80,000 coins were made, using a new design and this was known as the military guinea. Gold was scarce and these coins traded at twenty-seven shillings.

After the Great Recoinage of 1816, no further guineas were issued, the sovereign of 20 shillings again being adopted. However the guinea has continued as a "denomination without a coin" ever since; its value remaining at 21 shillings until the present time (now being a pound and five new pence) - although no guineas are issued these days.

Due to the 'aristocratic' associations of the name, a tradition of pricing of luxury items, horses and other high ticket items in guineas continued until the late 20th century and is still found in a few instances, for example livestock auctions. [4] Some horse races are still named after the guinea, such as the "One Thousand Guineas" - a name used to denote the prize money of the race.