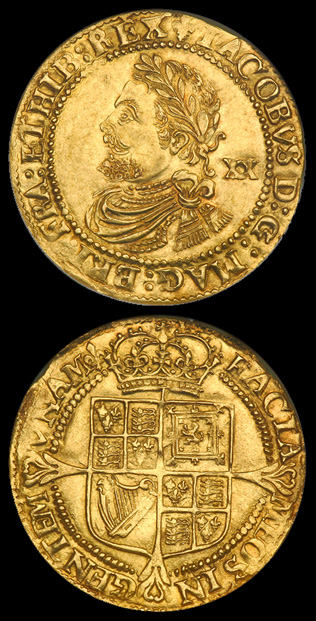 The gold laurel was a coin first issued by King James I and was the third English gold coin with a face value of twenty shillings which had been produced during his reign (the others being the sovereign and the unite.) [1]

The value of the unite had been raised to 22 shillings in 1612 to keep the coin in line with rising European gold prices. The laurel that replaced it in 1619 was a lighter coin but similar in many regards: Being valued at twenty shillings (ie. one pound), the laurel was again effectively another variety of sovereign, but named due to its depiction of the King wearing a laurel wreath instead of a crown. It still bore the "unite" legend "FACIAM EOS IN GENTEM UNAM" ("I will unite them in one nation") which is a reference both to his wish to unite the English and Scottish nations and to Ezekiel 37:2. [2]

Several slightly different varieties of gold laurel were made by James I. All were made at the Tower Mint [1] however five different busts were used. [3]

The obverse legend of the laurel reads IACOBUS D G MA BRI FRA ET HI REX (this is short for "IACOBUS DEI GRATIA MAGNAE BRITANNIAE FRANCIAE ET HIBERNIAE REX" "James, by the grace of God, King of Great Britain France and Ireland." Minor variations in the obverse legend exist, also a few variations in mintmark. [1] Each coin bears its value (in shillings) in Roman numerals on the obverse - the laurel 'XX", the half laurel "X" and the quarter laurel "V".

The reverse of the coin features a long cross over a shield with the arms of England, France, Scotland and Ireland, with crown above. The unite legend mentioned above encircles the design.

With the reign of King Charles I, commencing in 1625, the king's portrait on the gold coinage returned to featuring a crowned King. Gold "unites" were produced under Charles I, the commonwealth period and Charles II, and these were replaced by the gold Guinea in 1663. [4]

The gold laurel is said to be both scarcer than the unite and less popular with collectors, this being attributed to an inferior design. [3]