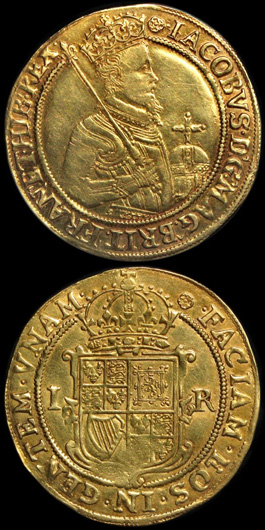 The gold unite was a coin of the seventeenth century, issued by James I, Charles I, Cromwell and Charles II. The unite superseded the gold sovereign - a successful denomination which had been struck until 1604, in the reign of James I.

The unite was essentially another sovereign - a similar twenty-shilling gold coin - but it followed the common tradition of an English coin acquiring a name based on some notable feature of the design. The unite acquired its name because it stated the King's intention to unite England and Scotland; featuring the inscription "IACOBUS D G MA BRI FRA ET HI REX" ("James, by the grace of God, King of Great Britain, France and Ireland") on the obverse and "FACIAM EOS IN GENTEM UNAM" ("I will make them one nation") on the reverse.

The value of the unite was raised to 22 shillings in 1612, to keep the coin in line with rising European gold prices. James then introduced the gold laurel in 1619, which superseded the Unite: Valued at twenty shillings, this coin was again effectively a sovereign, but named due to its depiction of the King wearing a laurel wreath instead of a crown.

The unite was reintroduced by Charles I and unites were made by him in many slight variations, together with a half-unites, at various mints around the country. The Tower Mint varieties are more commonly seen nowadays, however unites from Bristol, Truro, Exeter, Worcester, Shrewsbury and Pontefract are very rare and valuable nowadays.

The unite was again struck during the commonwealth period (1649-1660). In keeping with the rejection of monarchy, the coin made a strong break from tradition - featuring no portrait, but St. George's Cross and an Irish Harp in shields instead of the Royal bust. The inscriptions too were changed - appearing in English instead of Latin - which was considered to savour too strongly of Catholicism. The Roman numeral "XX" appeared, to denote the value of twenty shillings. No "half unite" appeared at this time, however there was a "double crown" of ten shillings which was effectively the same coin.

The unite was again issued from 1660-1662 by Charles II (1660-1685) and these were the last unites ever made. This was the last set of hammered gold coins issued in England: In 1663 machinery was introduced that superseded the old hand-hammering process of coin manufacture and new coins were introduced at 100 shillings, 40 shillings, 20 shillings and 10 shillings; however these coins were called guineas in reference to the fact that the gold use to make them had been mined in Guinea, Africa.