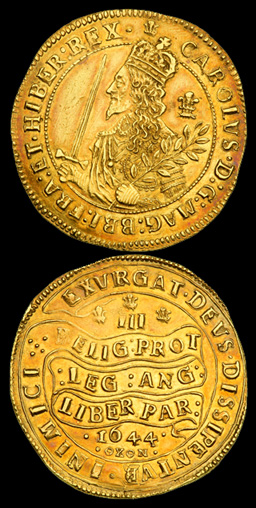 The gold unite was a coin of the seventeenth century with a value of twenty shillings. Unites were issued by James I, Charles I, Cromwell and Charles II. The unite superseded the gold sovereign - a successful denomination which had been struck until 1604, in the reign of James I.

From 1642-1646, during the civil war period, Charles I issued a fantastic triple unite, valued at sixty shillings - the highest denomination hammered coin ever circulated in England. *

Triple unites were minted at Shrewsbury and Oxford mints and these coins were spectacularly large gold coins, around an inch and three quarters across - the largest hammered coins ever issued as currency in England. The coins weighed around 27 grams / 420 grains Troy.

Charles was a monarch in trouble - and it is held by some that his arrogance was one of the causes of his downfall. On some of his coins the words "Christo Auspice Regno" appear - "I rule with Christ's approval". This issue of his belief in the "divine right to rule" was cause of much consternation and drove his enemies to make war against him, ultimately playing a very significant part in his demise.

The triple unite did not bear these words, however in some ways can still be seen as an imposing coin - not only by virtue of its large size and denomination, but by its design. On the obverse, Charles is depicted with sword raised in challenging posture, somewhat like that seen on coins of some of the warrior kings of ancient days. However he carries an olive branch in his left hand and a plume appears behind him. The obverse legend reads -
CAROLUS:D:G:MAG:BRIT:FRAN:ET:HI:REX. This is shorthand Latin and means "Charles by the Grace of God King of Britain, France and Scotland" and this was a very standard inscription for a coin to bear.

On the reverse, a "scroll" appears in the inner circle, bearing the words "RELIG PROT LEG ANG LIBER PAR - "The religion of the Protestants the laws of England the liberty of Parliament." This appears as a reminder of Charles's political promise that he would preserve these values, despite being at war with Parliament. Above the scroll are three plumes - the mark of mintmaster Thomas Bushell of the Aberystwyth mint (Wales), whose equipment was used for the Oxford coinage. The Roman numeral "III" is short for three pounds, the value of the coin. In the outer circle, the inscription reads EXURGAT DEUS DISSIPENTUR INIMICI - "Let God arise and His enemies be scattered."

From the Shrewsbury Mint, there is only one triple unite type listed in the coin catalogues, dated 1642. (S.2723) The simplest way to recognize one of these coins from the "Oxford" variety is that the scroll of the Shrewsbury has only two lines of text instead of three. This coin is extremely rare. A good condition example appearing at auction would probably realise a six figure sum in pounds or dollars.

There are several minor variations in design of triple unite from the Oxford Mint (S.2724-2730) and several slightly different portraits appear. Of these coins the variety with the small lis mint mark and the short olive branch is the rarest, however all are rare and valuable nowadays, with examples reaching five or six figure sums at auction. The Oxford coins are all dated from 1642 to 1646. It is said that much of the metal for Charles' Oxford coins was derived from plate donated by Oxford university.

To what extent Charles was aware of his impending fate is perhaps a matter of conjecture. Looking at the raised sword on the triple unite his defiance is visible, yet at the same time his holding of the olive branch and concession to the right of Parliament indicates effort to appease his enemies. It seems he was making attempts at P.R. after all, however the ambitions of his enemies were grand. It is not to difficult to sense the tension that must have been in the air at that time of civil emergency and disquiet.

* Note - a triple sovereign of Henry VII is known, in unique example. This coin was a "piedfort", triple the thickness of the ordinary sovereign, and was not circulated - probably being struck to make a unique presentation piece.