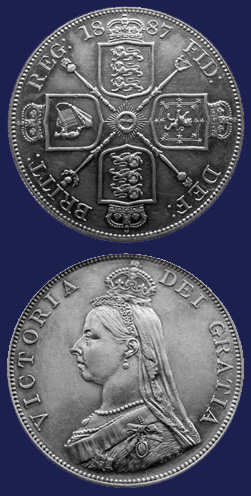 From 1887 to 1890, a double florin was minted in the UK. In keeping with the old tradition of making coins' denominations and weights proportional, the double florin was twice the weight of the ordinary florin (thus containing twice the amount of silver) and featured the same basic design as the Jubilee florin: The "Jubilee Head" of Queen Victoria engraved by Leonard Charles Wyon on the obverse, and a cross of four crowned shields with sceptres-in-angles on the reverse.

Coins of 1887 are in general more likely to be found in uncirculated condition, as people liked to keep them as jubilee souvenirs - and the 1887 double florin is no exception.

Several minor variations of these coins exist, notably with use of the Arabic style "1" to replace the Roman "I". There are also some with an "inverted 1" in VICTORIA. [1]

Several further pattern double florins are known to exist; these were not made for ordinary circulation but were made as test pieces or for presentation. Examples include: 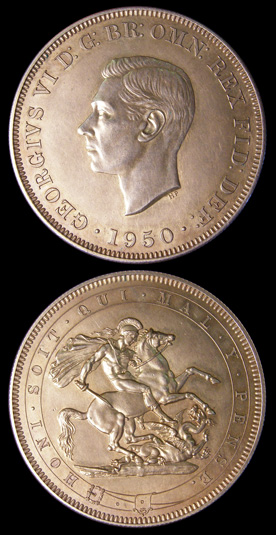 1890 uniface Pattern Double-florin - struck in silver by L.C. Wyon. Plain edge and with design only on one side (reverse). Only one known specimen. [4]

1902 - Edward VII struck in aluminium. Seven further strikings in plated and base metals. [7]

1911 - George V; a set of ten pattern double florins were made. These were struck in vaious metals at varying thicknesses (up to 5.8 mm thick flans) and were clearly experimental pieces. Some feature the words "DOUBLE FLORIN" on the legend, others state "TWELVE GROATS" (the total is the same amount.) Examples of these coins were listed for sale by Baldwins in 2011 - included were 1911 double florins in lead, silver, Anglesey Copper, iron, zinc, copper and, surprisingly, cadmium (highly toxic!) [5]

1963 - Elizabeth II pattern double florin. Said to have been made and to be unobtainable. [10] "Retro" sets exist - see below.

Numerous modern fantasy patterns can be seen in a wide range of dates. Simply go on ebay and type "pattern double florin" to see some.