What is a Florin?

Florin was the name given to a type of gold coin first issued from the Republic of Florence in AD 1252. Since then, the name florin has been "adopted" by several other nations and used for coins of various denominations in various times. So when someone speaks of a florin, one must ascertain which florin they are referring to, as the florins of various countries are not necessarily directly related to one another.

In 1343, King Edward III of England wished to create a gold coin compatible with the equivalent Italian and French gold coins, which were in wide use by that time. He commissioned the design of the first English florin - in gold, not silver. It was specified by an indenture (legal contract) of 1343 that fifty of the coins would be made from each Tower pound of fine gold - meaning that the coin weighed 108 grains, exactly double that of the Florentine coin and the petit florins of France.

The coin featured a glorious design by George Kirkyn and Lotte Nicholyn of Florence. The English gold florin was also known as the double leopard owing to the leopards (actually lions [7] ) either side of the King on the coin's design. The face value of the coin was set to be equivalent to six silver shillings - however it appears that a misunderstanding of the gold-silver price ratio caused the downfall of the coin: At the time of their release in 1344, the florin's gold content was worth less than their stated value, meaning that merchants would not accept them! This disaster meant that the coins were recalled in August 1344 and melted down, being subsequently replaced by the Noble which became a successful, popular coin.

For five hundred years no further English florins were produced and the coin seemed confined to history books. However fast forward to 1847 and discussion of decimal currency was under way in the English House of Commons. A new silver coin was one of those being proposed; valued at one tenth of a pound or two shillings and with a weight in proportion to the weight of the other silver coinage of the day. (At that time, English silver coins all contained a weight of silver corresponding to their monetary value - so that for example five one shilling coins weighed the same amount as one five shilling coin.)

As it was uncertain whether the new decimal denomination would be popular, it was agreed that the coin would be struck in order to test public opinion. Various names for the coin were put forward including Centum, Decade and Dime - but, perhaps inspired by the "Gothic revival" under way in the 19th century, and by the fact that other countries had florin coins of similar size or denomination, the ancient name "florin" was chosen for the coin. [3]

The 1848 florin was the first of the new silver florins. Only a small number were made, as patterns, and these are now scarce. The official release commenced in 1849 (image below) with 413,820 florins being recorded as minted in that year. Undoubtdely the designers of this coin intended to make a bold statement, as the coin design was "radical" in several ways: It featured a crowned Queen Victoria, the first time a monarch had been seen crowned on an English coin since Charles II. [10] The design of both obverse and reverse stood out in many ways, but the makers made a very grave error of judgement: For many centuries prior to that time, the name of the King or Queen on English coins was always followed by either the legend Rex / Regina Dei Gratia or its abbreviation, Rex / Regina D.G. This stood for "King / Queen by the Grace of God". On the 1848 Florin, the D.G. was ommitted, leading to the coin being disliked. It was nicknamed "Godless and Graceless", a clever but unfortunate pun which stuck: Even now the 1848-9 florin is universally nicknamed "The Godless Florin".

The popularity of the Godless florin (above) was low, however with the next issue, in 1851, the D.G. was reinstated and a striking "gothic" font was used for the lettering. In 1851 only 1,540 of the new gothic florins were minted, possibly all being proofs as the coin did not become legal tender until 1852. However the new design was evidently popular as millions were made in the following years. The "gothic florin" (below), along with the "Gothic crown" of similar design, were very successful. With the elegant lettering, ornate bust of Queen Victoria on the obverse and "celtic cross shape" of the four shields of the reverse design, these are now considered among the most attractive and popular British coins ever made and in the higher grades are especially prized by collectors. The gothic florin was minted, with numerous subtle varieties, until 1887 when the redesigned "Jubilee" florins succeeded them. [10] 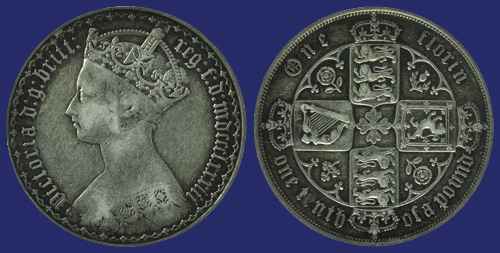 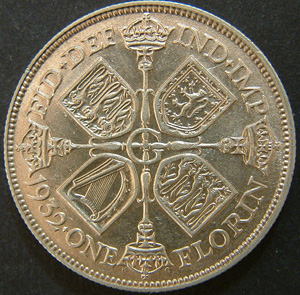 Silver florins continued to be made in various designs and formed a series that was minted in most years for over a century, all the way up until decimalization in 1970. English silver coinage was debased from .925 to .500 silver in 1920, and all silver content was removed in 1947, being replaced with cupro-nickel alloy. The words "one Florin" were removed in the 1937 issue and replaced with the words "two shillings", although the coins had identical currency value, contined to be made at the same size and were still called florins by many. [11]

In the 20th century, silver florins were also minted by various other countries, including countries that were part of the British Commonwealth.