The groat was an English silver coin with a value of four old pence. Its name has connections to old words in several European languages for "Great" - such as the Dutch groot, the French gros and the Italian Grosso, all of which had the same meaning. The coin was so named because it was larger and thicker than the penny, which was the predominant coin at the time the first groat was introduced - the year 1279. [1] The use of the groat continued through to the 19th century, and was eventually only included in Maundy Money sets, which sometimes however found their way into ordinary currency use. 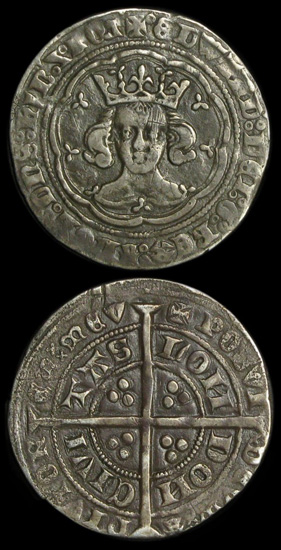 By the time of Edward I (1272-1307), the only coin in common circulation in England was the silver penny. The French had successfully introduced a higher denomination silver coin, the gros tournois, in the 1260's. Edward I's introduction of the groat was not a success: The public, as has since been demonstrated on many occasions, is way and suspicious of changes to the coinage, sometimes preferring things simply to remain as they are. However, Edward's coin, valued at four pennies, weighed less than the four pennies it was supposed to be equivalent to! This spectacular error meant that people were unwilling to accept them. Eight varieties of Edward I groats exist, and all are rare. The coins are often found damaged or with indication that they were incorporated into jewelry at some point (evidence of gilding or soldering). [2]

After the initial failure, no further groats were produced until the fourth coinage (1351-1377) of Edward III (1327-1377). These coins look similar to other groats of the same era, with the King's portrait facing the viewer, and a "long cross" design on the reverse of the coin. Numerous subtle varieties of these coins exist - including legend errors, mint mark variations, subtle design changes and changes to the legend that were indicative of Edward's aspirations to the the French throne.

From the time of Edward III onwards, the groat was accepted by the public and became a common part of the currency. Mintage of the groat was continued by the subsequent monarchs. The groat of Henry IV (1399-1413) is noteworthy. These coins, as with all other coins of Henry IV, are rare. The groat was only issued during the "light coinage" of 1412-1413 and three varieties appear. The coins are difficult to distinguish from the groats of Henry V, VI and VII - all of which bear the legend HENRIC without stating which Henry in particular they belong to! Henry IV's groats can be identified positively by portrait, which although similar does have differences, and by the mintmark of the cross pattée (similar in style to the 'iron cross' - see right) which appears above the King's crown in the obverse legend. If the coin is badly clipped or worn, identifiation could prove challenging. [2]

Groats of Henry VI are much more common and obtainable. Again mumerous varieties exist, and the coins were minted at London, Calais and York mints.

Hammered groats were produced throughout the 15th century. Edward VI (1547-1553) introduced the sixpence and threepence in the latter part of his reign to supersede the groat; and all the groats produced in his early reign were debased and have a dull appearance.

Groats were again produced by Mary, Philip and Mary and Elizabeth I. It was around the time of Elizabeth that the word 'groat' began to be replaced by the word 'fourpence'. No groats were minted during the reign of James I (1603-1625), as he was instead using the sixpence and twopence coins. Charles I reintroduced the groat but only produced them at the provincal mints, not in London.

From the time of Charles II onwards, these coins were milled (machine made) and were now referred to as 'fourpence'. At first, an undated fourpence coin was made and this has been estimated to have been produced in around 1664 or 1665. In 1670, the coin appears with a date, and from that point on was minted regularly. Although often considered Maundy coins, these milled fourpences were in fact used as currency. It was not until the reign of George IV (1820-1830) that the coins were used almost exclusively as maundy money. From 1816 onwards, the coins weighed 1.8 grams and had a diameter of 19mm - and have continued at this size ever since, still being included in Maundy sets minted to this day.

One further type of groat was created - the "Britannia Groat" of 1836 to 1888. Slightly smaller in diameter and thicker than the "Maundy" type, this coin invariably featured the famous design of Britannia seated on the reverse. Initially a popular coin, it came to a troubled end: it was exactly the same diameter as the silver threepence that was introduced in 1845! This caused much confusion - and after 1855, the Britannia groat was no longer produced, apart from proof-only issues in 1857 and 1862, and in 1888, when an issue was created for use in British Guiana.

The Britannia groat forms an intriguing yet relatively attainable series for the collector. Numerous plain edge proofs exist - and these may occasionally be found in circulated condition, so be sure to check the edges of any of these coins! Also there are numerous 'overdate' varieties and some interesting errors, such as the mildly amusing "1838 8 over horizontal 8" variety. [3] The Britannia Groat, being a smaller denomination, is a series which is not as difficult as some of the larger denominations such as the crown, which requires deep pockets to form a strong series.