Prior to the introduction of the silver halfpenny, the predominant form of currency in England for several centuries was the silver penny. Coins in those days were made by 'hammering', a process that involved striking a disc of metal that had been placed between two dies bearing the inverse of the intended design. Fractions for smaller transactions were created by cutting the coins into halves or even fourths (hence the name farthing, derived from the Anglo-Saxon 'fourthling'.) [1] Although the halfpenny would clearly have been a useful coin in those times, the coinage system was highly simplified compared to that of today and the penny was the only coin in general use at that time. 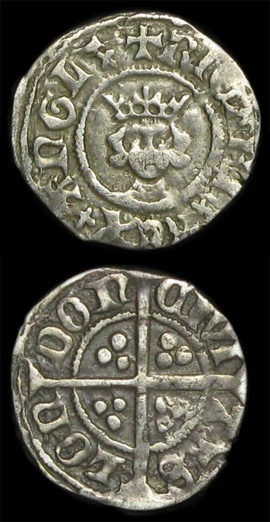 The English halfpenny first appears to have been minted during the reign of Henry I (1100-1135). Only a very few of these coins have been found, by metal detectorists. Two issues are known; one with an uncrowned bust of the king on the obverse, the other with a crowned bust. Both the two known issues are described as being extremely rare and possibly intended only as a trial. [2]

The next halfpenny to be made was that of Henry III (1216-1272). These coins too are extremely rare now, and were only discovered in the late 20th century. Two issues are known, both being similar 'short cross' designs to the silver pennies of the day, but made at half the weight. [2]

Edward I's halfpenny is considered to be the first fully successful introduction of the halfpenny and from his time onwards the halfpenny was a standard coin. Hammered silver halfpennies are very small coins, being typically half the weight of the silver penny - and as a result appear to have posed a challenge for the early manufacturers owing to the difficulty of making such small dies well. The coins are often found clipped (i.e. with edges removed in order to gather silver for profit) or in fairly worn condition, however coins of many issues in collectible condition can be obtained.

The denomination of coins of this period were not written on the coin, however the monarch's name (or an abbreviation of it) appeared on the obverse. Edward I issued halfpennies from several mints and the name of the mint is inscribed on the legend of the coins reverse: CIVITAS LONDON or LONDONIENSIS = London Mint; VILLA BRISTOLLIE = Bristol; CIVITAS LINCOL = Lincoln; NOVI CASTRI = Newcastle; CIVITAS EBORACI = York; VILLA BEREVVICI = Berwick. Sometimes these reverse legends contain errors or may be otherwise illegible.

Small silver hammered halfpennies continued to be made in similar style until the end of the commonwealth period (1660). No halfpennies were minted during Charles II's hammered coinage (1660-1662). In 1672 a new coinage was introduced, however the halfpenny from that date onwards was made in copper, tin or other metals. [2]

As with many other coin denominations, occasional proofs of the halfpenny appear in silver. These include:

The 1861 appears, from catalogues, to be the last silver halfpenny to have been minted. After decimalisation (1971) , a small bronze halfpenny was made for several years however none of the proofs appear to have been made in silver.