The shilling was a silver coin denomination first introduced in the "profile" issue of King Henry VII (1485-1509). Its value was twelve pennies, equivalent to one twentieth of a pound. These early "shillings" were known as testoons at the time and not much is known about them as documentary evidence has not survived. [1] The coin continued to be known as the testoon through the regin of Henry VIII and gained the name shilling during the time of Edward VI (1547-1553). 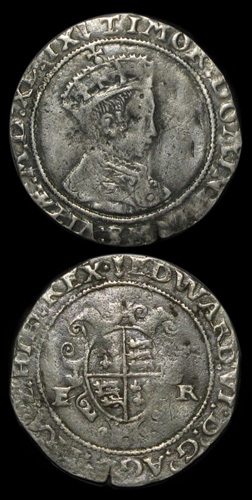 The testoon was continued by Henry VIII and it was not until the reign of the next monarch, Edward VI, that the coin became known as the shilling. The shillings of Edward VI have been categorized into three types: First came the "posthumous coinage" (1547-1551) which was heavily debased and continued to bear the portrait of Henry VIII. As Henry had debased the coinage, it is thought that Edward VI continued to mint coin with Henry's portrait so as to get away with continuing to issue poor quality coin! The second category of shillings issued by Edward (from 1547-1551) were also base coin, but with his own portrait however. Many of these coins are obtainable although often are in poor condition. Finally in 1551, Edward issued a series of coins in fine silver.

Great profit was gained at the expense of the nation by the insidious practice of issuing low grade coins. The process was simple: High quality coin or other silver received at the mint could be melted down and made into a greater number of coins by the addition of base metal to the mix. It is said that as Edward gained the throne while still a boy, the decision to mint base coin was influenced by members of his council: however he is credited with the decision to restore the coinage to fine silver - a move which was very popular with the public after several years of being oppressed by the issue of poor quality coins. [1]

From the time of Edward VI until the time Charles I left London, it was pretty much "business as usual" for the shilling, with hammered coins being produced regularly. Some of the more curious and unusual English coins were those issued by Charles I in the latter part of his reign, while the king was "on the run", being pursued by the armies of Cromwell. For the first time these coins were minted in non-round shapes including the lozenge (see image right) and the octagon. Some of these coins are extremely rare and valuable. Many are found with discrepancies in weight and the simplified designs bear testimony to the troubled times with the appearance of having been made in haste. [1]

The (round) shilling was again struck in quantity during the Commonwealth period (1649-1660) and under Charles II. Many of these coins are now very rare, with the 1659 being reported as possibly unique.

A Cromwell shilling was issued in 1658 and is obtainable. These coins were of very high quality, being made using milling, which was a new technique at the time. Forgeries of these coins are known to exist. There is also the intriguing possibility of a 1656 shilling - although no examples are currently known: Snelling [3] (p.44), writing in 1762, mentions that "a few" examples of this coin were known, dated 1656. He also mentions a 1656 half crown, which is known. Perhaps the 1656 shilling was indeed lost and will one day reappear; if one is found that can be ascertained as genuine, it will of course be very valuable.

From 1660 onwards, shillings continued to be milled in sterling silver until 1920, when the silver content of the coins was reduced from 92.5% to 50%.

The shillings of Charles II, William III, Anne, George I and Victoria in particular form complex series', with numerous variations and proofs appearing. From 1864 to 1879 the shllings of Victoria also included die numbers, generating further interest for collectors - although it should be noted that as the number is tiny, and the majority of coins in worn, circulated condition, the die numbers are often not legible.

Another interesting curiosity was the "double headed" shilling of 1953, which adds a twist to a game of "heads or tails"...

[1] Coincraft's Standard Catalogue of English and UK coins
[2] http://en.wikipedia.org/wiki/Shilling
[3] "A View of the Silver coin and coinage of England" - Snelling, 1762. http://books.google.com/books?id=PJRMAAAAcAAJ&pg=PA44