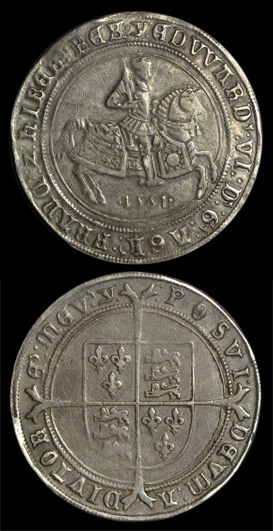 The Silver Crown was introduced by Edward VI (1547-1553) during his "fine silver" issue of 1551-1553. This coin issue is so named because it was a return to the use of high quality silver after years of debased, poor quality coin being manufactured. These coins were large and of good quality - and all silver crowns produced since have been large coins. The silver crown of Edward VI featured a striking image of the king on horseback on the obverse, and a shield and "long cross" (i.e. extending to the edges of the coin) on the reverse. It was also the first English coin to feature the date in Arabic (i.e. ordinary) numerals as opposed to Latin numerals. [2] These coins, being of high quality silver, were popular with the public. Many of these coins have overstruck dates (i.e. 1553 over 1551) and a large number of die varieties (subtle variations) exist. 1552 is the rarest of the three dates.

No crowns were issued by Mary or Philip / Mary, and the crowns struck during most of Elizabeth I's reign were gold. Finally, in 1601 and 1062, silver crowns were made. These do not bear the date, but in the same manner as the half crown, have a mint mark of "1" or "2" and this denotes 1601 or 1602 respectively. The 1602 type are more difficult to find. The coin features a bust of Elizabeth facing left on the obverse.

Crowns were minted in both silver and gold during the reign of James I. James' crowns return to the obverse design of the king on horseback, with a shield (royal arms) on the reverse. The coins are scarce but obtainable in Fine condition, and considerably rarer in EF. The English coins are very similar to the Scottish crown. 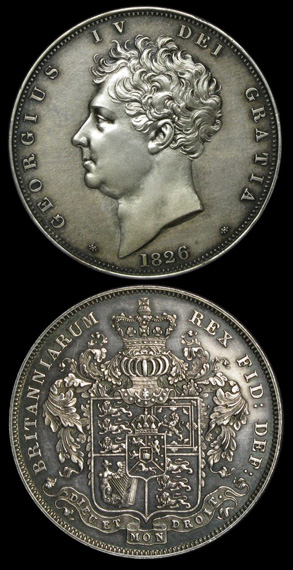 Under Charles I, both silver and gold crowns were again produced. Numerous varieties were made, first at the Tower Mint and then at the various provincial mints during the civil war. Worthy of note is the rare "Briot" crown (1831-1839), which was milled as opposed to hammered. The milled coin is immediately and obviously different visually, having a more uniform, machined appearance.

During the commonwealth period (1649-1660), both gold and silver hammered crowns were produced. A milled crown was produced under Cromwell in 1658 and this is sometimes described as a pattern coin - although it is known to have entered circulation.

Only gold crowns were produced during the hammered coinage of Charles II. Then from 1662 onwards, milled silver crowns were produced in very great quantity throughout Charles II's reign. These coins are easily obtainable in low grade, however become rare and expensive in Extremely Fine condition. Many varieties exist, including "overdates" and edge date errors.

Crowns continued to be made at similar size throughout the 17th and 18th centuries. One "crown" worthy of note was the countermarked Spanish 8 reales, (Spanish American silver dollar) a similar style coin, which was circulated during the reign of George III (1760-1820). In 1804 the silver dollar coin was completely overstamped with an English crown design. Occasionally, the date of the old coin is still visible underneath, and in some cases this date is after 1804, proving that the 1804 stamp was used for several years. [1]

The only "true" crowns of George III were issued after the Great Recoinage of 1816. 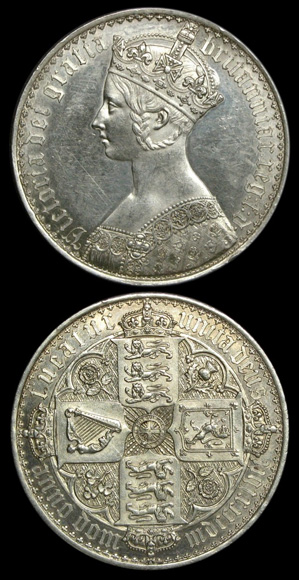 Crowns were issued by George IV (1820-1830) and William IV (1830-1837) - and then by Victoria. The Victoria silver crowns are some of the most famous, and include the renowned 1847 and 1853 "gothic" crown (see image). This crown has been considered by many to be one of the most attractive designs of British coin ever produced. A striking departure from previous designs, the coin featured gothic edge lettering and a marvelous portrait of the young Queen Victoria. Numerous varieties of the 1847 crown exist - including plain edge proofs, frosted proofs and a legendary gold proof, of which only three exist. Two of these are in museums and the third sold in 1988 at auction for a then-record price of £120,000.

Numerous forgeries exist of the 1847 crown and the coin requires expert identification. In particular, one of the "giveaways" is that the genuine coins feature gothic lettering that is flat on top, with sharp edges. Lettering that is 'bulbous' or curved on top denotes a fake coin. Another giveaway is the "harp strings" on the reverse, the arms of Ireland: The strings should appear straight and precise. In general it is good to have a genuine coin on hand for comparison and of course a good magnifying glass or loupe.

In addition to the gothic variety, Victoria's crowns include:

"Crown-sized" commemorative coins have been made by the royal mint since decimalization, and sometimes proofs of these coins are issued in silver (as well as in gold), in limited edition, for collectors. Examples include 1972, 1977, 1980, 1981, 1990, 1993, 1996, 1997 etc. In modern times these coins are given a nominal value of five pounds instead of five shillings, but are made at the size of the old crown coins.

The English / British silver crowns comprise a formidable and challenging series for the collector: There are very many types, with the coins being large and visually appealing. However older crowns in superior condition can often be expensive, putting a serious crown collection beyond the financial reach of many.