The English Silver Penny is one of the most long-lived denominations in the entire history of coinage. Silver pennies have been in use for well over a thousand years and for many centuries were the most widely used form of currency in England. The English silver penny was based on coins used by the Romans. 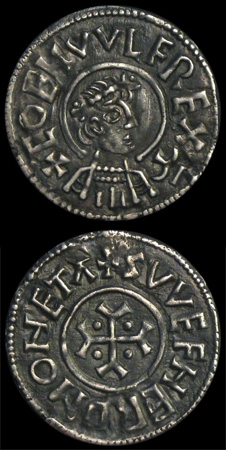 The Romans and Greeks had coins somewhat equivalent to a penny - the Greek Drachma and the Roman Denarius. The Roman Denarius was standardized in 211 BC at 1/72 of the Roman "Libra" pound (around 4.54 grams) and was intended for use as everyday currency. The Libra weighed around 327.168 grams and is the origin of the "lb" abbreviation for the pound. The old symbols for pounds, shillings and pence in England were based on the letters L, S and D and are derived from the Libri, Sestertii, Denarii of Roman denomination. The value of the Denarius was gradually debased by later Roman Emperors. [1]

Prior to the 7th century, Anglo-Saxon Kings typically used gold coins - however gold was scarce and the system was thus flawed. [2] In around 735 AD, Pepin the Short introduced the novus denarius at 1/240 of a pound (of silver), and King Offa, (King of Mercia from 757-796), followed his model, introducing the silver penny to England. Offa's Pound was the Saxon or Tower Pound of 5,400 grains, meaning that his silver penny weighed 22.5 grains (1.458 grams). 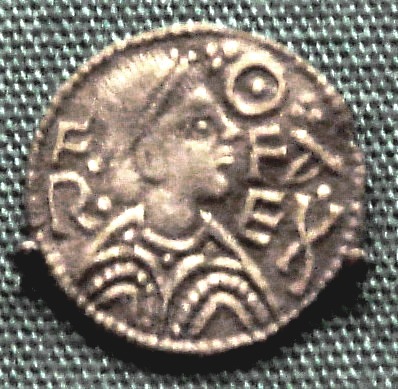 This 240-base system became universal, although the pound varied in weight throughout time and location. In 793-4 it was decreed by Charlemagne that 240 pennies or pfennigs were to be minted from one Carolingian pound of silver, (the Carolingian pound weighed approximately 326 grams / 11.5 oz). Coins of that time were not alloyed as they are in modern times, and therefore a single penny of that day would contain approximately 1.358 grams of fine silver when correctly minted. In that era, there was no one standard set of weights and measures, however the Troy weight system came to dominate with the reign of Henry I of England, who increased the weight of the English penny in AD 1158: The Troy Pound contained 5760 grains, and twelve troy ounces of 373.24 grams.

In the old Troy weight system, as with more ancient systems, silver weight and monetary value were tied together: One pound of money contained exactly one Troy Pound (weight) of fine silver. A pound contained 20 shillings / 240 pennies - and the silver penny contained one pennyweight = 24 grains = 1/240 of a Troy Pound - of pure silver. The old silver penny was thus a bullion coin, its market value ultimately derived from the amount of precious metal it contained. 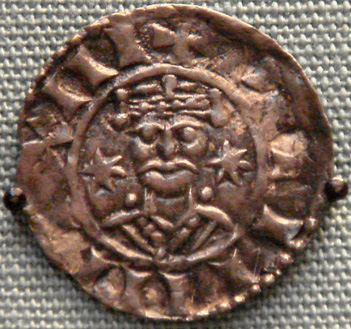 This system worked very well for a very long time - and in those days there was little inflation, because money itself was not only a system of price but was absolutely tied to real, tangible goods by the use of precious metals as currency. However debasement, the eventual rise of paper money and fractionalized banking were factors in the demise of the silver penny - because money became worth less than the precious metal it was made of. From 1670 to 1816, silver pennies weighed around half a gram and had a diameter of 12mm. Then after the "Great Recoinage" of 1816, the pennies were reduced in diameter to 11 mm.

Hammered silver pennies were made by placing a disc ("flan") of silver between two dies and striking with a hammer. This practice was done by hand, which explains the "off-centre" or uneven strikes so often seen. In the late medieval period, the penny was the most important and widespread type of coin - and millions were minted at twelve mints in Britain. 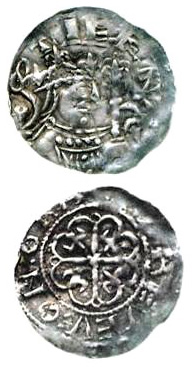 Other denominations of coin were scarcely minted in England between the 7th and 13th centuries: Larger denominations were seldom required and silver pennies were cut into halves or quarters in order to create the halfpenny and farthing (quarter penny) fractions. [3]

To give some idea of the amount of coin in circulation in those times: The British Numismatic Journal, Volume 31 reports that from Michaelmas 1302 to Michaelmas 1307, some 240,000 pounds of silver were struck at the London mint - 57,600,000 silver pennies! [4]

These years were by no means extraordinary: It was estimated that in 1205 there were around 60,100,000 pennies in circulation in Britain. It is thought that England's silver wealth derived in large part from international trade, particularly the export of wool to the cloth industry of Flanders and Brabant. [5]

Hammered coinage was phased out in the time of Charles II (around 1662) [3] and was prohibited from circulation in January 1697, [6] in line with the Great Recoinage of 1696.

Many hammered silver pennies found their way abroad: Sometimes through legal trade, sometimes through the black market as the English fine silver was at times of higher purity than other European coins.

Hammered silver penny hoards are still one of the most frequent forms of "buried treasure" discovered by treasure hunters: In medieval times, hoarding of silver was common and hoards were often buried for safety. It was not uncommon for misfortune to occlude the location of the treasure, especially in turbulent times: Imagine a scenario where a person buried their wealth, as was so common - and then were overtaken by sudden calamity and took their secret to their grave. It happened innumerable times - and every so often, hoards of these old coins are still found - sometimes containing thousands of coins. 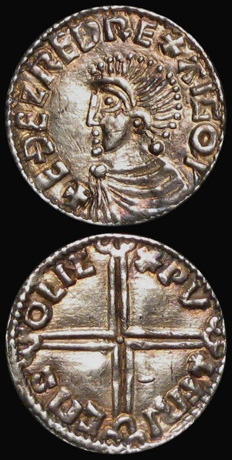 Although "long cross" designs had already been used at times on silver pennies, such as the Long Cross silver penny of Aethelred II (978-1016) (right), the Long Cross penny was introduced in the recoinage of the year 1247 to replace the "short cross penny". The long cross coin featured an equal-armed cross extending to the edge of the coin - and was intended to show where the edge of the coin should be, in order to reduce 'clipping'. Clipping was the practice of shaving a small amount of silver from the edge of a coin before passing it on in an illegal attempt to profit. In those days, coin clipping or forgery was considered a very serious offence, yet these dishonest practices were common.

For the recoinage of 1247, it was deemed that the public would only receive as many new pennies as the weight of the old coins brought in would make up, minus a five percent charge for the re-minting service. [7]

Long cross designs were widely used for many issues until the 17th century. Despite the long cross, coin clipping persisted until milled coinage was introduced in 1658 to replace hammered coins.

The first copper pennies were made in 1797, then 1806 - and these became the 'normal' currency. However, the silver penny continued to be made as part of the "Maundy Money" - a set of four silver coins made to be donated by the reigning monarch to the poor or elderly. The silver maundy penny, at around 0.5 grams and 11mm, is the smallest and lightest coin in the British denominations.

The Maundy tradition was said to have been started by King John in the year 1213. [8] Interestingly, the silver Maundy Penny continues to be minted: Although in 1920 the silver content in the general coinage of Britain was reduced from 92.5% to 50%, and then in 1947 coins were no longer made of silver, from 1947 onwards the Maundy pennies returned to their 0.925 silver content - and approximately 1,600-1,900 sets are still made in silver each year. Thus, astonishingly, the silver penny continues to live on while other denominations come and go.