The English Silver Sixpence was an enduringly popular coin that was in use in Britain between AD 1551 and the late 20th century. Even now, the sixpence is considered a "lucky" coin, and it is traditional for brides to put one in the left shoe on their wedding day, still creating their costume according to the old rhyme "Something old, something new, Something borrowed, something blue, And a sixpence for her (left) shoe." 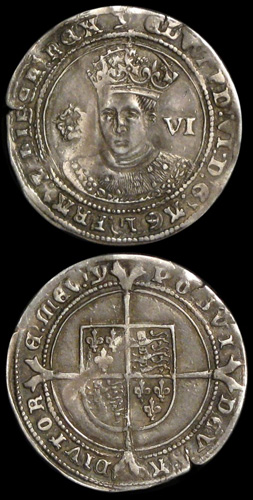 Many ancient cultures believed that some types of coins possessed the ability to imbue the holder with luck, more commonly related to the realm of the financial. The idea that coins can bring about luck or be the medium by which luck can manifest can be traced back to as early as the Ancient Greeks, where silver coins were believed to have value in both the realm of the living and the land of the dead. Greeks used to place coins on the eyelids or mouths of the departed, to act as ‘fare’ or payment to the psychopomp Charon, who ferried the dead to the Underworld. Chinese cultures believed that coins strung up and made into fanciful designs such as swords or orbs would bring luck and health to the bearer, as well as ward off evil. In European practice, more so for English, Irish, and Eastern European peoples, coins that are said to bring luck are usually called ‘touch pieces’, due to the fact that they have to be touched or kept near the person’s skin in order for whatever magickal properties they possess to ‘rub off’ on the person[2] . Such coins are usually made of a metal with reputed magical properties, such as gold or silver, or they may contain auspicious symbols generally considered lucky or holy by the bearer of by the general populace.

Initially minted sometime in the middle of the 1500s, the silver sixpence was traditionally considered a lucky coin and became the focus of several long-standing traditions. A sixpence was carried in a drawstring purse in the belief that even a single coin helps to ward off bad luck, or else placed in a the shoe (or shoes) of a bride to ensure prosperity (as some versions of the superstition or practice is wont to relate)[3] . In old times, a silver sixpence was put into Christmas puddings, to be found and kept by a lucky child. Also, the Royal Air Force still carry sixpences, sewn into their wings or brevets for good luck - a tradition dating back to World War II. [1]

While other ‘touch pieces’ were usually larger coins depicting images of a slain or defeated devil, such as the St George and the Dragon coins or the Angel coins of Henry VIII, such coins were harder to come by for most of the populace – and so the silver sixpence became the commonplace luck-bringer. Being made of silver, itself an auspicious metal that was said to ward off demons and evil entities, it also represented a fortune to the peoples belonging to the lesser rungs of society, thereby becoming twice auspicious.

During the reign of Henry VIII (King of England from 1509-1547), the coinage had been deliberately debased - coins being made from silver of a lower purity. This practice continued in the early reign of Edward VI (King from 1547-1553) and became so scandalous that by 1551, the coinage consisted of one part silver to three parts base metal - and not only this but by this time, seventy-two shillings of silver were coined from one troy pound of metal! In other words, far from the "240 pennies to the pound at .925 fine silver" of old days, currency was being issued at 864 pennies to the pound of silver, at 25% purity, [4] while the penny continued to be worth 1/240 of a pound of money. An actual pound of pure silver was thus being used in 1551 to make over 14 pounds of money!

Finally realising the grievous error of their ways, Edward VI's administration restored the fineness of the currency by 1552 to "eleven ounces and one pennyweight fine" (221/240 or .921) and a new denomination was issued for the first time - the silver sixpence. However, the silver value of the coins was still much smaller than ancient days, sixty shillings of money being made out of one pound of silver in this 1552 coinage. [4]

The new sixpence coin was however readily accepted by the public, being of honest fineness, a very useful denomination and a pleasing size. These early sixpences were "hammered" (i.e. made by placing the metal disc or 'flan' between two dies and striking with a hammer); larger in diameter and thinner than the later milled sixpences. These sixpences typically featured the reigning monarch's head / bust on the obverse, with either a "long cross" (an equal armed cross extending to the edge of the coin) or a shield design on the reverse. From the time of the reign of Philip and Mary onwards (1554-1558), all sixpences were dated on the reverse, a practice that continued throughout the life of the sixpence until 1970. With the exception of the 1646 "Newark" sixpences, which were diamond-shaped, all the hammered sixpences were round and of similar size until the time of Cromwell, when a smaller coin of 3 grams weight / 21 mm diameter was struck in 1658. [5] 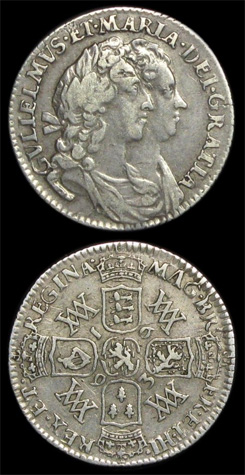 The first milled sixpence arrived later than milled coins of other denominations, in 1674. It featured "straight across" edge milling and was around 3 grams weight / 21 mm diameter. The coins continued to be made at a similar size until the "Great Recoinage" of 1816.

It is sometimes thought that with the introduction of milling the problems of underweight coin were solved. However in 1742 Peter Vallavine (probably in his "Observations on the current coin of this kingdom" although I have not obtained a copy of this document) noted that the sixpence was "the subject of daily complaint... A good sixpence should weigh 46 and 56/124 grains, but not one in fifty weighs above 39 grains, and some 30 grains". [4] The lettering being a short distance from the edge of the coin, people still filed away the edges!

Indeed, the coinage is reported by historians to have fallen into an ever-worsening state throughout the 18th century, with much counterfeit, gilded (silver coins made to look like gold), shaved or base coin in circulation. By 1771 it was said that three quarters of the silver coin in circulation was base. [6] Good quality coins were exported or melted, and together with financial instability created in Britain by the French Revolutionary Wars (1792-1799), and the Napoleonic Wars (1799-1815), the situation resulted in the "Great Recoinage" of 1816. [7] With this second Great Recoinage (the first had been in 1696), underweight coin was called in. The "official" weight of silver coins was "reset", fixing the amount of silver in the coins until the debasement of 1920: From 1816 onwards, sixty-six shillings of money were made from one troy pound (5760 grains) of 925 silver. This meant that each silver sixpence 1816-1919 had a diameter of 19 mm, weighed 43.636363 grains (2.8275888 grams) and contained 40.363636 grains (2.61551964 grams) of pure silver. [7]

In 1920, the coinage of England was debased and silver purity was reduced to .500, the coins continuing to be the same size. After 1946, all silver was removed and the coins were made from cupro-nickel alloy.

The 1952 sixpence is well known for being much more rare than those of other years. King George VI passed away in February of that year, and a small batch of sixpences which had been minted for use in Jamaica were the only ones dated 1952 that had been made prior. Queen Elizabeth's first coins did not appear until 1953, meaning that the 1952 sixpence became one of the most rare and hard-to-find dates in recent times. [8]

Here is a list of rare sixpences - dates and variations to look out for: [4]

Another obscure piece of trivia - the sixpence acquired the nickname Tanner after the designer John Sigismund Tanner, who worked on the design of the head of George II (1727-1760) for the coin. This name stuck and sixpences were still commonly called "tanners" in the 20th century.

The End of the Sixpence:

Although decimalisation - the changeover from the old "240 pennies to a pound" system to the new "100 pennies to the pound" - was made official on February 15th 1971, the popularity of the old sixpence was so great that the official withdrawal of the coin from legal tender was postponed until June 1980. [9] The last "general use" sixpence was issued in 1967, however a special "proof" sixpence was made as part of the final commemorative proof set of pre-decimal coins in 1970. In the new system, the old sixpence became worth 2 1/2 new pence. [1]

The Royal Mint has released a line of period lucky silver sixpence coins that have been struck from between circa 1920 - 1946. These especially minted coins are unique in that they depict not the current reigning monarch, but the ruler of the period – King George VI.

Made of exactly .500 fine (50%) silver, weighing 2.83 grams and measuring 19.40mm, the coin’s obverse side depicts the late monarch George VI accompanied by the border inscriptions: ‘GEORGE VI D: G: BR : OMN: REX’ (‘George VI Dei Gratia Britania Omnia Rex’ – ‘George IV by the Grace of God King of All Britain’). The reverse side of the coin depicts King George VI’s royal cypher, a stylized monogram of the letters ‘GRI’ (often mistaken for ‘GRJ’, surmounted by a crown, dividing between it, the numbers ‘19’ and ‘45’ or a pair of other digits representing its date of mintage. The borders depict the face value (sixpence) and the inscription ‘FID. DEF. IND. IMP.’ (‘Fides Defensor Indus Imperator’ – ‘Defender of the Faith, Emperor of India’), as it was then minted when India was still under British rule.

The lucky silver sixpence comes in three distinct varieties – the normal lucky sixpence[10], the Wedding Sixpence[11], and the Christmas Sixpence[12], all of which bear the same obverse and reverse designs, and made from .500 fine silver. The lucky silver sixpence is a perfect token of caring or gesture of appreciation to a friend or loved one, or a perfect piece to carry around for luck. Being a historical coin, it is also a great addition to any numismatic collection. It’s relatively high silver content also makes it a quaint investment for those interested enough to possess a lucky bullion ‘trifle’.