The Testoon was an English hammered silver coin first struck in the "profile" issue of King Henry VII (1485-1509). Its value was one shilling, or twelve pennies - one twentieth of a pound. The coin was known by the name Testoon until the time of Edward VI (1547-1553), when it became known as the shilling. [1] The English testoon was based on silver coins of similar denomination already in use in Europe - and we have described these in chronological order. 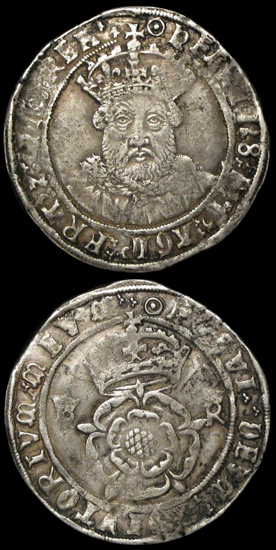 As with the florin and the Gold Angel, the testoon was not invented by the English: The testoon was named after the testone; an Italian silver coin which had first been struck from 1468-1476 by the extravagant and controversial Galeazzo Maria Sforza, Duke of Milan. The name testoon derives from the Italian teste, meaning "head" and with reference to the head of the monarch on the coin. [2]

The testone, or teston as it was called by the French, was subsequently struck by Louis XII after his conquest of Milan, and then by Francis I (1515-47) of France. Andrew Boorde, writing in his spectacularly titled "The Fyrst Boke of the Introduction of Knowledge, the whyche dothe teache a man to speake parte of all maner of languages, and to know the usage and fashion of all maner of countreys. And for to know the moste parte of all maner of coynes of money, the whych is currant in every region", published in 1547, stated: "In sylver they [the French] have testons, which be worth halfe a Frenche Crowne; it is worth 2 shillings four pence". [3][4][5]

The Portuguese also had a version of the Testoon, the Testao, by the year 1500 - and the Dutch Testoon was valued at eighteen pence in 1686. [3]

It is clear that the value of the Teston varied, and it is probably best to consider it in general as simply a "higher denomination silver coin".

In continental Europe, it appears that the testoon had a long history: Noah Webster's 1828 American Dictionary lists testoons as coins of Italy and Portugal. However, the testoon of England was to be short lived.

The English testoon was initially valued at one shilling. It is thought that the first of these coins were made from around 1502-1504, during the reign of Henry VII. Concerning the testoons of Henry VII, very little is known as no documentary evidence survives. Three different dies were made and it is thus thought that the coin was actually put into circulation, rather than being a mere pattern. [1] In those days, much European coin was in circulation in England - and people were in general more concerned with the weight of precious metal in their coins than with the face value. It was up to the individual to choose wisely which coins to accept - and so it is possible that the early testoons, being unfamiliar, were slow to become popular. [3]

After the initial testoon of Henry VII, the next testoons were those of the third and "posthumous" coinages of Henry VIII (1544-47 and 1547-1551 respectively). However, Henry VIII had debased the coinage - meaning that these coins had a low silver content - and such coins were not popular withe the public, who wished for real silver.

After Henry VIII's reign, at some point in the early part of the reign of Edward VI's reign of 1547-1553, the testoon as it was became known as the shilling. It was once again minted in high quality silver and was no longer called the testoon. I have not ascertained whether the name change was deliberate - as a means of severing association with the base coins of Henry VIII - or whether shilling was simply a more popular name that "caught on".

One thing that is known is that the base coinage of Henry VIII was greatly frowned upon by the public. Henry was melting down the high quality coin collected by his tax collectors and adding copper to make more coins from the same amount of money; squeezing the public to finance his military ambitions and profligate spending. Some coins, having a high proportion of copper, started to show copper on the high points as the coin wore - particularly the nose - leading to Henry VIII acquiring the nickname "old copper nose" or "copper nose Harry".

The end of the testoon in England was not the end of the testoon: Perhaps drawing inspiration from European coin standards, a Scottish testoon of four shillings was introduced in 1553, during the reign of Mary (Queen of Scots) (1542-1567). A half testoon of two shillings was subsequently introduced in 1555. These coins bore the emblems of France ("France Moderne" of three fleurs-de-lys) and Scotland (lion rampant within a double tressure flory) [6] but of course no "three lions passant guardant" (Royal Arms of England) as this coin was made before the union of England and Scotland of May 1st, 1707. These testoons weighed around 90 and 45 grains respectively - however several varieties of testoon were minted during Mary Queen of Scots' reign - and their monetary value also varied. [7]