The first threepence appeared at the time of the fine silver coinage of Edward VI. Edward's earlier coinage had continued in the vein of the coin of Henry VII before him: Debased, and of poor quality. However with the fine silver issue, Edward not only made amends but introduced new denominations: The sixpence and threepence. The new threepence was easily identified by the Roman numeral "III" appearing next to the king's head on the obverse. However, despite being made of fine silver and of a convenient denomination (four to the shilling), the coin (like many other coins when introduced for the first time) was initially unpopular. [1] 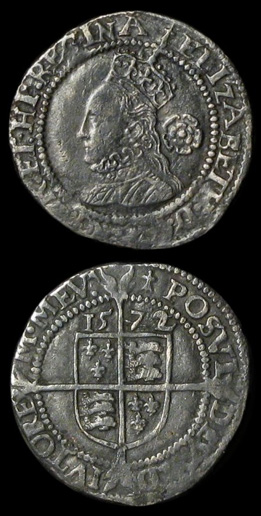 Elizabeth I (1558-1603) reintroduced the threepence, none having been minted by Mary / Mary and Philip (who had reverted to minting the groat or fourpence of previous times). Elizabeth's threepenny coins featured a rose behind the queen's portrait which assisted in distinguishing them from the groat and halfgroat, which were not too dissimilar in size. [2]

Elizabeth's moneyers also produced a milled threepence, as opposed to employing the traditional manufacturing technique of hammering. These new coins were evidently popular as a jewelry piece, as they are often found pierced or given a thin coating of gold. The coins were much thinner than modern coins, which often resulted in their being bent, which left a crease mark in the coin. [2]

From 1817 until the time of Victoria (1837-1901), the silver threepence was used predominantly as a Maundy coin. Under Victoria, the coin was again produced with general currency in mind and during Victoria's reign, Maundy and currency threepences used an identical design. The threepences of Victoria are reported to be scarce and challenging to collect in the higher grades of condition. [1]

The silver threepence had become unpopular as its small size meant that it was easily lost and fiddly to use. A chunky 12-sided brass threepence, much larger in size than the diminutive silver threepence, was introduced in 1937 and continued to be minted until 1970 and the advent of decimal coinage.

The silver threepence continued to be minted as a currency coin until 1945, coexistsing with the nickel brass threepence from 1937 onwards. The 1945 silver threepence is extremely rare and valuable, with only one or two said to have survived: Almost all of the c. 400,000 originally made were melted down.

The Maundy threepence has continued to the current day - and after 1947 was restored to the original standard of 925 silver.

The name of the threepence has been shortened in pronunciation in various ways, including "threppence", "thruppence" and "thruppny". The coin was also nicknamed the "ticky" in South Africa. [1]