The first twopence, known as the half groat, was issued by Edward III in 1351. It was very similar in appearance to the groat, but with half the weight and a correspondingly smaller diameter. The halfgroat / twopence was a popular and useful coin and was issued by all monarchs until the time of George III, from which time onwards it was minted solely for use as Maundy money. [1] 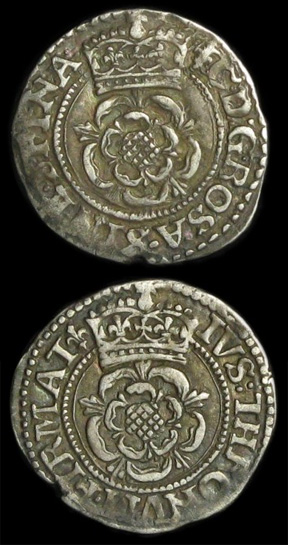 Half groats of the medieval period were consistent in design - featuring a portrait of the monarch on the obverse and a "long cross" extending to the edges of the coin on the reverse. From the introduction of the coin in 1351 through to the time of James I, the coin's design changed little. Then James introduced a half groat with a thistle on one side and rose on the other, omitting both roayl portrait and cross, and instead making a statement about the union of England and Scotland. The Half groat was continued by Charles I, Commonwealth and Charles II until the introduction of milled coinage.

Henry IV half groats are even more difficult to obtainthan those of Richard II. [2] These coins, as with other coins of Henry IV, are difficult to distinguish from those of Henry V and care must be taken to ensure that the coins have been correctly identified. [1]

The halfgroat of Edward V (1483) is noteworthy in that although it is thought that these coins were produced, none appear to have survived - or if so, have not been discovered.

Half groats of Henry VII and Henry VIII are more common and in general not too difficult to obtain. One notable exception is the "Tournai Mint" half groat of Henry VIII. This coin, thought to be unique in example, has the reverse legend CIVITAS TOURNAI and a mintmark of a crowned "T". Tournai was a city located in modern Belgium, that was conquered by Henry VIII in 1513. [3]

Half groats of Mary (1553-1554) were only struck in small numbers and are very rare now. Care should be taken as it is reported that very competent forgeries of this coin exist.

Many halfgroats were issued by Charles I. Some of those from the provincal mints are now extremely rare - including coins from Aberystwyth Furnace, Oxford, Bristol, "Plumes" mint, Exeter and Worcester. [1]

Milled silver twopences were introduced in the 1660's with the "undated" twopence of Charles II. The next coin came in 1668, two years before the appearance of the other denominations. The coins were continued in similar fashion until the time of George III, when a large copper twopence, known as the 'cartwheel' on account of its great size, was introduced. From around this time, the silver twopence was issued only as part of the "Maundy money" - a set of four silver coins of denomination one, two, three and four pence - which continue to be issued to this day, almost always in 925 silver but very occasionally in gold. The Maundy coins from 1921 to 1946 were issued in 500 silver.