Royal Canadian Mint silver bars are of course made by the world famous Royal Canadian Mint. As well as manufacturing silver bars, the RCM also manufactures (and is more famous for) its bullion coins and the Canadian coinage used in everyday circulation. The Royal Canadian Mint also creates bullion coins in gold, including special low-mintage collectors' coins and even offers a few items of jewellery - notably cufflinks and pendants featuring Canadian coins. The mint has even branched out into more innovative products, such as silver coins with gemstones set into them. [1] 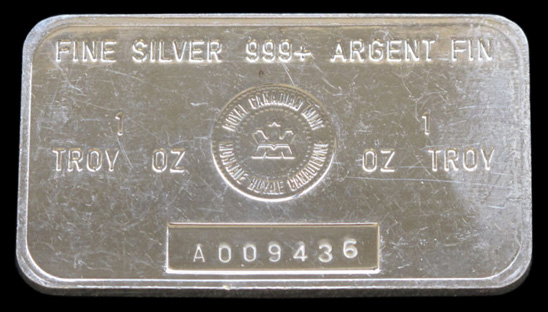 The mint has also made cast bars at a giant 850 troy ounces - equivalent to just over 58 (avoirdupois) pounds. These bars are unique in size and have some interesting features: The largest silver bar ordinarily made is the 1000 ounce bar, however owing to their weight, over 70 pounds, those are difficult to ship. The 850 ounce bars, owing to their size, have a significantly lower markup over spot than the more common 100 oz bars which are popular with investors. The RCM 850 oz bars have a variable weight typically between 800 and 900 ounces. This is reminiscent of the "London Good Delivery" gold bars which also vary in weight. In each case, however, you only pay for the actual weight of silver of course! The RCM 850 ounce bars are manufactured at a very high purity: .9995 - greater than the .999 silver bars ordinarily seen. [5]

The Mint first opened in 1908 and was effectively a Canadian branch of the London Royal Mint, Canada being a British Commonwealth country. Prior to that time, coinage that was used in Canada (since the creation of the Province in 1858) was manufactured by the Royal Mint in England. The first Canadian facility of the Royal Mint was in Ottawa.

In 1931, the Ottawa Mint negotiated independence from the British Royal Mint. It was renamed the Royal Canadian Mint and was at first a branch of the Department of Finance. In 1969, the Canadian government made the Mint into a Crown corporation, meaning that its owner / sole shareholder is the Government of Canada. The RCM runs "In anticipation of profit" and therefore runs without reliance on taxpayer funding to support its operation.

The Royal Canadian Mint has even experimented with new, modern currency innovations - for example the "MintChip" - a form of "virtual wallet" which provides a means of exchanging Canadian dollars by virtue of a digital chip transaction. [6]