Gold is universally considered a precious metal, and since time immemorial its inimitable luster, resistance to tarnishing, and extreme malleability have made it not only a great metal for currency, but a perfect medium for the arts and crafts that set the standards of an age. Because gold is a highly workable metal, it is capable of being made into extremely delicate threads, ground into fine powder, and even hammered into extremely thin sheets so delicate that it was said that sunlight could pass through it. This workability has made gold one of the primary media of decoration in nearly every culture, with a pinnacle for workmanship and mastery of the process of decorating with gold embodied in every culture that has ever laid master’s hands on the metal. 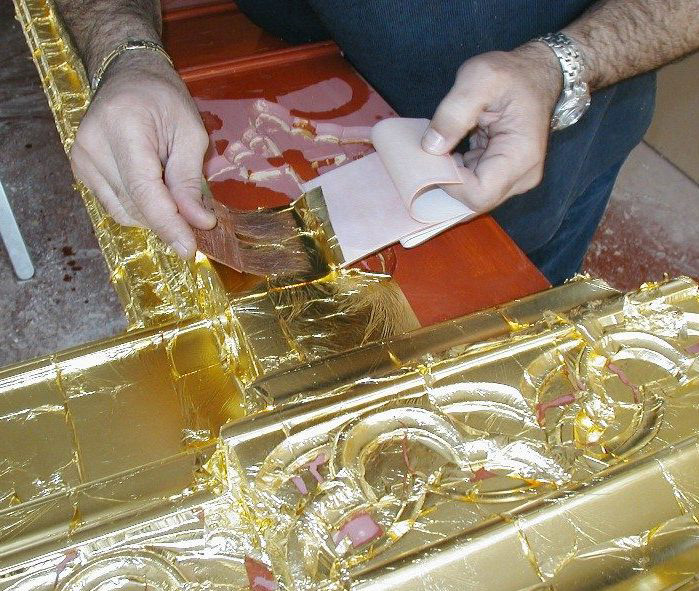 One of the finest examples of gold workmanship is gold leaf, a process by which extremely thin sheets of gold are hammered out to be used for gilding. Nowadays, gold leaf is commonly employed as a means to decorate stationeries and photo albums, but during the heyday of the Renaissance until the pinnacle of the 17th century, gold leaf gilding was used to decorate a variety of different materials, ranging from everyday items such as china and cutlery, to items such as books, writing implements and even food!

The process of gold leaf is one that has remained virtually unchanged since it was first employed by the ancient Phoenicians as a method to decorate furniture and funerary objects. The process of coating a base substance with gold in the form of thin sheets is referred to as gilding; however there are several methods of gilding that can be employed by an artist. This should not, however, be confused with electroplating, which is an entirely different process. While gold leaf was originally done by hammering thin sheets of gold unto the intended object, this process came to be a very troublesome method as it could not be applied to more delicate or fragile objects such as pottery or bone china. During the Tang Dynasty (607-907 BC) the process of gold leaf became more refined and was thus perfected. It no longer depended on annealed force to adhere the thin sheets of gold to the object that required gilding, but rather employed a type of adhesive that bound the sheets to the object semi-permanently. This was later adopted by the Italians and the French, so much so that during the Renaissance, the practice of gilding books and accoutrements of the church with gold or silver became very commonplace and was considered an outward sign of prestige and wealth.

The practice of gold leaf was not limited to the beautification of day-to-day objects however, as it was even employed to coat foodstuffs! Gold leaf is used in some Asiatic cultures and cuisines to coat food, and the very idea of the Golden Apples of Hesperides even suggested as such albeit symbolically. The use of gold leaf for foods and beverages became common in Venice during the latter part of the 17th century when Venice was then the Serenissima – the capital of its own world at the height of its powers. Today, gold leaf is still used as a means of decoration, although, with many metallic alternatives to gold nowadays, gold leaf is now reserved for the more ‘elite’ kind of furnishings and objets d’art.