Rome was once a small commune in the Mediterranean that later became one of the largest, most influential, and most powerful empires ever to arise in recorded history. The Romans conquered nearly the whole of the known world and placed into sovereignty such a vast number of territories that to this day, Rome's influence can still be observed in art, language, culture, customs, and even major concepts such as government and money.

However, for all of its richness, Rome's currency was a flawed system of monetary power that experienced extreme levels of inflation due to the petty squabbles in the inner workings of its government that made the Roman Republic, and later the Roman Empire fall into ashes. Still, for all of its confusion, Rome created standardized units of currency that became a staple throughout much of the ancient world, even going so far as being adopted, after a fashion, by more modern countries - with ramifications that remain to this day. 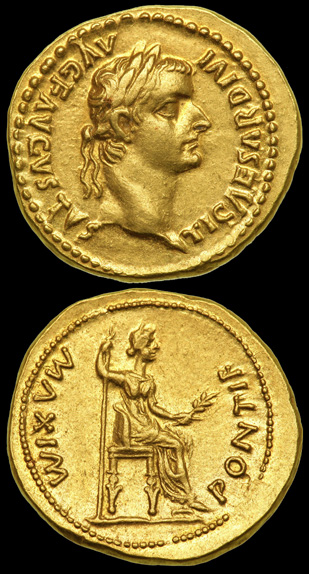 Despite silver being its main form of currency, Rome issued a number of gold coinages that were decidedly modern in form and creation. Rome's gold currency however remained legal and general tender solely in the Roman capital itself, while the rest of the Roman Empire had to make do with other forms of currency. [1] If a culture thought about gold in terms of wealth and money, it was Rome; whose wealth was intrinsically tied to the gold they possessed, and whose outward symbol of wealth and power was displayed in its currency.

Despite being infamous for the slowly deprecating value of its other currencies (due to debasement), Rome's gold currency remained strong, with evidence of the slow decline of Roman currency only evident in its silver coinage (the denarii). [2] One of the most notable and highly sought-after Roman gold coins is the aureus [3] (lit. 'golden', whence the elemental name for gold is derived) a coin which saw much use in Ancient Rome.

Issued from the 1st century B.C until the early part of the 4th century, the aureus was the then standard Roman gold coin expressly minted and used for international trade. Despite being in constant use, the aureus was infrequently struck, with the minting of aurei usually done to settle large payables or to integrate the wealth of plundered gold into the coffers of the nation. The aureus was the same size as a denarius coin and was once worth 25 denarii. By the time of Gaius Julius Caesar, the aureus was issued far more often, and with a standardized weight amounting to some eight grams. This standard would not remain a constant throughout the whole span of the Roman Empire however, as the weight of the aureus as well as the frequency of its production would continue to decline.

By the time of the later emperors of Rome, the aureus seems to have been minted and used solely for personal investments and accounts - in much the same way gold bullion is used today. Its weight drastically dropped from the original eight grams, down to seven by the time of Nero, and, by Carcalla's time, it dropped to an all-time lowest of 6.5 grams. [4] The purity of the aureus remained however and did not demarcate along with the rest of the Roman currency, so while the rest of Rome's monies dropped in value and lost whatever stretch of precious metal they once contained through debasement, the aureus remained strong. However, due to the exceedingly expensive worth of the metal used to mint aurei, the cost of one aureus began to equal a grand worth of 4,350 denarii – a colossal 4,325 denarii more than it was originally equated with. 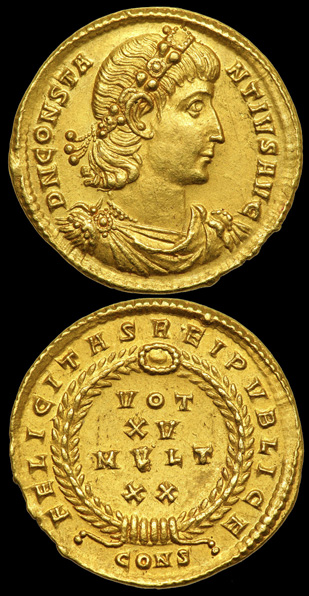 By the time of Constantine the Great, another Roman gold coin began to replace the aureus – the solidus (left). [5] While many smaller denominations of aurei were still in circulation such as the quinarius aureus and the tremissis [6] , it was Diocletian's solidi which were later reintroduced by the Christian emperor Constantine I as the official 'replacement' of the aureus and the new coin of the realm for the Empire of Rome proper as well as that of the Byzantine Empire. Constantine's switch to the solidus as Rome's official gold coin remains an enigma, as the worth of one solidi (4.5 grams of gold) was far beyond that of a common man's daily wage. It is believed that the solidus also acted somewhat like bullion currency, while some historians suggest that it was token payment for legionnaires and centurions, hence it being the origin of the modern world 'soldier'. [7] Antiquarians suggest that despite the presence of precious metals in Roman currency, they could not be considered officially bullion coinage due to the fact that their face value was higher than the precious metal they contained.

When Rome became the capital of Christendom, gold currency remained a strong political and economical source of power for the now spiritually inclined empire. The Papal States commissioned gold coins bearing their arms and images, or those of saints and memorable biblical scenes. Papal officials and even a notable number of popes were reported to have accumulated wealth in the form of gold coins and bars, and hid them in private treasuries. To this day, St. Peter's Seat – the Vatican – issues commemorative gold coins that are highly sought for by collectors and bullion investors alike. [8]

Since the earliest period of the Roman Empire their currency had decidedly modern features which would in fact inspire much of the kingdoms which were offshoots of Fallen Rome to aspire for a government or a power equal to that of Rome, but to copy much of its monetary standards and designs as well. Roman currency is well known for its copious use of the busts of its rulers for its face, although this evolution took time in the happening. The name of a majority of the world's currencies today still carries echoes of Roman coins, and our value of gold as a monetary commodity is also a remnant of a bygone empire whose ghosts still haunt the waking footsteps of the modern day. Gold coins of both ancient and modern make are still valuable commodities sought for by numismatists for their rarity and historical value, and for investors of gold bullion for their intrinsic and historical worth.