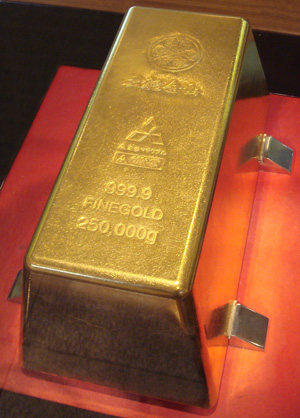 What is it about gold bricks? Obviously, the first thing is that they are extremely valuable! But gold has a timeless allure and fascination over humans that goes back to ancient times. It's almost as if the substance of gold itself has some strange mystical quality that attracts and incites powerful desire - most particularly the desire to own and guard it!

My first experience of seeing gold bars was probably the same as most peoples: The movies. It was the original "Italian Job" movie from the 1960's - which featured a plot that was focused on a complicated heist involving the theft of a large hoard of gold bricks from Turin, Italy. The thieves, in specially customized cars designed to handle the extra weight of the gold, led the cops on a wild chase which finally ended up with their getaway bus hanging over the edge of a cliff, high on a mountain pass in the Alps. The stack of gold bricks was, unfortunately, at the end of the bus which was dangling over the void; the crooks were at the other end, their weight the only thing preventing the bus from slipping into the abyss. None of them could get off the bus - truly "possessed by their possessions" and trapped by their greed in a perfect predicament that was left unsolved.

The gold bars in that movie were the classic "Good Delivery" 400 ounce gold bars that are held by central banks and governments as official gold reserves.

Most people have only seen gold bricks in movies. A few have seen them in museums or have even caressed or held them briefly. An even smaller minority own them - and of these, most are probably kept out of sight in high security vaults and banks most of the time - perhaps only being inspected (and gloated over) once in a while. Isn't it ironic that the majority of gold bricks, despite their lovely golden color, spend most of their time unseen? 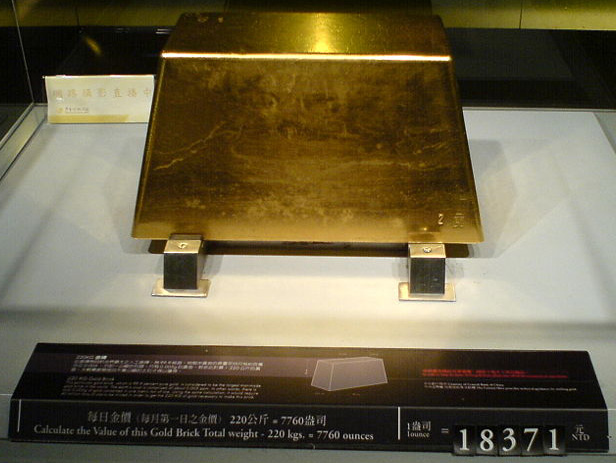 Another monster 220kg gold brick in a museum. That's 7760 ounces - worth well over $10 million.
You would have a hard time running off with it though - it weighs nearly a quarter of a ton. 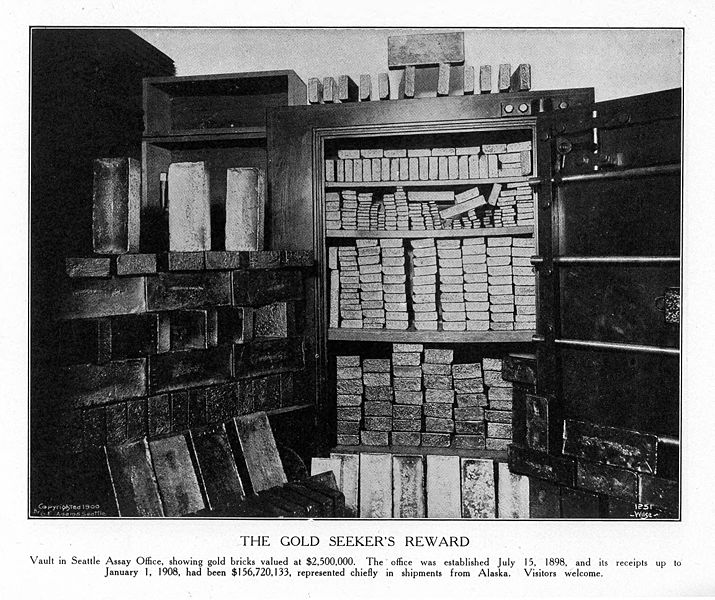 Above: Gold bricks - and old black and white image from the beginning of the 20th century.

The largest gold brick in the world weighs 250kg (551lb) and is on display at the Toi Gold Mine in the Shizuoka Prefecture of Japan. It measures 45.5 cm x 22.5 cm x 17 cm and is currently worth around $15 million. It was poured on June 11, 2005 by the Mitsubishi Materials Corporation of Japan and is verified by the Guinness Book of Records as the "world's largest manufactured gold bar". This gold brick was never intended as an item for trade: It was created as a symbol of prestige. Gold bricks intended for financial transactions have to be of reasonable size so as to be readily movable.

It’s easy to understand why gold makes the perfect commodity – it is incredibly durable, attractive, divisible – and scarce enough. But if you take a step back and think about it - isn’t it curious how human beings put so much value on an item that you cannot eat, drink, breathe or use to keep warm? If you were dying of thirst you would trade your gold brick for a glass of water... so, which is more valuable? Perhaps, like crows, humans are simply spellbound by shiny objects - or maybe the precious metals do have some mystical alchemical quality. Who knows?