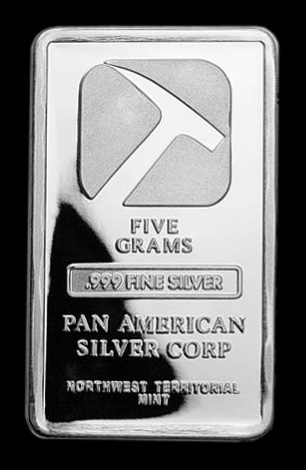 The bars are all minted at .999 purity and feature the same "silver hammer" logo, as seen in the image. [5]

Pan American also has "silver rounds" in one and half ounce sizes, and has even produced as "silver bar necklace" - featuring a 1 /4 ounce bar set into a pendant and suspended from a silver chain.

The area in which La Colorada mine is found has been a center of mining ever since the 16th century; however silver production was sporadic for a long time and did not become continuous until the 19th century. Mining has been ongoing since that time, with the exception of the time of the War of Independence, which brought a halt to mining between 19190 and 1920. La Colorada mine is in an area which has been nicknamed the "Faja de Plata" - the "silver belt" - a silver deposit that stretches some 800km along the Sierra Madre Occidental mountain range of the west coast of Mexico. [6]

La Colorada mine is a polymetallic mine and also produces zinc, lead and a few thousand ounces of gold. [6]

As Pan American silver bars are in current production, availability is good and the bars can readily be seen for sale online from bullion dealers and on Ebay.

Silver bullion has great appeal to investors who prefer to take direct possession of their assets. One of the potential advantages of this, in addition to being able to see the actual, tangible asset, is that silver is in general considered a liquid commodity - easy to exchange for its cash equivalent.