The first half crown was minted in 1526, during the reign of Henry VIII. This coin however was not struck in silver, but in gold. Gold half crowns continued to be minted throughout Henry's reign, through the "posthumous" and "first to third periods" of Edward VI's reign (1547-1553), by Elizabeth I (1558-1603) and by James I (1603-1625). However silver half crowns were also produced by Edward VI, and from that point until the last gold crowns of James I, both silver and gold half crowns were concurrent. This page will address the silver half crowns.

The value of the half crown was set at two shillings and sixpence, commonly known as "two and six" and remained at this value until the last half crowns were made, in 1970. 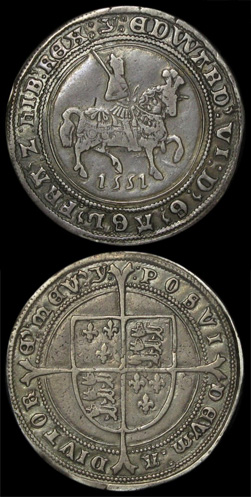 THe first silver half crowns were produced by Edward VI in his "fine silver" issue of 1551-1553. This coin, much larger than the gold half crown, depicted the "boy king" on horseback on the obverse, with a long cross and shield design on the reverse. The coin was very similar in design to the silver crown of the same period. Three varieties of the Edward VI half crown were issused: The first features the horse walking and a plume on the horse's head, with the mint mark "Y" (see image) and the date 1551. On the second, the horse is galloping and bears no plume. The mint mark is the "tun" and the date either 1551 or 1552. On the third, the horse is larger, again walking and the date is 1553. [1]

Elizabeth I Half Crowns

No half crowns were produced by Mary or Mary / Philip, and most of the half crowns produced by Elizabeth I were struck in gold. However, during the last years of her reign, Elizabeth's moneyers produced large quantities of silver half crowns. As with the crown, these bear no date, but the mint mark of either "1" or "2" denotes the year of either 1601 or 1602. The half crowns with the "2" mintmark are extremely rare, only around a dozen being known to exist. [1] 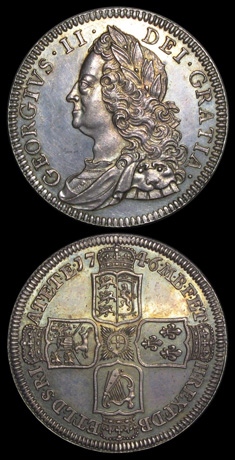 Charles I Half Crowns

Half crowns were produced in both silver and gold by James I. Under Charles, half crowns were only minted in silver. Almost all of these issues continued to feature the king on horseback on the obverse, including coins minted at both Tower and provincial mints. As with other coins of Charles I, the half crowns are a complex series, with many varieties produced at the numerous mints around the country.

Worthy of mention are the curious "siege issue" half crowns - made from pieces of silver plate, cut crudely to shapes such as lozenges and stamped with royal symbols such as a crown or castle. These "coins", if they can be called coins, reflect clearly the historical situation at the time: The king was under siege and forced to create money however he could in order to pay his soldiers and other expenses.

Shortly after the restoration, in 1663, the first machine-made half crowns were introduced under Charles II. This series is again rather complex, with issues every year from 1663 to 1684 except 1665 (the year of the plague), and numerous varieties. From 1667 onwards the regnal year is written on the edge of the coin in words, and in a surprising number of cases there are lettering errors. In general Charles II half crowns were well used and thus typically subject to much wear and tear. They are difficult to find in higher grades, prices reflecting this.

Milled half crowns continued to be produced regularly right through to 1970, when the last coins were made prior to decimalisation. After the Great Recoinage of 1816, the size and weight of the coins was standardized to 32 mm diameter and 14.1 grams weight.

As with the crowns, the silver half crown series is complex, with so many variations and subtleties that to specialize in just the one denomination gives plenty of challenges to the collector. There are many further options - for example to choose the coins of one monarch or century, or even to collect a variety - such as plain edge proofs, of which there are many, especially in the 19th century (this would however require deep pockets as these coins are typically rare and expensive). Here is a list of plain edge proof half crowns: [1]