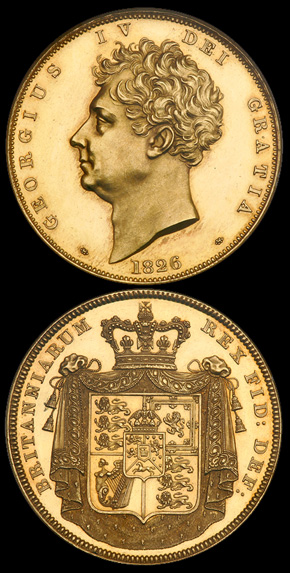 The five pound coin is a denomination that "officially" first started with the 100 shilling five guinea of Charles II. However the value of the guinea fluctuated over time; also the guinea coins from before the Great Recoinage of 1816 had a different look and feel - so the five guinea coin is generally considered a separate series by collectors. [1]

The first appearance of the five pound coin was at the end of the reign of George III, when it was produced in 1820. (S.3783) The obverse shows the right-facing bust of George III with the legend GEORGIUS III D. G. BRITANNIAR. REX F.D. and the date. The reverse shows the now famous St. George and dragon design of Benedetto Pistrucci (1784-1855) with no legend.

This coin exists in two versions: one with the edge inscribed and one with plain edge. Both are considered "pattern only" proof coins and are extremely rare and valuable, being listed for £70,000 and £85,000 respectively in FDC condition. [2]

The next five pound coin was an 1826 proof of William IV (S.3797; see image left). It is estimated that fewer than 200 of these coins exist and many were included in an 11-piece "proof set" for that year, in which they are usually found. Examples may realize $15,000 at auction in or close to FDC condition. The 1826 coin features either plain edge or the edge inscription DECUS ET TUTAMEN ANNO REGNI SEPTIMO. There is also a Piedfort ("heavy foot") proof version of this coin, weighing 46.5 grams instead of the regular 39.8-40.0 grams. This coin has plain edge and is thought "probably unique".

The William IV five pound gold coin was also produced in 1829. Only one example exists, 38.7 grams with plain edge; a proof or a pattern.

The next time the gold five pound coin appears was in the reign of Victoria (1837-1901). In 1839 a gold five pound was issued, and this coin has acquired cult status among collectors rivalled only by a few coins such as the 1847 gothic crown. The 1839 coin is known as the "Una and the Lion" coin. Una and the Lion are characters in Spenser's The Faerie Queene and appear on the reverse. 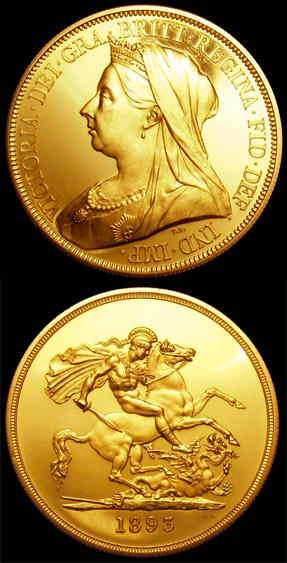 The obverse shows the Victoria "young head", facing left with the legend VICTORIA D G BRITANNIARUM REGINA F D, while the reverse shows Queen Victoria as Una leading the lion, with the inscription DIRIGE DEUS GRESSUS MEOS – "May the Lord direct my steps". Some coins say DIRIGIT instead of DIRIGE – "The Lord directs my steps" – with the date MDCCCXXXIX in Latin beneath the lion. The edge may either have the inscription DECUS ET TUTAMEN ANNO REGNI TERTIO, in large or small lettering, or be plain. The coin weighs 38.7–39.3 grams.

The next issue of the five pound coin was in 1887, celebrating the queen's Jubilee. This coin weighed 40 grams, features milled edging and has Pistrucci's George and the Dragon on the reverse. A rare and extremely valuable "Sydney Mint" proof of this coin exists, with the "S" mintmark appearing above the center of the date. [1]

The old head coin (see image left) features milled edges and the reverse of George and the Dragon.

Collectors are advised to exercise caution as very good forgeries of the 1887 and 1893 coins are known to exist. The fake coins may have the correct weight, but may have a weak strike or "too new" a look. [1]

In the reigns of Edward VII, George V, Edward VIII, and George VI, the gold five pound coin was only issued in proof sets in the first year of the King's reign. All these coins used Pistrucci's George and the Dragon on the reverse. The 1902 Edward VII coin was also issued as a "matt proof" and also minted at Sydney, being identified by an "S" above the centre of the date. The 1902 Edward VII, 1911 George V and 1937 Edward VIII coins had milled edges. The Edward VIII coin was prepared as a pattern only in very small quantity and no proof sets were issued. This coin is listed as having a value of £175,000.

A gold five pound coin was issued in 1937 as part of a four-coin cased proof set to celebrate the coronation of George VI. These coins featured a plain edge, which is often seen damaged in examples, owing to the difficulty in prising these coins from their original mounting. [1]

A very small number of gold five pound pieces were minted in 1953 and again in 1957, but neither of these pattern / proof strikings were released to the public, with the result that they are extremely rare and now valued in six figures. These coins again featured the reverse of George and the Dragon by Pistrucci.

The gold five pound coin was not issued again until 1980 - and since then the Royal Mint has been releasing them both individually and as part of proof sets. These coins make up two series: The traditional style, featuring the reverse of St. George and the Dragon, which has been released most years - and the "commemorative" style with unique artwork and a design celebrating a date of Royal significance. In addition to 22 carat gold, the commemorative coins were also issued in cupro-nickel and sometimes also in silver, in much higher quantities and since 1990 these five pound coins have been called crowns being the same size as the old five shilling crown.

Below is a table of the commemorative gold five pound coins. (George and Dragon traditional style coins are not included in this list)