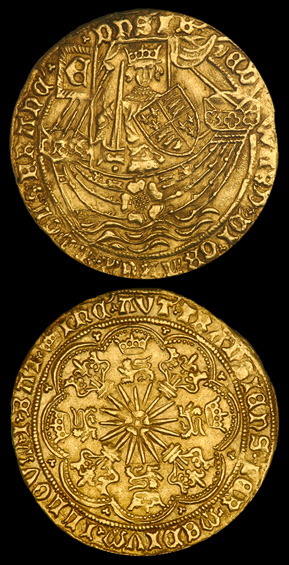 The gold ryal, also known as the rose noble, was an English gold coin first issued in 1464, during the "first reign" of Edward IV (1461-1470). Issued sporadically until the time of James I, the ryal represents one of the more scarce and challenging series of english coins for the serious collector; requiring deep pockets and patience to make significant headway.

From the 1430s onwards, the price of gold had been rising, with the result that the gold noble, which had been in use since 1344, was worth more on the continent than in England. The nobles were exported en masse to the continent for profit, resulting in a shortage of the coins.

In an attempt to prevent export and melting down of the english gold coin, Edward IV raised the face value of the noble to 8 shillings and fourpence in 1464 and introduced a new coin - the Rose Noble or Ryal (Spink 1950-1958) which was worth ten shillings and had a weight of 120 grains. From 1464 to 1470 large quantities of these ryals were produced at the London mint, as well as the provincial mints of Bristol, Coventry, Norwich and York. Ryals from the various mints are identified by letters "in the waves" below the king's ship on the obverse. The London mint has no letter, Bristol has "B", Coventry "C", Norwich "N" and York "E". Edward IV also issued a half ryal (S.1959-1963A) and quarter ryal (S. 1964-1966).

At first lance the ryal of Edward IV looks quite similar in design to the noble - however a rose appears on the king's ship - hence the name "rose noble". The reverse design is also fairly similar to the noble, but slightly different in details such as the sun's rays and the size of the elements.

This first-generation Ryal did not last long - it was only minted until 1470, when it was superseded by the Gold Angel. Ryals of Edward IV are said to be "scarce, but obtainable", however the coins from the provincial mints, especially Norwich and Coventry, are much more rare. [1]

Henry VII (1485-1509) reintroduced the ryal in 1487 - however his coin (S.2178) featured a tudor rose on the reverse with a French shield over it. The coin was again unpopular and produced in small quantities. Ryals of Henry VII are extremely rare and valuable nowadays, likely to fetch five figure sums at auction. [1] No half or quarter ryals were produced under Henry VII, nor by any subsequent monarch (although the spur ryal of James I (see below) could be seen as a half ryal as it had half the face value.

Queen Mary (1553-1554) issued a ryal, valued at 15 shillings (S.2489) however these coins too are extremely rare and difficult to obtain, fetching five figure sums on the rare occasions they appear at auction. [1] One example is mentioned by John Laskey as dated 1555 and being in the Hunterian Museum, Glasgow in 1813. [3]

Elizabeth I also issued a ryal of fifteen shillings (S.2530) between 1584 and 1589. This is said by Coincraft to be particularly sought after as it is agreed to be the last medieval English coin. Again, this coin is extremely rare and examples can fetch five figure sums at auction. 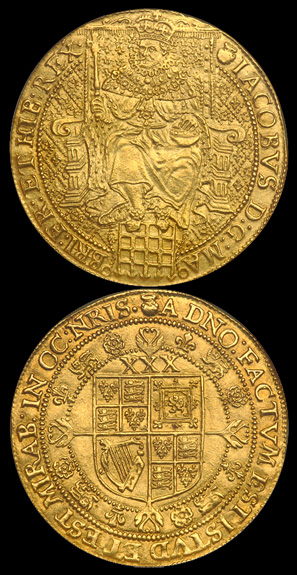 James I (1603-1625) did not issue any ryals in his first coinage (1603-4), but issued a new type of ryal with his second coinage (1604-19) - a Rose Ryal of thirty shillings (S.2613). This spectacular coin was over an inch and a half in diameter and featured the king in his royal robes, enthroned with scepter and orb on the obverse, and a large shield-on-rose design on the reverse. The coin could be seen as a development of the fine sovereign of Elizabeth I. Above the shield, the latin numeral "XXX" denotes the value of thirty shillings. The face value of this coin was increased to 33 shillings in 1612. [2]

With the third coinage (1619-25), James again issued a rose ryal (S.2632) - however this coin was valued back at thirty shillings and weighed 196.5 grains. It featured a new royal portrait on the obverse and a new design of a large shield on the reverse (see image to the left). These coins are also rare.

In his second coinage James I also issued a spur ryal of fifteen shillings (S.2614). This coin was so named because the rays emanating from the sun and rose at the center of the reverse, give the appearance of a rider's spur. The spur ryal continued the tradition of the king within his ship on the obverse. The value of the spur ryal was raised in 1612 alongside the rose ryal - to 16 shillings and sixpence. [1]

With the third coinage, a new design of spur ryal was created (S.2634). This design, curiously, did away with the royal portrait on the obverse and featured a lion holding the scepter above the royal shield, and the latin numeral "XV" to denote the value of 15s.

Thus ended the series of coins known as the ryal. Most of the ryals are uncommon at best; some are extremely rare and valuable. Collectors are reminded to exercise caution as forgeries are known to exist, some very competent and requiring an expert numismatist to distinguish from the real thing.