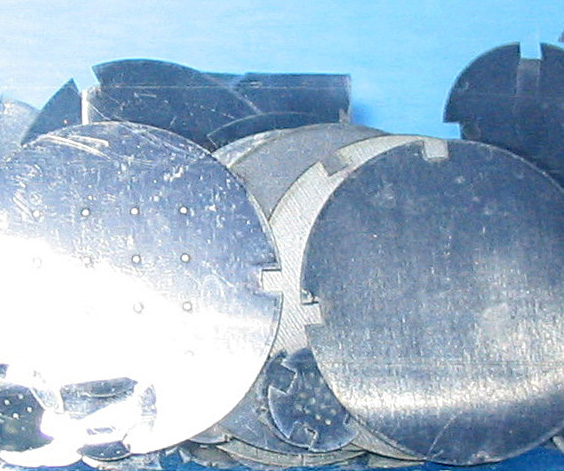 Beryllium is an silvery-white, lustrous alkaline earth metal. It is element no. 4 in the periodic table and has the chemical symbol Be. It is an uncommon element and has no known biological role. Beryllium is noted for high toxicity when in the form of beryllium dusts - and for this reason beryllium has long since been phased out of some applications. [1]

Beryllium is found in a number of minerals, including beryls, the gemstone family of which aquamarine and emerald are members. Beryllium was first discovered in 1798 by Louis Nicolas Vauquelin, who extracted it from emerald, finally producing beryllium by the reduction of beryllium chloride with potassium, which has higher reactivity. [2] However it was not until 1898 that significant samples of pure beryllium were able to be produced, when Paul Lebeau was able to perform electrolysis on a mixture of beryllium fluoride and sodium fluoride. Large scale production did not commence until the 1930s. [1]

Beryllium has some unique characteristics that make it a valuable and in some instances critical resource. By weight it is six times more rigid than steel, and has only two-thirds the density of aluminium. It is one of the very lightest metals. [3]

Some other beryllium-containing minerals include Barylite, Bertrandite, Beryllonite, Chrysoberyl, Danalite, Eudidymite, Halvite, Herderite and Phenakite. The USA has significant beryllium resources and the deposit at Spor Mountain in Utah is considered the most significant in the world. (2006) Beryllium is also produced in Canada, Brazil, Russia, Kazakhstan, Greenland and Australia. [3]

Global beryllium demand has been predicted by Global Industry Analysts to reach 465 metric tons by the year 2015. [6]

Beryllium has a range of uses. Owing to its lightness, stiffness, stability and other structural qualities, beryllium is used for high quality structural aerospace materials, including supersonic aircraft, missiles, spacecraft and satellite technology. It is also used for the nozzles of liquid-fuel rockets. [1]

Beryllium can be added to copper or nickel alloys to improve their strength, heat / electrical conductivity, and improve their elasticity. Beryllium-copper alloys contain up to 2% beryllium. These alloys have uses in the manufacture of springs, spark-proof tools, electrical contacts and spot welding electrodes. [1] [2]

Owing to its rigidity and stability, Beryllium is used in precision instrumentation such as gyroscope-based inertial navigation systems. [1]

Beryllium mirrors have a number of uses, including sturdy, light, large-area mirrors for satellites. Smaller beryllium mirrors have found use in precision optics, such as those for telescopes, guidance and weapons systems. Beryllium finds itself of much use to defense industries and is used in numerous systems including targeting and countermeasures. [3] Beryllium also has use in nuclear weapons technologies. [1]

Beryllium is better in environments of extreme cold than glass owing to lower thermal expansion coefficients, and so is more ideal in scenarios of extreme temperature variation, such as space telescopes. Some space telescope optical systems are made entirely from beryllium instead of glass.[1]

Beryllium is used in electronics. It is used in structural support for electronic components, as a dopant in certain semiconductors, and as a heatsink. Beryllium is well suited in this regard as beryllium materials have thermal expansion coefficients that can be fine-tuned to match other materials. [1] Thermal expansion mismatch of different materials which are attached to each other is a well-known source of component failure; electronic components must be able to withstand repeated heating and cooling of a component, as this can happen in electronics every time the device is switched on or off. [1]

Beryllium is transparent to x-rays and so ultra-thin beryllium foils are used as "transmission windows" in CAT scanning and other medical x-ray devices. [3]

Beryllium oxide is also used to make ceramics which are used in laser and other electronics applications. [3]

Beryllium was once used in the brakes for military aircraft due to its hardness, high heat dissipation and high melting point. However due to the creation of toxic dust, which was an environmental and health hazard, this was discontinued. [1]