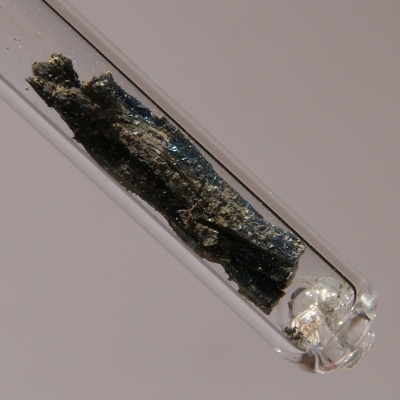 Europium is a moderately hard, silvery-colored metal. It is element number 63 in the periodic table and has the symbol Eu. It is the most reactive of the lanthanide series of elements (elements 57-71). It is flammable and may spontaneously ignite, so must be stored under oil. It reacts with water in a similar manner to calcium. [1]

Naturally-occurring europium is made up of two isotopes: 151 Eu and 153 Eu. 153 Eu is a stable isotope, however 151 Eu decays very slowly, giving off alpha particles. It has been estimated that it would take a billion times the lifetime of the universe for 151 Eu to decay as a kilogram of material emits one alpha particle approximately every two minutes! [1]

Europium was observed by Paul Émile Lecoq de Boisbaudran in 1890, who noted unaccounted-for spectral lines in rare earth concentrates. However it was Eugène-Anatole Demarçay who first isolated a europium salt in 1901. As is typical for the lanthanides, it was not for many years that a pure sample of the metal was obtained. As might be expected, it was named after the continent of Europe. It has been said by others that Sir William Crookeshad also noticed the spectral line of europium in a ytterbium / samarium sample in the late 1880s. [1] [2]

Europium is unusual among lanthanides in that it forms divalent compounds; either in the +2 or +3 state. Most of the lanthanides react with a +3 oxidation state only. Cutting a long story short, what this means in practical terms is that europium is easier to extract and purify than other rare earth elements; however it is often in lower abundance than would be expected by theory, owing to what is called the "negative europium anomaly". [1]

The most important sources of europium are the minerals monazite and bastnasite, with bastnasite being the most significant source. Europium is also found in the mineral xenotime. Monazite contains radioactive isotopes. Europium is extracted from the minerals by the same multi-stage process that is used to prepare other rare earth elements. The principal sources of bastnasite are the Mountain Pass rare earth mine in California, and Bayan Obo in China. [1]

Contrary to some statements, europium has a number of commercial uses - most of which utilize its unique luminescent behavior. It has use in both red and blue phosphors The most well known use of europium is probably as the red phosphor in color televisions (cathode ray tube). Europium-doped yttrium orthovanadate provided a brilliant red color for the first time - and europium has been used in the cathode ray tube ever since. Europium is also used in flat screen monitors. [1] [3]

Europium is also used in fluorescent lightbulbs and fluorescent glass [1] and in alloys - however it seems that europium alloys are mostly in the research field and have not found major commercial use. Perhaps this is because europium has similar qualities to some other rare earth elements, but is more expensive?

Many of the rare earth elements are luminescent, producing sharp bands of color after being excited by light of a certain (other) wavelength. Euro banknotes, like other banknotes, include several anti-forgery technologies. One of these is that they luminesce red, green and blue when under UV light. It has been suggested that phosphors made from europium complexes are being used at least for the red color, which may not be achievable any other way. [4]

Europium absorbs neutrons well, and so its oxide was at one time used for control rods in nuclear reactors in Russia. [5]

Europium is used as a dopant for many materials, including yttrium oxide, gallium nitride, strontium aluminate, zinc / aluminium double hydroxides and monoclinic gadolinium oxide. Current research is focusing on enhancing the luminescence and colors of the materials. [7] [8] Rare earth doping involves thin-film deposition of ions onto a substrate and can be achieved in a number of ways - such as sputtering, molecular beam epitaxy, metal organic chemical vapor deposition.[8] [9] [10] Doping is an essential process in the creation of the active medium for solid-state lasers. [11]

Europium has recently been found to be a superconductor - although it must be cooled to 1.8 K and put under 790,000 atmospheres of pressure to do so. [13]

Europium arsenide has use as a semiconductor and in photo optics. [14]

Europium oxide is also used in glass and ceramics. Europium selenide is used in infrared detection and imaging. [16]