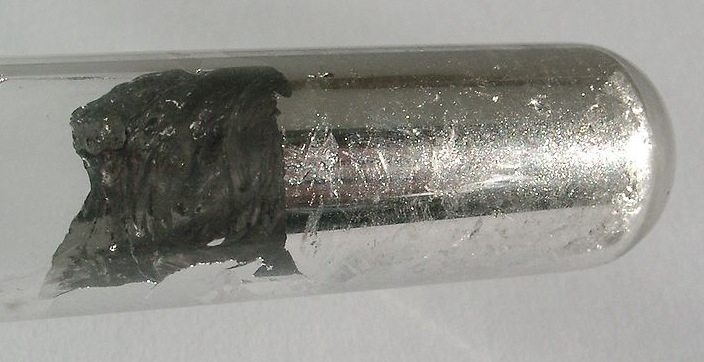 Indium is a rare element in the earth's crust but is around 3 times more abundant than silver. The majority of new indium entering the marketplace is that made as a byproduct of electrolytic zinc refining - although some also comes as a byproduct of tin refining. [1]

Indium was first noticed in 1863 by German scientists Ferdinand Reich and Hieronymous Theodor Richter, who were dissolving minerals in hydrochloric acid in order to search for the element thallium by use of spectroscopy. In one experiment, instead of seeing the green spectroscopic line of thallium, a blue line was seen that did not correspond to any known element. The element was isolated in 1864 and named after the indigo color seen in the experiment that led to its discovery. [1]

Indium is not found as a primary mineral but is produced as a byproduct of zinc and other metal processing. Significant producers of indium are China, Canada and Bolivia. [1]

Consumption almost doubled between 1900 and 2000, almost doubled again between 2001 and 2005 but has "leveled off" between 2005 and 2009 - and significant improvements in indium recycling in the last few years have also helped balance supply and demand. [1] This is reflected in the explosive price increases in the early 2000's, followed by falling prices in the last five years.

Indium is considered to be one of the important critical metals with many applications, and has the best performance of any material in some categories. Much of the indium in current use (around 65%) is used for thin-film technologies - in particular for liquid crystal display (LCD) screens - and indium consumption is largely dictated by the volume of LCD production. High purity indium phosphide is also used in semiconductors [1]

Indium is also used in LEDs (light emitting diodes) - in particular blue and violet colors - and demand for LED technology seems likely to continue to grow, due to its significant advantages as a lighting technology (high efficiency, long lifetime, low heat generation, high physical durability). However alternate materials do exist for LED technologies, meaning that although LED use is likely to grow strongly, it is difficult to predict the demand for indium in this application. [2]

Indium is used in cell phone technology as an essential component, alongside critical components made with titanium and tantalum. [3]

Indium is also used thin-film solar panel technology. Together with gallium, selenium and copper it is used to make photovoltaic devices commonly known as CIGS. [4] Another type of thin-film solar cell is made from Cadmium Telluride (CdTe). Thin film cells currently have around 15% market share in solar panels [5]

However, there are several other materials that can be used to make solar panels, including crystalline silicon, which has about 85% of the market share. But as this is an area of technology with a high demand and focus, new technologies are likely to evolve in the next few years. This may cause instability in indium prices and again, it is highly uncertain whether demand will rise or fall.