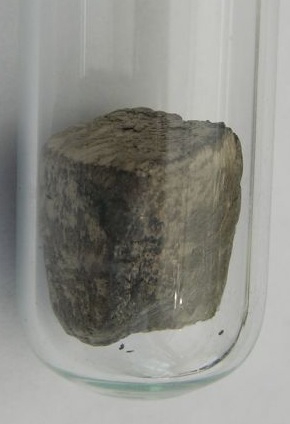 Cerium is a soft, silvery, ductile metal. It is element number 58 in the periodic table and has the symbol Ce [1] . It was first discovered in around 1800 in minerals containing other lanthanides - however unlike other lanthanides, its oxide is insoluble - meaning that this oxide was able to be separated from other lanthanides in 1803 by Jöns Jakob Berzelius. Cerium oxide was also produced by Martin Klaproth at around the same time.

Cerium oxide is very stable and the pure metal was not obtained until 70 years later, when electrolysis of molten cerium chloride was performed. [2] Cerium was named after the asteroid Ceres, which had been discovered in 1801 and in turn took its name from the Roman Goddess of agriculture. [3]

Cerium is a reactive metal, especially in powdered form and is one of the most reactive of the rare earth elements. It reacts with water to form cerium hydroxide and hydrogen. Pure cerium burns at 150ºC and can ignite if scratched with a knife (which exposes an unoxidised surface.) It has a melting point of 798ºC. Naturally occurring cerium has four stable isotopes, of which the most abundant isotope is 140 Ce, which forms 88.5% of the naturally-occurring element. [1]

Cerium is the most common of the lanthanides (elements 57-71) and is more abundant in the earth's crust than lithium, neodymium, lead, tin, boron, silver and many others. Annual cerium production is around 24,000 tons and large deposits have been found in India, Brazil and the USA. [4] The main sources for cerium are the minerals allanite, bastnasite and monazite. It is also found in the minerals hydroxylbastnasite, rhabdophane, zircon and synchysite. [1]

Cerium is made commercially by a multi stage process which is also used to extract other rare earth elements. First lanthanide-bearing minerals are crushed and powdered, then treated with hot sulphuric acid to form mineral salts in solution. After further treatment with sodium hydroxide, then ammonium oxalate, the remaining mineral oxalates are treated by annealing to produce oxides. Nitric acid dissolves all the other oxides except cerium oxide. Pure cerium can be made either by electrolysis of molten cerium chloride or by reduction of the chloride using calcium.


One of the most
important books
on Critical Metals

Cerium has numerous uses and commercial applications. Cerium oxide is used by the automobile industry as a catalytic convertor - in honeycomb form it can help combust unburnt fuel in exhaust systems. Also, in nanopowder form it is added to diesel fuel, which assists in clean combustion. [2]

Cerium(IV) oxide is also used as a catalyst in self-cleaning ovens and in petroleum refining. [1]

Cerium is the major ingredient in misch metal; prepared from the mineral monazite. Misch metal forms the "active ingredient" in flints used in lighters - however on its own it would be too soft, and so is added to iron oxide and magnesium oxide in order to form ferrocerium. Historically, mischmetal was around 50% cerium with lanthanum (25%), neodymium (17%), praseodymium (5%) and the rest made up by other lanthanides. However, owing to the high demand for neodymium and praseodymium for other uses, it is more profitable nowadays to remove these elements for separate sale. [5]

Cerium oxide is used in precision polishing of optical components. Cerium compounds are also used in enamels and glass making. [1]

Cerium oxide is also used in incandescent gas mantles. Combined with other oxides such as lanthanum, magnesium, yttrium or thorium, these glow brightly in the visible spectrum when heated, with less infrared light than the flame would ordinarily emit - so they produce more useful light. The use of thorium as a mantle material is controversial as it is radioactive and particles may escape into the air over time. [6]

Cerium is added to steels and other alloys. In steels it can help reduce oxide and sulphide impurities, and it adds malleability to cast iron. It is added to magnesium alloys together with small amounts of zirconium to assist with casting. [1]

Cerium is an essential component in cathode ray tubes and fluorescent lamps, and is used in carbon-arc lighting in the motion picture industry. [1]