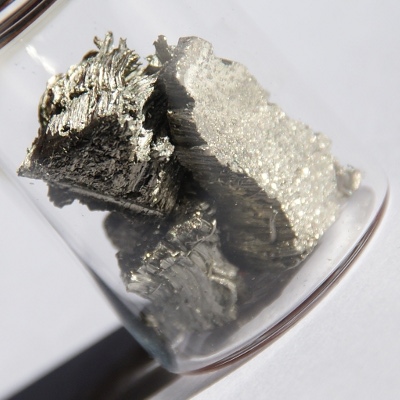 Scandium is a silvery-white colored rare earth metal with low density. It is found in the minerals gadolinite, euxenite, kolbeckite and thortveitite, as well as in small amounts in several other minerals. It is element number 21 in the periodic table and has the chemical symbol Sc [1]

Scandium was first observed by Lars Fredrik Nilson in the minerals euxenite and gadolinite in 1879. Nilson was able to prepare scandium oxide, which he named scandia, after Scandinavia. However it was not until 1937 that scandium metal was produced for the first time, by a high temperature electrolysis process. Scandium had been predicted by Mendeleev, who had named it "ekaboron" in reference to the fact that it would have some qualities similar to boron. [1] [2]

Around 2 tonnes of scandium oxide is produced globally per year. Much of this is not from new mining but comes from Russian Cold War stockpiles. In 2003 there were only three mines producing scandium: Two were in Russia, the other in China. Scandium is seldom found in high concentration in nature, and in all the above three mines, scandium oxide is a by-product of other mineral mining and extraction. [1]

Scandium is also available from numerous other sources, but production is not always developed from them. The NORNICO project of Queensland, Australia is proposed to commence production of scandium oxide in 2013-2014. Uranium deposits in Kazakhstan and Russia also hold scandium. The highest concentrations of scandium occur in thortveitite and kolbeckite from Norway and Madagascar. [1] Fluorite tailings from Crystal Mountain, Montana, USA also contain thortveitite. Undiscovered scandium resources are thought to be substantial. Scandium has not been produced in the USA from mine tailings since 1990. [3]

The market for scandium is small and supply is abundant compared to demand. [3] The most significant use for scandium is in aluminium alloys. Small amounts of scandium (0.1%-0.5%) are added to aluminium to improve crystallization parameters in welded aluminium components. Aluminium-scandium alloys have increased strength and have some use in aerospace. They were used in Russian the MiG-21 and MiG-29 fighter jets and some missiles, however titanium alloys are generally considered to be a more cost effective solution with similar performance. [1]

Some sports equipment has been made with scandium alloys - including racing bicycle parts, baseball bats, golf clubs and lacrosse sticks. Some revolver frames are made using scandium alloys. [1]

Scandium iodide is used in small quantities together with sodium iodide in mercury vapor lamps and it assists in creating a light spectrum close to that of sunlight. These lamps have a number of uses including stadium floodlights and night-time filming - and around 80kg of scandium is used globally per annum by the lighting industry. Scandium is considered the ideal material for its use in this application and is not typically substituted.[1] [2] [3]

Scandium triflate (aka. trifluoromethansulfonate) is used as a Lewis acid in organic chemistry. A Lewis acid by definition is and chemical species that is able to accept lone pair electrons. [4]

Scandia-stabilized zirconia is used as a high-efficiency electrolyte material in solid oxide fuel cells. It is not the only choice for this application; other popular materials include yttria stabilized zirconia and gadolinium doped ceria. [5] Fuel cell markets have been predicted to generate increased scandium demand in the future. [3]

Dysprosium scandium oxide is used as a semiconductor and in photo optics. [7]

46 Sc, which is radioactive, is used for isotope tracing in crude oil analysis. [1]