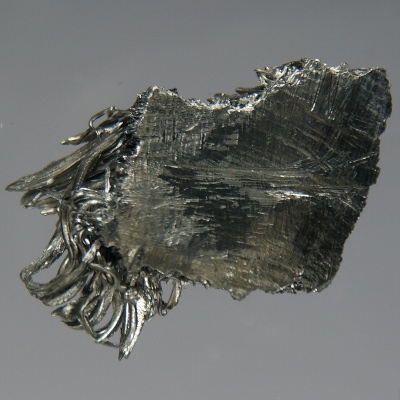 Yttrium is a silvery-colored transition metal. It is element no. 39 in the periodic table and has the symbol Y. Yttrium (as yttrium oxide) was first found in 1789 by Johan Gadolin in the mineral ytterbite, which had been discovered in 1787 near Ytterby in sweden. The element yttrium was first isolated from the mineral in 1828. Johan Gadolin was a noted Finnish scientist, after whom the element gadolinite was named in 1800. [1]

Yttrium is quite stable in air when in a 'block', because a thin layer of oxide forms on its surface, which protects it from further oxidation. This phenomenon also happens with aluminium and some other metals. If Yttrium is shaved or powdered, it can be ignited at over 400ºC. [1]

Yttrium is almost always found in minerals also containing lanthanide elements. It exhibits very similar qualities to the lanthanides (elements #57-71), to which is has a similar atomic radius; and so it is sometimes grouped with them as a "rare earth element." Elements in the periodic table usually exhibit strong similarities to others in the same vertical group - however in this regard yttrium is different, and it does not correspond closely to scandium, the element directly above it in the table. [1]

It should be noted that "rare earth elements" are not necessarily all that rare: Yttrium is the 28th most abundant element in the earth's crust with about 400 times the quantity of silver. Trace amounts of yttrium are found in soil, water and in lunar rock. [1]

Yttrium has no known biological role, although exposure to yttrium compounds can cause lung disease. Yttrium is however found in small quantities in the living tissue of organisms but it seems that at such small concentrations, they are not thought to cause any harm. It is also found in trace amounts in plants and seeds. [1]

Yttrium is difficult to separate from the other rare earth elements and of the 600 tonnes (2001) of yttrium oxide produced per year, only a few tonnes of the pure metal are created. As a pure metal, yttrium does not have much use, but yttrium compounds now have a number of uses. [1]

Until the 1980s, yttrium lapsed in relative obscurity. Then scientists found that yttrium barium copper oxide - YBa2 Cu3 O7 - became superconducting at -178ºC; the highest superconductive temperature yet exhibited and high enough to mean that liquid nitrogen, rather than liquid helium, could be used to keep the material in the superconducting state. [2]

Yttrium is used in the manufacture of synthetic garnets, and yttrium aluminium garnets (or YAGs, as they are sometimes known) have numerous uses. Prior to the rise of cubic zirconia, YAGs were used as a diamond simulant. Produced by the Czochralski process, they have a high hardness (8 Mohs) and may still sometimes be found in use as artificial gemstones. YAG has the chemical formula Y3 Al2 (AlO4 )3 . YAGs can be created in different colors by the addition of other elements - in a similar manner to that in which natural gemstones may be colored by mineral "impurities". [2] Yttrium is also added to cubic zirconia in order to add stability. [1]

Yttrium is added in small quantities (0.1 - 0.2%) to alloys in order to improve workability and improve crystallization and oxidation resistance parameters. It reduces the grain sizes of titanium, zirconium, molybdenum and chromium. [1]

Yttrium is useful in glassmaking, and is used in camera lenses as it can improve shock resistance and thermal expansion characteristics of the lens. [1]

YAGs with an addition of neodymium are the most used lasing medium in solid state lasers, one of the most common laser types. [3]

Yttrium oxide and yttrium orthovanadate are combined with europium in order to create the red phosphor used in the cathode ray tube. However CRT monitors have largely been replaced now by flat screen monitors. [4]

Yttrium has only one stable, naturally occurring isotope - 89 Y - however a radioactive isotope, 90 Y has been created - and this has a number of medical uses. 90 Y compounds are used in cancer treatment. Also, needles made with 90 Y have the ability to cut more precisely than scalpels and have been used in spinal surgery. YAG lasers are also used in cosmetic skin resurfacing and other new surgical techniques. [1]